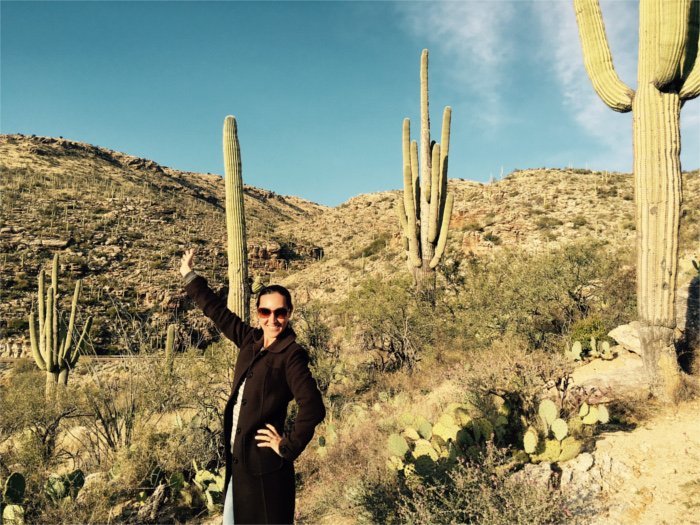 The Sonoran Desert is one of the world’s unique deserts, and the saguaro cactus is its mascot. Until we spent a couple of weeks in Tucson last month, I had never seen this fascinating plant up close or been able to touch it, and I certainly had no idea how much it means to the desert ecosystem it calls home.

So call this my ode to the saguaro (pronounced “sah-wah-roh”). I’m only starting to learn about it, so I’d love you to share any thoughts or knowledge in a comment. I’d also love to know where I can see your favorite specimens!

Here are six reasons to be amazed by the Sonoran Desert’s saguaro cactus:

I had never seen cacti as large as the ones I saw in the Sonoran Desert. When we first arrived in Tucson and started hiking just south of Tucson Mountain Park, Eric and I took the kind of epic cactus photos that get tons of likes on Facebook. But when we found out how long it takes a saguaro to get that tall, our minds were blown.

I’ve found contradictory growth rates, even among the literature available from Saguaro National Park, but here are some facts about saguaro cactus growth rates based on information from the National Park Service:

This insight gave us a whole new appreciation for the larger saguaros we would spot when we were out hiking. We started guessing how old each one was, based on its size and whether it had arms or not. We also felt a kind of reverence for the time they had lived, and how important their preservation is.

2/ Differences From Cactus to Cactus

Each saguaro cactus is unique. Some have arms that end up flipping down and pointing towards the ground, giving them an almost comical look. Some have many arms on one side, and none on the other. Some have no arms at all, growing to the sky as a lone column.

I find it fascinating that scientists still have no idea why some saguaro have dozens of arms, while others have none.

You will only find the saguaro in southern Arizona. But within its native ecosystem, it provides a home for many desert species. Gila woodpeckers and gilded flickers create holes initially. Then after they’ve moved on, owls, flycatchers and starlings adopt the abandoned houses.

I’m amazed at how these birds can navigate past the saguaro’s spines to create their homes. I can barely fit my hand in sideways to reach the surface of the cactus, without hitting the spines on either side. The narrow shafts seem as tough as nails. I’d really like to watch these talented, winged builders during their (de)construction process, to see how they do it.

The saguaro cactus is the water cooler of the Sonoran Desert, bringing all kinds of life forms together. When the cacti flower between April and June (which won’t happen until they’re about 70 years old), bats congregate to feed on the nectar, as do hummingbirds. As the flowers die and fruit appears, the bats are back for another feast. This process is so important to the saguaro’s continuing existence because its flowers lack the ability to self-pollinate.

Of course, I haven’t even started to discuss how much the saguaro fruit meant to the native people of Arizona, who conducted a ritualistic annual harvest.

Desert survival has always been fascinating to me, and the saguaro’s techniques top the list. It uses two different types of roots to access moisture. The taproot can be sent five feet underground–straight down–to reach the water table. Right near the surface, usually only about three inches from it, a twisting network of roots spread out to capture rain water.

The saguaro’s ability to store water is vital. Spongy tissue allows a fully-grown saguaro to take in up to 200 gallons during a heavy rain! I’ve seen timelapse videos, and the cactus visually expanded as it took in water. As an extra layer of protection, a wax coating on the outside prevents water loss.

6/ How They Stay Upright

If you look at a large saguaro with arms pointing all over the place, you can’t help wondering how it keeps from toppling over. To make it even more impressive, a fully-grown saguaro (probably somewhere around 40 feet) can weigh over a ton when it’s full of water! 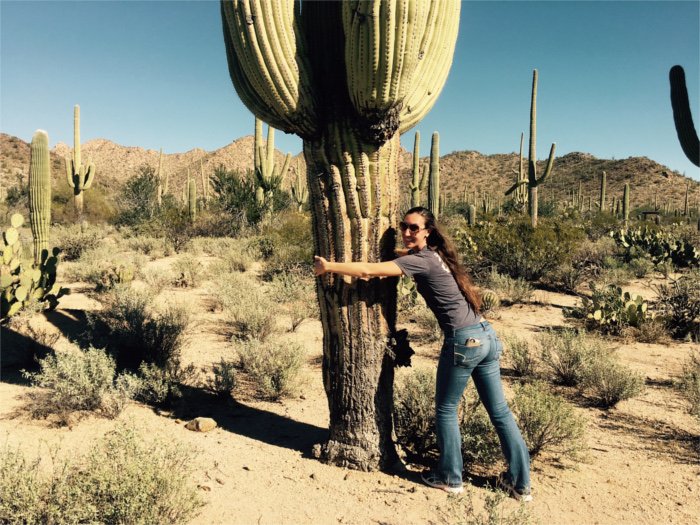 I am truly amazed by this beautiful creature of the desert. I hope these six points of insight will make you stop to appreciate a saguaro next time you’re in southern Arizona. And hopefully we can work together to preserve them, and teach the next generation to grant them the respect they deserve.