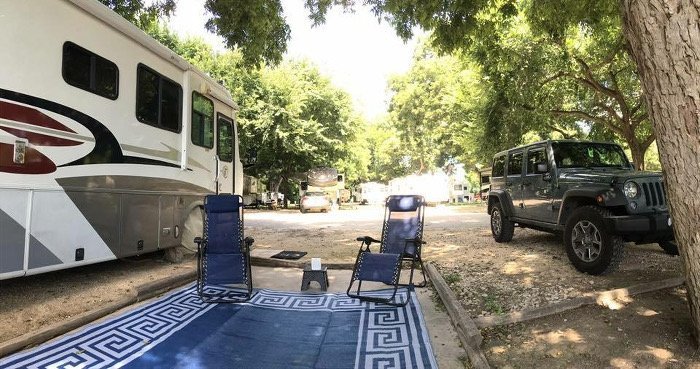 We have an RV travel rule. We don’t go farther than 250 miles in one day, and then we stay put for two weeks.

But there’s an exception to every rule. And for us, family is it. We had a campground reservation in the Seattle area through July 23, where we were spending the summer with our kids and Eric’s mom. But I had a long overdue OBGYN appointment scheduled in Austin, TX for July 28. With these priorities in place, we had no choice but the insane: cover 2,300 miles in only five days.

Eric woke up with our boys at 3-something a.m. on July 23 and headed to the airport for their 6:45 a.m. flight back to California. Once he saw them off at the gate, he hung out in the cell phone lot. Our RV park was about an hour away with traffic, so it didn’t make sense for him to come home just to turn around and go back to the airport. I asked him to try to get some sleep while he waited, but he wasn’t able to.

After I saw the boys off, I did go back to sleep for a couple of hours. Once up again, my goal was to get Meriwether ready to travel. When Eric got back with my dad (who had an extremely early flight from Corpus Christi, TX), all he had to do was unplug the electricity and store our jack pads. We fueled up at a nearby truck stop and hit the road! I was co-piloting with my dad in Meriwether, and Eric was driving ahead with Guardian (our new Jeep).

Just outside Couer D’Alene, we had an extremely close call on an uphill grade. As we rounded a blind curve, there was a motorhome at a dead stop right in front of us, sticking out into the right lane we were in. Fortunately there was no one to our left at that moment, so my dad was able to change lanes and avoid a collision.

Both my dad and Eric decided to pull over onto the shoulder and go back to help. The motorhome pulling a large van had lost its transmission (maybe?) and refused to go any way but reverse. But because of the towing mechanism, the van had jackknifed and was keeping the ensemble from backing up out of the interstate.

Eric gave hand signals, and my dad got into the van to maneuver the steering wheel as the motorhome backed up. The van was still right in the line of traffic, on the other side of the blind curve, and Eric was vulnerable standing out on the shoulder. I was sending up prayers as I watched this extremely dangerous situation, asking God to protect the two most important men in the world to me.

There was no cell service, so we couldn’t call for help from where we were. But in the middle of all this, a pickup truck appeared and pulled onto the shoulder. Out jumped a woman in an orange fluorescent vest with one of those traffic signs used at construction sites. We had no idea who she was, and she didn’t speak to Eric or my dad. Instead, she walked to the other side of the blind curve with her sign, cautioning oncoming traffic to slow down. To this day, I consider her a visiting angel.

It was slow going, but the motorhome and van eventually inched off the roadway. As we left, we promised to call for help as soon as we had a signal again. By the time we did, the police had already received calls from other motorists.

We had lost time and it was nearing dusk. As darkness fell, we pulled into Cabin City Campground in Lolo National Forest in Montana and hoped there was a space open. As it turned out, there was, though most of the sites weren’t large enough for a 40-foot rig.

Our spontaneous spot for the night was absolutely beautiful. Though it was getting late and everyone was tired, we didn’t regret getting out our chairs and propane fire pit. We spent an hour or so chatting and relishing the isolated silence of nature.

As a side note, I wish we could always stay at places like this. Unfortunately, Cabin City Campground doesn’t have a cell signal, which isn’t uncommon for national forests. Because of that, we wouldn’t be able to stay during the work week.

Sunday, July 24, was relatively uneventful. Eric and I accidentally slept in an hour because we were using my phone for an alarm, and it hadn’t switched over to Mountain Time yet–even though we were in Mountain Time. We needed to cover a lot of miles to stay on course. I was restless in the passenger seat (I’m never in the passenger seat when we travel!), not to mention the fact we were traveling almost three times our normal 250/mile/day limit.

My dad and I attempted to stop at Little Bighorn Battlefield National Monument, but the $20 entry fee was too much considering we just wanted to get out and stretch our legs. My dad was indignant because there was no entry fee or infrastructure when he visited decades ago. But I’m grateful the National Park Service has stepped up to preserve this important site.

Meriwether barely made it through the gate posts. Super close. We took the circular drive to exit and get back on the road.

We stopped at the Walmart in Casper, WY for the night. Eric had already been there for a couple of hours, doing his work for Monday so he could focus on driving. I can’t imagine doing brain work after driving more than 700 miles, so I had sincere respect for his perseverance and dedication to our clients.

It was dark, but the Walmart parking lot was well-lit. Normally we wouldn’t put out our slides at a Walmart (or truck stop, or rest area). But we needed to put the large slide out so my dad could use the pull-out sofa and get a good night’s sleep. Fortunately, we were able to pull the driver’s side along a curb, so the slide was over a grassy lawn and out of the way. We grabbed a quick, late dinner and got to sleep. As you can imagine, both my dad and Eric were exhausted from the long drive.

Because of our big push on Sunday, we only had 275 miles to northwest Denver where we were all stopping to see my youngest brother Timothy and his wife Hannah. My mom was flying in to drive the rest of the way south with my dad. I traveled with Eric this time, since I had to work. Though I first used the technology years ago, it still amazes me that I can connect my laptop to the Internet from a hotspot while blazing down the interstate.

Originally we were planning to park Meriwether at a Walmart or truck stop for the night. But the weather was warmer than we expected, and we realized we needed power to keep Rhythm (our cat) comfortable. We were able to call up our friends at Prospect RV Park, where we stayed last summer, and fortunately they had a spot for us. We hooked up and headed to Golden to have lunch at Woody’s Pizza, one of our all-time favorites.

My dad was getting a beer at the bar when Timothy and Hannah arrived. Shortly after, my mom came in, giggling in an indecipherable way. The explanation walked in behind her…my parents had flown my 93 year old grandfather down from Toronto as a surprise for Eric and me (everyone else in the family knew about it except us). We shouted so loud with glee and surprise that the entire restaurant looked our way. Someone even asked Eric, “Who is that?” because they thought my grandpa must be a celebrity. He is, to us.

The rest of the day was wonderful. We went back to Timothy and Hannah’s house, where her parents joined us for dinner. The time went by too quickly, but we were grateful for what we had. Eric and I spent the night in Meriwether, while my parents and grandpa stayed at the house.

Before leaving Denver, Eric and I fueled Meriwether and secured him at a nearby truck stop. My parents and grandpa picked him up a few hours later, after spending a relaxing morning with Timothy and Hannah.

Just across the Texas border, Eric and I had lunch in the tiny town of Dalhart. After seven months away, it felt good to be back in our home state. There’s just something about the Texas atmosphere that we love.

A few hours later, we made it to Plainview, TX (510 miles from Denver) and used Hotwire to book a hotel. We grabbed dinner at a Mexican restaurant and vegged out in bed for the rest of the night. We were spent, especially Eric with all the driving he had been doing.

Meanwhile, my parents and grandpa spent the night in Canyon, TX. It was dark, so they had a hard time finding a place to park. They ended up in an empty lot.

We completed our journey on Wednesday with the final 450 miles to San Marcos, TX, after 2,300 miles and five days on the road. The drive through Texas Hill Country was beautiful, especially since we brought rain and cooler weather in with us. We had a few hours to kill before the rest of the gang arrived with Meriwether. They came in at dusk and we got parked at Pecan Park Riverside RV Park.

We invited them to spend the night, but they needed to get home to Corpus Christi. I drove them down to San Antonio, where their car was parked at the airport. Then they had another two and a half hours to go before home.

I understood the urge to be home. After five days of travel and upendedness, it was a relief to nest and be settled again.

Reflections on Our Intense Repositioning

I hope we never have to do anything like this again. Eric and I definitely feel validated in our RV travel rule. It’s a healthy limit for our sanity, and limits are vital for anyone who wants to maintain full-time travel without getting burnt out.

We both grew in respect for my dad. He’s a professional driver who regularly pulls long hours, with a longer and heavier rig than Meriwether, having to know hazmat rules and many other regulations that surround his profession. We couldn’t ask for a more capable person to entrust our home to, and we’re so grateful he was willing to take a week off work to help us. He was so careful with the many mechanisms of the RV, and my mom kept everything tidy for our homecoming. We wish they had time for more “fun,” especially with my grandpa there. But we hope to make more opportunities in the future.

All in all, we’re thankful both our RV and Jeep made the journey without mechanical issues. We did have trouble with one of Meriwether’s bays opening (now fixed) and faulty turning signals (not fixed yet). But those are minor issues in the big scheme of things.

I think we’ve made up for the insane trip by staying in one place for two months, with one more month to go before we move again. Now if we can just remember to run our engine and generator to keep them in good working condition!