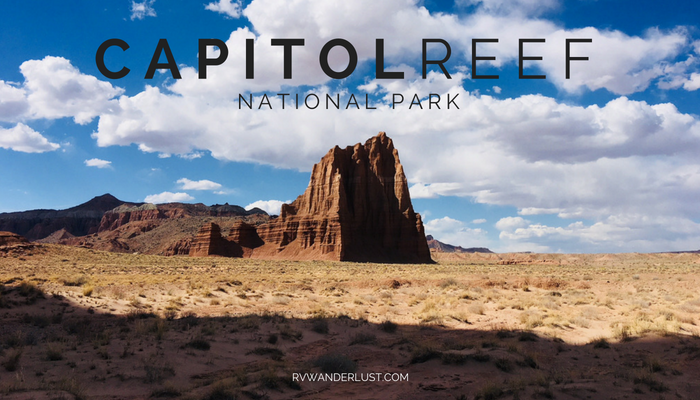 This one required some special doing. We left Toquerville after work on a Friday, and drove 200 miles through Fishlake National Forest and along the edge of Manti-La Sal National Forest. We traveled through beautiful farm land bordered by grass-covered hills. I had no idea there was a place in the United States that looked like this. It reminded me of photos I’ve seen of the Scottish Highlands.

And then the grassy hills gave way to brilliantly colored, jagged rock. Through the small town of Torrey, with its inviting restaurants, outdoor adventure companies, and local motels. We used the Jeep to scout our dry camping options and ended up in Capitol Reef Overflow, about half a mile outside the boundary of the park.

Where We Camped Near Capitol Reef National Park

To get into Capitol Reef Overflow, we drove our 40-foot Class A into the national park and used a turn-out to turn around. The right turn into the camping area was smoother than a left turn would’ve been. It’s a bumpy entry.

Speaking of which, the whole camping area is fairly rocky. There were a ton of Class Bs, some truck campers, some Class Cs. I may have seen a shorter Class A, but we were definitely the only diesel pusher. We don’t have much clearance and are not very maneuverable, so we didn’t go far off the road.

But it’s all good. There really isn’t a bad view anywhere, with gorgeous vistas and rock formations in almost every direction. That first night, we lit our propane fire pit and sat outside, talking about the future and our plans. It was pretty perfect.

We hit Capitol Reef National Park early the next day. It was cool to be close by–we’d never camped so near a national park before.

The visitor center was first. We watched the short video, got a park map, bought a 4×4 trail guide, and got some suggestions from the rangers.

From there, we started exploring the area around the visitor center. Fruita Historic District begins right across the street, with orchards along the Fremont River that date back to the original settlement in the 1870s. On a sunny day, it’s beautiful to wander around the historical buildings and fields on foot.

But we had different plans. Eric really wanted to drive the Cathedral Loop Road with our Jeep. High-clearance vehicles with sturdy tires are needed for the trail, so it’s a side of the national park many people never get to see. On our way to the turn-off, we stopped at the Petroglyph Panel and hiked the popular Hickman Bridge Trail.

The trail is only 0.9-miles one way, with one gradual ascent on the way out. It was all in the sun even early in the morning, so take plenty of water and wear sunscreen. Only three days after hiking Angel’s Landing, there wasn’t much comparison. But it was our first arch in Utah!

Cathedral Loop Road is 96 miles total, starting from the visitor center. The actual turn-off is 9.8 miles down 24 West. There’s a fun river ford, where you have to drive through and across the Fremont River at a shallow point.

The highlight of the 96 miles is Cathedral Valley, the road’s namesake. It’s mind-blowing, with towering walls and stunning rock formations. The $2.99 trail guide we bought at the visitor’s center offered detailed insight on the geology and history of the area.

We stopped for photos at Gypsum Sinkhole, Glass Mountain, and the Temples of the Sun and Moon. The sights are awesome to the very end. As we pulled back out to 24, we admired the gray, furrowed slopes made of Mancos Shale.

Eric and I have been talking about Cathedral Loop Road ever since. Even though the adventure took a full afternoon and meant we couldn’t see the other parts of the park, it was an amazing experience.

Where We Ate Near Capitol Reef National Park

There are a surprising number of local restaurants in the little town of Torrey, though many of them have mixed reviews. We had a great, casual hamburger meal at Slackers, where we met a family and talked about fulltime travel the whole time. We also ate at Capitol Reef Inn & Cafe, which we wouldn’t return to due to the service and food.

You have to be purposely going to Capitol Reef National Park to ever get there. But it is so worth it. The place is gorgeous with its vibrant rock formations, twirling river, and arable land.

After our day there, Eric ranked Capitol Reef as his favorite Utah national park, with Zion second. I put Zion first because of the way it spoke to me, but Capitol Reef was a close second.

What a beautiful country we live in.