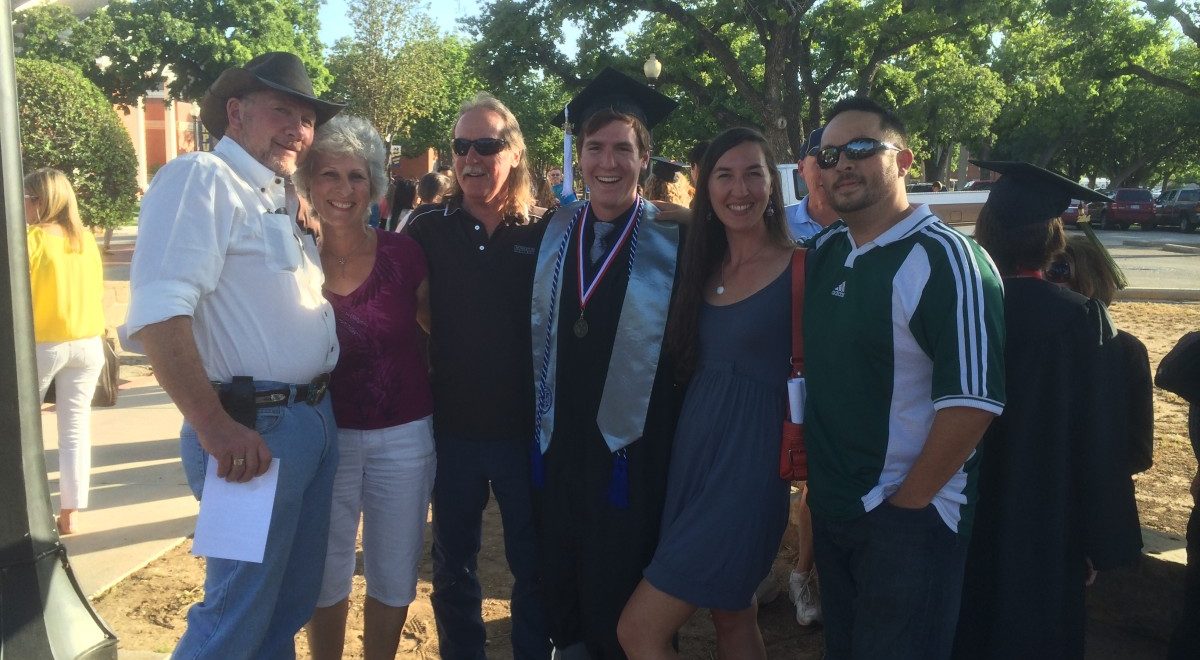 11:13 – Normally we update the Captain’s Log daily, but these past few days have been very busy for us! We even had a reality TV show star stop by our rig!

Our last update was on Brittany’s birthday. Since then, we’ve attended two graduations, several dinners, and had a cookout at Meriwether with family.

11:17 – So for a recap, we’ll start with the fact that driving a big 40′ RV in high winds pretty much sucks. Also, if you get pulled over by a Texas State Trooper, it is much more advantageous if the prettier half of your relationship is driving.

Read: “I only got a warning.” ~ Brittany #MustHaveBeenHerSmile

But we made it “home” to Austin, TX and it has been a busy past few days.

So we need to back up a bit to play catch up.

11:20 – Let’s start by talking about the reality show TV star. Have you ever watched or heard of the show ICE ROAD TRUCKERS? Well if you have, then you’ll probably recognize Ice Road Trucker Alex Debogorski and his contagious laugh.

Alex has been a star on the show for all 8 seasons, and is considered to be the “Original Ice Road Trucker.”

What you may not know is that Ice Road Trucker Alex is Brittany’s uncle. Yep.

11:26 – Now for a quick family intro on Brittany’s side of the fam: Brittany is the eldest of her siblings and has two younger brothers, Adam and Tim. Brittany’s parents are Dave and Simone. Simone didn’t know that Dave’s name was Dave until right before they were married, she thought it was Kelly, but that is another crazy story for another day. Simone’s maiden name is Debogorski and her oldest brother is Alex, the Ice Road Trucker.

Adam got married in March and now lives in VA with his lovely bride, Linia. Tim has a serious girlfriend named Hannah who is like royalty at Howard Payne because her uncle is the President of the University.

Which I think makes Hannah a Duchess or something. Are you keeping up?

So all that to say that Tim (Brittany’s youngest brother and my brother-in-law) graduated from Howard Payne University on May 10th, and the members of Brittany’s family that could make it down for the event did.

So on May 9th, Brittany’s parents, Tim, Hannah, Uncle Alex and Brittany and I went to lunch at Chili’s before the festivities began. That was followed by “Chime Out” which is a long-standing graduation ceremony at Howard Payne. Adam flew in from VA as a surprise to Tim which was really cool, then we went out to dinner with a ton of people.

After the second graduation ceremony, Brittany and I raced off to buy stuff for our family cookout. It was the first time that Brittany’s parents would see the RV so that was a pretty important moment too!

Then we had a really awesome time with Dave, Simone, Uncle Alex, Adam, Tim and Hannah. It was the highlight of our trip to have the family together and beyond special.

11:55 – So on Sunday we made the trek to Austin. We left at 9:30AM and arrived at 12:18PM. I drove Meriwether and Brittany drove Smaug. I drove straight through but Brittany had to stop for gas. So in trying to catch up to me, Brittany got pulled over by a State Trooper. I’m sure she flashed her pretty smile as she thankfully got off with a warning. She eventually did catch up to me about 48 miles outside of Austin.

From there, I followed her into Austin Carefree Lone Star RV Park and we got settled in spot #64.

11:58 – Upon arrival we were greeted by Cliff and Jane, two other RVers who are part of RVillage.com as we are. It was nice to hear their story and hang out for a bit.

11:59 – We ran errands including getting Brittany a brand new 15″ MacBook Pro which she has named “Selah.”

After that, we came home, went swimming and grillled up some dinner. All in all a great day!

Remarks – Life is so short and we can never get back time, my hope is to never waste any of it. Not a moment. I’m blessed to have the opportunity to be a part of Brittany’s family and to have spent this precious time with them. I truly treasure them. ~ E

17:52 – What a day! Got regular work done this morning, then spent the afternoon working on a PowerPoint for next week’s social media presentation.

Eric ran some errands, including getting a hitch put on Smaug, so we can use our Yakima bike rack. Yay! No more bikes taking up ALL the rear seat area! We need to get a tarp to shield the bikes from weather damage, which they experienced too much of at our apartment in Austin.

Also got our franchise tax report filed to the State of Texas. It’s for our LLC, due every year on May 15th.

And yes, I got a new computer – my first Apple. I honestly wasn’t terribly excited about learning a new system and transferring all my files. I saw the change as more of a necessity than anything. But now that I’ve spent a day on it, I have to admit that it is fun. I’m looking forward to learning more shortcuts, but I have to spread out my learning, so I can remember them all!

Getting a cold front…can’t believe the high for T/W is 72 degrees! This is May in Central Texas, right? -B