11:39 – As usual, our lives are filled with adventure at every turn. This week we canoed right past a 5-6 ft alligator and then went swimming in a natural spring-fed pool. We’ve been so busy, again, I’ve had to force myself to sit down and write a Captain’s Log so we are able to look back and reflect on our adventures someday.

Last Friday the 20th Brittany and I made an extremely long road trip from Milton, FL to Somerset, KY to pick up the kids. We left at 6AM on Friday and got home to Meriwether just after 2AM on Saturday the 21st. But mission accomplished we had our four loves with us. Now what to do for the next glorious four weeks.

11:44 – We only had one full day in Milton which was just outside the gates of NAS Whiting Field. So we spent it at the pool of course. The kids were happy to start off the summer with a swim. We ended the night with a cookout on our Weber Q2200 grill… cheeseburgers  were on the menu.

11:47 – On Sunday we drove from Milton, FL to Marianna FL a distance of 125 miles according to Google Maps. However Meriwether’s odometer shows that we traveled 202 miles. Which again proves that we are having issues with our odometer. It makes me wonder how many miles are actually on Meriwether and how long this issue has been happening. No idea what to do about it either, so any readers out there with knowledge on this, please comment below and share your wisdom!

In other news, we have a few other items of repair that have come up. Crewmember Silas discovered a small leak after a heavy rain. The leak is right above the drivers seat on the ceiling. It isn’t coming from a window. Not sure how to diagnose this but we’re going to have to figure it out. Other than that, the turn handle for the antenna broke, one of the drawers in the bedroom is broken, and one of the blinds near the dinette burst it’s string and won’t retract. None of the kids are fessing up to that one, but it was working fine before they were here. I’m not upset, it’s just frustrating to have these things going wrong. But it’s all part of the RV lifestyle. If you can’t handle the bumps in the road, stay off the road.

11:54 – We arrived at Florida Caverns State Park on Sunday the 22nd. The spot we’re in was pretty tight to get Meriwether into. It took several tries and some significant help from Navigator Brittany and Crewmember Darius to guide me into the space. But we made it!

The park is gorgeous. We’re surrounded by lush vegetation and the smell of campfires everywhere. The folks around us are friendly and life is good. We wanted our first week to be a relaxing week and so it has been. Brittany and I still need to work for our clients and the signal out here in the park was pretty horrible. (At least we thought it was. Turned out to be our Millennicom device.) So, on Monday, Brittany and I went to a Cafe called Gazebo which is in the nearby town of Marianna. We worked until about 1:30PM. The good thing about having mostly teenagers is that they love to sleep in. So by the time we got home they had just finished up cleaning up after lunch and we were able to spend quality time with them the rest of the day.

When Brittany and I got home, we decided to take the kids canoeing. The park offers canoeing at a rate of $20 per canoe per half day (4 hours) and $25 per canoe per full day. Each canoe seats 3 so we got two canoes and headed out.

Brittany, Silas and I took one canoe, while Darius, Arianna and Javen took the other. We paddled upstream for about an hour and then back down. It was Silas’ first canoeing trip ever. He did great, even oared the entire way back downstream. During our trip we saw a gator sitting on the bank, the kids in the other boat saw a snake on a log and we pretended like we were the first explorers ever to go up that stream. It was a ton of fun.

12:08 – Yesterday (Tuesday) we were able to work from home. We figured out that our Millennicom device had been throttled, which it isn’t supposed to be, and we had it reset. All is back in working order now, and though our AT&T cellphone service is horrid out here, the Verizon data we’re getting from our Millenicom is working just fine. So after working for the early part of the day, I decided to take an early day while Brittany continued working. I took the kids out to the swimming hole here which is about 1/4 mile down a trail from the campground.

The water was cool and refreshing and we brought floaties. So the little boys (Javen and Silas) and I decided to brave the swimming hole. My two older kids (Darius and Arianna) stayed out on a blanket and did whatever teenagers do on their phones all day. I keep trying to tell my older two to enjoy this time and get away from their devices. Sometimes they follow daddy’s advice but mostly they remained plugged into their cyberworld. Someday they’ll learn that daddy was right and that we should have enjoyed our time together more. But hey, I was a teenager once too.. I get it.

The little boys and I had a blast though. We splashed each other, played 20 questions and then they took turns running and jumping off the little dock.

It was a great time. Afterwards we went back to Meriwether and had dinner. Darius decided to go for a bike ride which really made me happy. He took off and the rest of us hung out in Meriwether playing a game called Heads Up. When the game was over, Arianna asked if she could take the other bike and this too made me really happy. Darius and Ari took off and the little boys, Brittany and I ended up playing Munchkin Pathfinder. Brittany won. Actually she decimated us.

After our game, we watched Spider-Man 2 and then I went for my evening walk. Oh I’m down 11 pounds since May when I started using my FitBit.

My clothes are starting to feel loose again.

12:22 – Today we’ve been hard at work as usual. The kids have been hanging out in the living room. I love hearing their voices while I work, every little laugh and giggle blesses me. They are great kids and I’m blessed beyond measure. We hope to take the cavern tour on Thursday and then on Friday we head to Orlando to pick up Grandma Lety.

Remarks – My children have not really captured how important general knowledge is and I fear that time is passing them by so quickly. Obviously, I’m to blame in this. When they were young, I worked all of the time and didn’t spend the time with them that I should have. Though I can’t turn back the hands of time, I can do the best I can now to have fun with them and educate them. I’ve started a game where I pick a person/topic each day and they have to research it and then the following day they each have to tell me something cool or interesting about the person/topic. So far we’ve covered Geronimo and Heinrich Himmler. Today’s person of interest is Manfred Von Richthofen.

In addition, I’ve been teaching my kids about the rhythm of life. I’ve encouraged them all to have a quiet time each morning. To pick one book of the Bible and read a chapter each day from that book as the first thing they do when they wake up. Darius chose the book of Job, Arianna chose Joshua, Javen chose Deuteronomy and Silas is in Genesis. Meanwhile Brittany is in Romans and I’m in Luke. ~ E

The round trip drive to Kentucky and back on Friday/Saturday was a marathon. Eric took the first shift, allowing me to work from the passenger’s seat once we hit I-65. We switched off throughout the day. I eventually took the last shift: about 10:45 PM-2 AM. I managed to survive with one of these: 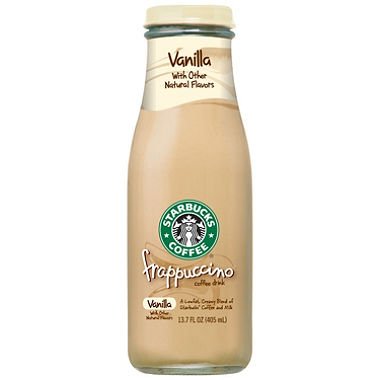 It was a beautiful thing to rest in on Saturday with no agenda for the day. Eric and I have become so used to rising early on Saturday – our regular travel day. We’re looking forward to extending our stays starting in late July, which will mean more restful Saturdays!

In addition to our pool visit on Saturday, Silas and I knocked out the first wave of grocery shopping at the Whiting Field commissary. He’s a fabulous helper. Then I took Ari to Walgreens to help her with a super secret project: creating a belated birthday and Father’s Day gift for Daddy by printing out photos they took last week.

I think Daddy loved his gift: 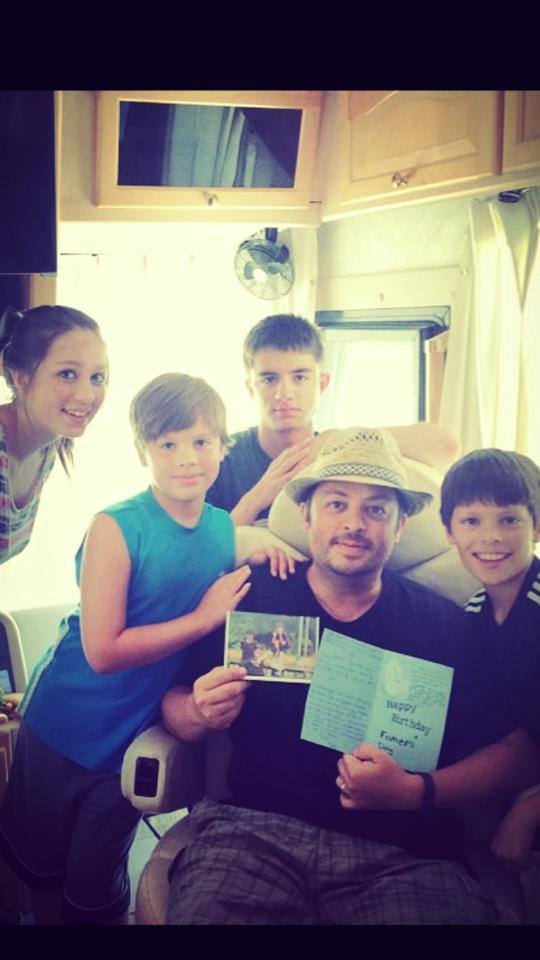 Saturday after swimming, grilling, dancing, and tons of bug spray, it was time to get all four kiddos through the shower. By some miracle, they all got through without using up the hot water. My friend Alana asked me on Facebook whether they turned the water off and on while showering, but they didn’t – they left it running. Our 10-gallon hot water heater is good to us.

However, Eric had closed the valve on the grey water tank in preparation for our Sunday morning departure. We managed to fill up the tank and Eric had to empty it slightly after showers on Saturday night, so that the water would drain out of our tub! We’re still surprised that the grey water tanked filled up, but I did do laundry, and we did wash dishes and take a lot of showers. A few months into our full-time adventure, we’re still trying to get a handle on how much our tanks hold compared to our lifestyle.

Sunday morning, we had a sweet devotional time as a family. Eric led us through a study of the Prodigal Son, and we all marveled at the deepness of the Father’s love for us.

During our short trip from Whiting Field to Florida Caverns State Park, Darius traveled with Daddy and the other three kiddos came with me. It gets hot in Meriwether during travel days. We could run the generator to get AC, but we choose not to use the fuel to do so. When Ari, Javen and Silas figured out how hot it was going to get, they opted for the air conditioned Jeep!

Florida Caverns State Park is lovely. We’re still hoping to take advantage of some of the hiking opportunities, and we plan on hitting the cave tour on Thursday! -B