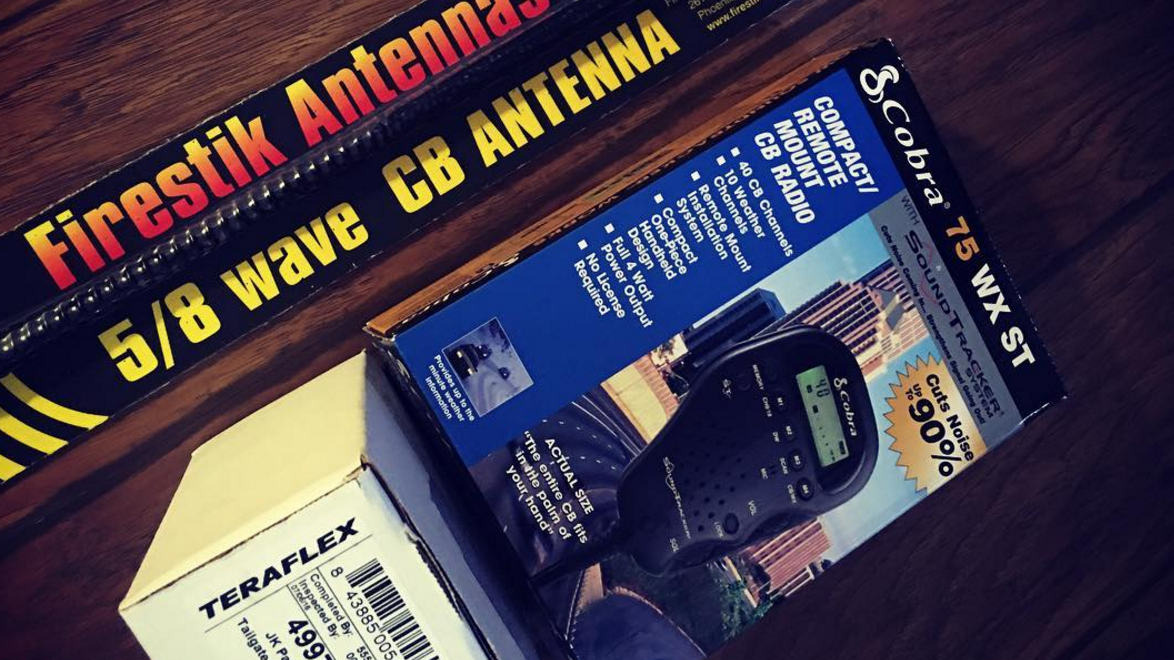 So you got your Jeep, you are ready to go off-roading, and you quickly realize you are the only one in the group without comms. Enter the Cobra 75 WX ST CB radio.

What the heck do I need a CB for? I have a smartphone.

Well Mr. Smartphone, if you are taking your Jeep where it belongs, you are going to be in areas with no cell coverage. On the other hand, if you are just planning on being a mallcrawler, you can stop reading now.

For those who want to take their Jeep places only Jeeps dare to tread, read on. You might say, “Ok, I get it, a CB is a good idea. But why this unit?” Well my friend, you are about to find out.

Anyone who has ever owned a Jeep Wrangler and modded it out for off-road adventures will tell you that space inside the cab is at a premium. The Cobra 75 is an all-in-one type unit that has all of the radio components right in the handheld mic.

In other words, the entire CB radio fits in the palm of your hand.

There is no radio box to install that you need to find a home for inside the vehicle. This by itself is a huge selling point for the Cobra 75. The compact, one piece, handheld design is optimum for off-roading enthusiasts.

Not only that, but because it is so small, it is easy to stow away for security purposes. People are always stealing stuff from Jeeps. So at least with the Cobra 75, you can disconnect it and lock it up. It actually features a quick disconnect for this purpose.

On top of that, the Cobra 75 has dual channel monitoring. So, say you are wheeling with a large group but you want to have a separate side convo with just a few friends to make fun of newbies like me, you can do that. Of course if you are savvy with your CB, the Cobra 75 also has a full channel scan feature so you can scan all 40 channels to see who’s saying what to who about whom.

Other features on the Cobra 75 CB include instant channels. With the push of a button you can be instantly switched to channel 9 or channel 19.

Channel 9 is really critical. Channel 9 is a restricted channel for emergency use only and roadside assistance. It was issued by the Federal Communications Commission in 1969. It is still scanned by police, fire and rescue units. If you are on a trail and in a bad spot you could try hailing on this channel first, then scan all 40 channels to see if anyone is within range followed by another broadcast on channel 9. Repeat this cycle until you get help if you are immobilized.

Channel 19 is the “truckers channel.” This is a great channel to monitor as you are going to and from your wheeling destination. Though it can be a bit rowdy at times, the truckers of America are an invaluable resource on the airwaves. From road hazards to stopped traffic; alternate routes to where the “smokies” (police) are hanging out. All great information to have on a road trip in an area you aren’t familiar with.

The range of your radio has more to do with other factors than the CB radio itself.

The length of your antenna (size matters,) the terrain that you are on (up on a clear hill is good, surrounded by dense trees not so much,) direction of travel of the person you are communicating with (same direction is good, opposite direction you’ll have limited time to speak.)

As a general rule, with a 4′ antenna (like the firestik) you should be able to get anywhere from 4-7 miles under optimum conditions.

The range limitations of the radio though is actually a good thing. If you could hear everyone communicating on Citizen Band radio at all times, you’d never be able to talk with your group.

Also folks on CB radios are good about passing the word along for people in emergent situations. So really you only need to reach the closest person to you in an emergency. To learn more about range, this is a great resource from CB World.

They say never to wheel alone. It is one of the cardinal rules of the off-road community. But there may be times when you are alone in an area with no cell coverage. In this case a good CB radio setup could save your life.

On the other end of the spectrum, when traveling with a group of off-road enthusiasts, there is something fun on being “in” the know of what’s happening on the run. The Jeep community is a close knit group and most seasoned off-roaders will have a CB in their rig.

The Cobra 75 is the number one selling CB radio on the market and for good reason. Whether you opt for this model or another, I’d encourage you to consider adding a CB to your off-road arsenal.