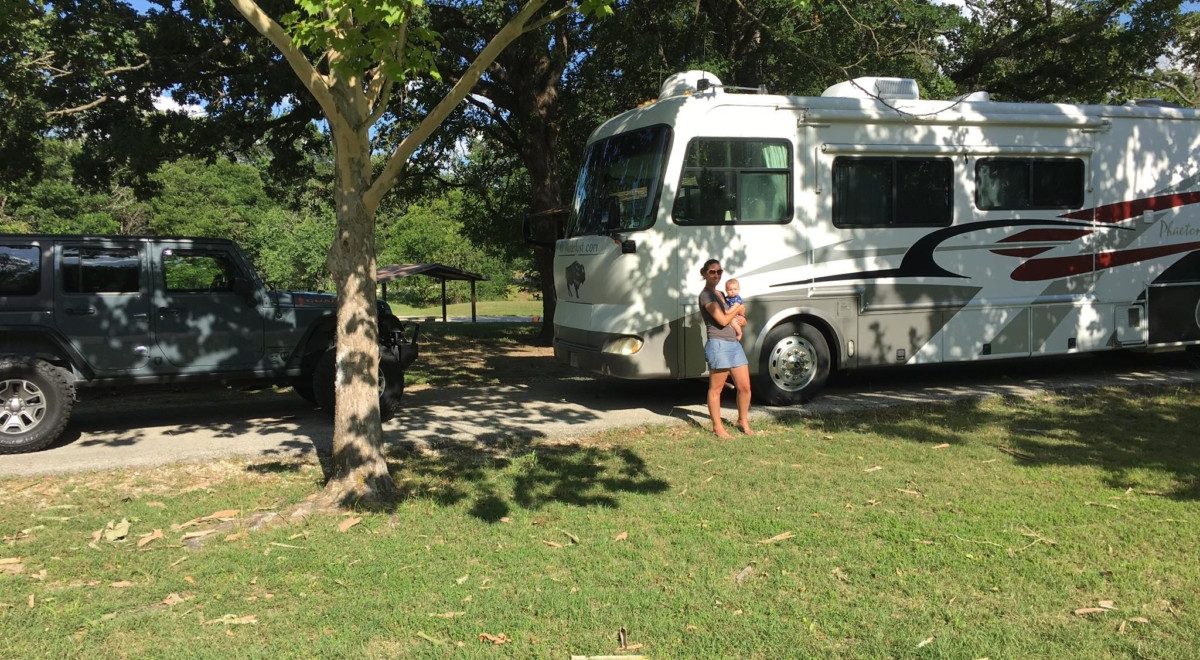 We knocked out our work this morning to get packed up. By 11:30 a.m., the RV and Jeep engines were running, and Caspian was in his carseat. I happened to look under Meriwether before telling Eric, “The front jacks are still down.”

The Jacks Are Still Down

We just went a couple months without rear jacks before getting the rear passenger jack replaced last week. Literally as we were about to back out today, we realized we had no control of the jacks. The back ones were stuck half way up, and the front ones were completely extended on the ground.

I’ll spare you the greasy details and just say we tried a lot of stuff. Daryl Waldrop, our friend and owner of Iron Horse RV, helped as always. He said to release the t-valves on each jack, and the jacks should retract so we could at least leave the site (another RV was coming in behind us). We didn’t turn the valves enough the first time, but eventually it worked and our jacks went up.

Meanwhile, a pep rally had formed around us: our sweet next door neighbors and their curly-haired grandson, a cheerful employee of the RV resort, and our friends, Craig and Shanna, who live full-time at the park. We appreciated the encouragement through the grueling hour and a half we were waylaid.

Eric also spent time on the phone with HWH, the manufacturer of our jacks. Ultimately, they weren’t able to diagnose the issue. But their best guess was a problem with our dash panel or the circuit board that controls the jacks. I also want to give a shout-out to Ken at Quick 2 Fix, a mobile RV company that services Central Texas, for all the help he’s given us today.

Jacks up, we had a choice to make. Go back to Iron Horse in San Antonio for repairs, or start our journey and get repairs somewhere along the way? We decided to get our northeastward journey started. We can’t use any of our jacks until we get this fixed, but our wanderlust is throbbing too strongly for us to stay put.

Where’s the Monopoly Banker When You Need Him

On the road and trying to decompress (never easy to do on I-35), we had to stop for diesel. We pulled into a Flying J north of Austin. I got gas in the Jeep, while Eric pulled around to the other side for diesel. But when he went inside to prepay, our credit card was declined. His debit card wasn’t working either.

It was a mess. I was trying to call the bank while changing Caspian and giving him a bottle. It’s okay if you want to picture me lugging around a 20-pound baby in a carseat with his bulky backpack on and a phone under my ear. Meanwhile, Eric had trucks pulling in behind the fuel bay he was blocking.

Not the first time we’ve had fraud alerts on our accounts due to our travels. Somehow, it always seems to happen at the worst times.

Okay, It Gets Better

We exited I-35 in Waco. We’re taking an extra day to make this drive to Hot Springs, so we have time for cross country. Part-way to Tyler, TX, in the middle of nowhere, we pulled into Oak Park, an Army Corps of Engineers campground. It’s only $10 for the night with Eric’s Access Pass.

There are 73 RV sites here, divided into loops. There’s only one other rig on our loop. It’s so peaceful, with tons of shade trees and a lake in the background. We’re less than two hours from Austin, but it seems so much cooler away from the city. We have LTE on our AT&T, so Netflix is on right now and we’ll be able to work in the morning. Check out is a lazy dazy 2 p.m.

Not for the Faint of Heart

We’ve had days like this before. The kind that catch you off guard and knock you off your feet. I recall that time Meriwether’s engine died at a fuel station in Florida, only five months into our full-timing adventure. Then there was that time our Jeep died in Portland when we had family flying in to see us in Seattle just a few days later.

Full-time RVing takes mega flexibility, and peace in those in-between places–where you don’t know how the story will end. It’s good. We’re back where we belong. We’re ready for tomorrow.