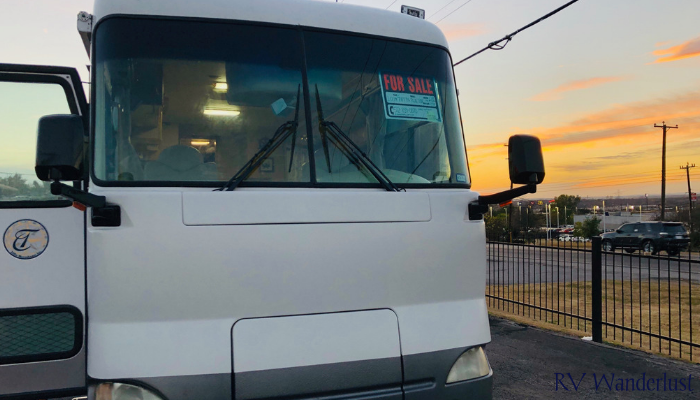 Only we would come up with the idea of moving out of an RV into a Jeep, hosting three family members within the week before our move, which was also the week before Christmas, while simultaneously planning a two-month trip into the interior of Mexico–as new full-time overlanders.

As we’ve shared, we went back and forth about selling Meriwether. Is it really wise to sell our only home out from under us, without any immediate plans to get a new one? But we jumped, forcing ourselves to be brave and chase our long-term dreams.

Nonetheless, our RV selling process was a bit idealistic. I had this fantasy that we’d mention it was for sale in a few places and the perfect owner would immediately pop up.

We announced our plans to sell via Facebook Live on Oct. 31. And nothing really happened. Lots of kind encouragement from our tribe, but only a few casual inquiries about the RV. Another month went by, and I was beginning to realize we’d probably have to put some real effort into selling. Like, you know, actually list it on RV Trader or something.

But we had other priorities (see first paragraph) and kept hoping the right person would see our social media posts.

Just over a month ago, as we were pulling back into our home base of Central Texas, I got a message from a dear RV friend in the area who we’ve known for a couple of years. She and her husband seemed genuinely interested in Meriwether–the most interested of anyone up to that point.

But after some back and forth, they said they needed to pass because of their own upcoming moving plans. It was okay. We wanted nothing but the perfect person for Meriwether and a positive experience for everyone involved. But we were left without any potential buyers, less than two weeks before our move-out date.

So we moved ahead with our back-up plan. Our RV mechanic had offered to keep Meriwether on his lot in San Antonio, giving tours to potential buyers and taking a consignment fee if he sold to anyone. We figured it was a good option to start with, at least for the time we were in Mexico. If it didn’t sell, we’d reevaluate on our return.

Moving Out of an RV Is Still Moving

So last weekend was cray-cray. On Friday, we picked up a U-Haul trailer to tow behind the Jeep, packing and loading as many things from the RV as we could. This may sound weird, but I was astonished by how much stuff I had. We had been so devoted to “spring cleaning” every six months, and I regularly donated items we didn’t use.

Problem was, we always focused on clearing the basement. Meanwhile, the bajillion cabinets inside hid a deceptively large amount of items. On moving weekend, I was genuinely, non-humorously angry at myself for keeping so much that I didn’t need.

We prepped Meriwether for transport, much easier than normal considering most of our stuff was in the trailer. My counters were cluttered with all the random items that didn’t belong anywhere, and I ended up stuffing them in bags because I had run out of boxes.

Ready to pull out, I turned on our tire pressure monitoring system from TechnoRV. My heart sank because our front passenger tire was at 10 PSI. Instead of 97.

Trouble was, the same tire had been low two weeks earlier. We thought it was just an install error with the monitoring system, since the air held on our trip from San Antonio to Austin after we filled it with our compressor. But apparently there was something more going on.

While Eric made a final Goodwill donation run, I called the San Antonio tire company that installed our Michelin tires in 2016. They weren’t open, but another location was–at least until noon. I raced down there (not really–I was safe) and they were able to get us in on short notice.

Turns out, my original hypothesis was right. One of the valve extenders we had to install, in order to get the tire pressure monitor to fit next to the wheel, was just the teensiest bit loose. So the air leak was slow, but it was still there. We were behind schedule, but we got back to our moving days plans around noon. And there was no cost for the tire fix–thank you, Lord!

At Iron Horse RV, we did a quick hand-wash of Meriwether’s exterior. Next, we moved him to his consignment spot. I did a quick clean of the bedroom, so I could put Caspian down for a nap. Then Eric and I did a deep clean of the rest of the rig. Bathtub, dusting, wiping leather, cleaning those blasted crevices in the windows.

We finished cleaning as the sun set–around 6 p.m. Eric took some quick photos for that RV Trader listing. I locked the door, and we stood in front of Meriwether for a final selfie.

Eric held me, motioned towards Meriwether, and said, “Just think about all the places this RV has taken us.” As I looked at our home on wheels, all the memories came rushing back at once. That was the only time in this whole transition process that I got a bit choked up.

Okay, I didn’t plan on telling that whole story. But now it’s here for posterity. You want to fast forward, I’m sure.

Well, at the end of moving day, Eric made a Facebook post with the photos of our clean, lovely RV. And guess what. Remember those friends who had shown the most interest? The photos sparked their interest again. I was messaging with Sandy at 1 a.m. on Sunday, both of us excited but trying not to get ahead of ourselves.

On Monday, they went to tour Meriwether. On Tuesday, they told us they wanted to buy him. On Wednesday, we had a phone call to discuss details. By Thursday, I was drafting a bill of sale.

This has seriously been the smoothest large asset buying/selling process of my life. Our friends have been so easy to work with, and it seems like everything that works best for us also works best for them.

Today marks one week since we moved out of Meriwether. And today, we drove Meriwether to his new home and delivered him to his new family. The best part is, his new family is part of our extended family. So we know we’ll see him again.

Thank you to everyone for your words of encouragement, prayers, and just for caring about our story and journey. While Meriwether is no longer part of our journey, we have many miles laid out in front of us. We’re ready for this next chapter, and hope you’ll see us through it.

We cross the border into Mexico on Friday and will be there for two+ months!