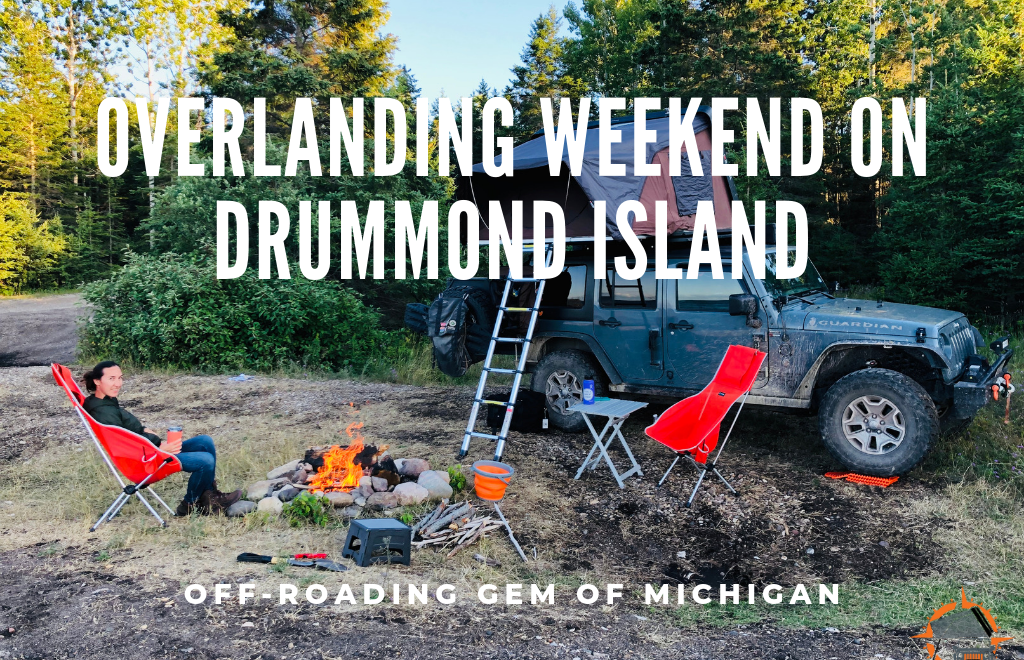 There is no place in Michigan to go off-roading like Drummond Island. We spent a weekend exploring the trails out there and want to share some protips for those of you interested in visiting.

And if the Upper Peninsula is one of the best travel destinations in the world, then Drummond Island is the crown jewel when it comes to off-road adventure.

Though the island has a permanent population of just over 1,000 people as of the latest census, over 300,000 people visit each year. Many for the off-road adventures that await them there.

Drummond Island boasts 129.8-square-miles of land goodness, 40 miles of off-road vehicle trails, and 60 miles of ATV trails. Plus, it’s home to the largest closed loop ORV system in the state.

Getting to Drummond Island

To access Drummond Island, simply head as far east as you can go on the Upper Peninsula of Michigan to a little town called DeTour Village. DeTour Village is a delightful little town which was incorporated in 1899. It boasts shops, outdoor activities, and tons of annual festivals. (Learn more about DeTour Village on its official website here.)

The ferry, which operates between DeTour Village and Drummond Island, operates year-round and is quite busy. They sell 100,000+ round-trip vehicle tickets per year, and each ferry only holds 36 vehicles! So to say that Drummond Island is well-visited island would be an understatement.

But don’t worry, as long as you aren’t going on a wheeling event weekend, you shouldn’t have any trouble getting on the island. There are no advanced ticket sales. The ferry schedule is published here, but know they’ll often run even more frequently than this, when needed.

The cost of the Drummond Island Ferry (as of August 2019) is $16 for a round-trip ticket. They only take cash. Don’t worry about buying a ticket, though. Just get in the ferry line (which can wrap around the corner in DeTour Village). Once onboard, the deckhands will pass by each vehicle and collect the fee.

Once You’re on Drummond Island

Okay, so now you’re on the island and ready to get wheeling. There are a few things you should still do if you haven’t already.

Your first stop should be Johnson’s Sport Shop, located at 29129 E. Channel Road. Here you can pick up a $3 map of the island’s off-road trails, which also shows areas where you can camp legally.

Also, if you don’t have them already, make sure you pick up your Michigan State ORV license and ORV trail permit. You’ll need both. The good news is you can purchase them right at Johnson’s Sport Shop. However, know they only take cash for these licenses and permits. As of August 2019, the fees for these two documents is $36.25. For more information on the State permits you’ll need, click here.

You’ll also need a free camping permit for each location you’re camping in, even if you are wild camping. It’s a Michigan thing. Don’t worry, the folks at Johnson’s will explain how these permits work, including how they must be posted publicly at your campsite before you even set up.

Next, know you’ll soon be leaving the most commercial area of Drummond Island, so stop and get any groceries, supplies, and fuel you might want for your adventure, before you leave this area.

If you’re hungry, just up the road from Johnson’s Sport Shop is a fun little restaurant named Esther’s Authentic Mexican Cuisine. We had the privilege of meeting the sweetheart of a woman who this restaurant is named after, and enjoyed a nice meal. It was the perfect way to start our weekend.

So now you’ve got full bellies, all your supplies, your map, and your ORV license and permit, plus you’re fueled up and ready to hit the trails.

The island is your oyster. There are so many options for you to explore: 40 miles for full-sized vehicles and 60 miles for ATVs. My recommendation is to just take a look at the map, talk to some locals, and head out on an adventure.

There are no bad trails on Drummond Island and “most” of the full-sized vehicle trails can be run in a stock 4×4. Just be aware of the weather conditions. Rain and snow can change a relatively simple trail to a much more challenging one. Make sure you wheel with a buddy, and have the appropriate recovery gear and tools for your vehicle.

We can only really speak about the trails we ran. So we’ll cover that in the next section. Based on the advice of the fine folks at Johnson’s Sport Shop, we decided to make two locations a priority for our weekend visit:

Friday: Start of Our Overlanding Trip on Drummond Island

We arrived on a Friday afternoon. After a short wait, we headed across on the ferry and stopped at Johnson’s to pick up our map and permits. We then headed to Esther’s for a good meal.

It was late afternoon, so what we really wanted to do was find a place to camp for the night. Johnson’s suggested we head towards Glen Cove, so we did. However, when we arrived at Glen Cove, it was more of a vehicle turnaround with a fire ring–and no view. It wasn’t what we had in mind.

We were really hoping for a place with a view of the water. So we looked at our map and headed off on another trail. We didn’t realize it at first, but we had already begun South Marble Head Loop. We nervously laughed with one another because we weren’t sure whether we’d find any camping area along this route.

But because we were deep in the tree-lined trail and had no idea what lay ahead of us, we just kept going. We spotted one tiny little spot we could have made work for the night, but were still hopeful we’d find something better. So we kept going up South Marble Head Loop trail. Which was getting rougher.

We had gone through a small rock garden and around a bend when we were greeted with this:

We were blown away by our find. An epic view of Lake Huron and a fire pit!

We enjoyed a roaring fire, some good conversation, and a solid night’s rest.

Saturday morning our friend Kacy (a member of Coast Guard Jeep Club) and his friend Brian (also a Coastguardsman) caught up with us. They wanted to wheel the Jeep Badge of Honor trail, so we had invited them to meet up with us and tag along.

The Jeep Badge of Honor trail was a blast. I’ll cover it in another article here on the site very soon. But the short version is this: any stock 4×4 should be able to make it to the steps near the end of the trail. To complete the trail, you have to do the steps.

The steps present a challenging obstacle depending on the line you select. I don’t recommend you try them without at minimum one other vehicle and appropriate recovery equipment. Also, keep in mind that if you go down the steps, you have to make it back up. So use your best judgement when you get there.

After South Marble Head Loop Trail, we headed out to Fossil Ledges. This was a wonderful place to refresh after the heat of our trail riding day. It was an easy off-road trail that led out to the Fossil Ledges, and any 4×4 should be able to make it in good conditions. If it has been raining, know some of the puddles may be a little deeper than you think. So take your time.

Once out there, though, you’re rewarded with a short walk down to the water where you can literally walk on the Fossil Ledges of Port Huron. It is amazing and makes for a great photo op.

After some time wading about the Fossil Ledges, we headed to Pins, a restaurant on the island, for dinner. We said goodbye to our friends, who were heading back to the mainland, and talked about our day.

After dinner, it was time for us to find another camping spot.

We wanted to go back to the epic spot we found on Friday, but it was all the way on the other side of the island, and about a third of the way up South Marble Head Loop. The sun was going to be setting before then, and we didn’t want to be that far from the ferry terminal as we had a lot of miles ahead of us on Sunday.

So we opted for a spot we found off E. Nevenens Road, an off-road logging trail that heads into the interior of the island. We found an open spot large enough to host several vehicles, but there was nobody there. We set up our tent and called it a night.

Sunday: Thanks for the Memories, Drummond Island

Sunday morning was nice. We woke up to the silence of the forest and the fresh air of the island. We took our time making coffee, having a little breakfast, watching Caspian play, and packing up.

We would have liked to have spent more time exploring the rest of Drummond Island, but we knew what we had to accomplish before the start of another work week.

So after packing up, we enjoyed the trail on the way out, and eventually found pavement again.

We aired up our tires while waiting in line for the Drummond Island ferry, and boarded with a one-ferry wait. The one-mile ferry trip was a nice time to reminisce about what we had just experienced.

We can’t recommend highly enough that you make this trip. Though we’ve only ever been to Drummond Island once, we’d like to go again.

I can’t imagine what the island is like during heavy rain or snow. I’m sure it is a completely different and far more challenging beast to conquer.

Though you can do some of the Drummond Island trails in a day, we recommend you devote at least a couple of days. We felt like we barely scratched the surface of what the island had to offer, and we look forward to returning someday–maybe under different weather conditions to have a completely new experience.

Hope you’ve enjoyed this article. If you have been to Drummond Island and have tips you’d like to include, then feel free to drop them in the comments. If this article has inspired you to visit this wonderful place, let me know in the comments, as well. We’d love to hear from you.