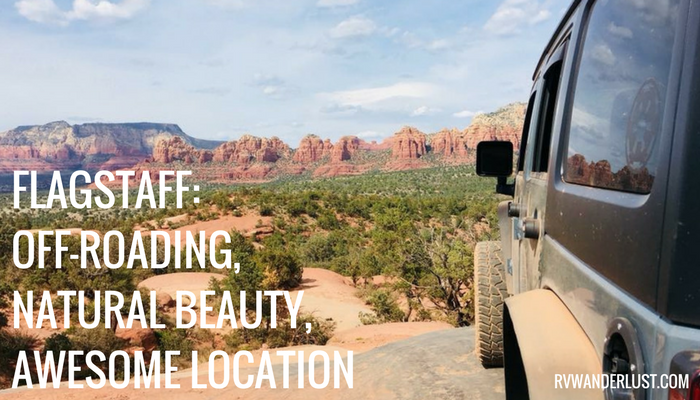 I was mad at Flagstaff, Arizona, last time we were there. We only went because our first attempt at wild camping had failed miserably. As far as I was concerned, Flagstaff was an inferior Plan B to the grandeur of Sedona.

But time was kind to my memories of Flagstaff, and Eric never had a grudge like I did. So when it came time to plan our route for 2018, I gave Flagstaff another shot.

Good thing I did. Because after our two-week visit, I kinda think Flagstaff has made my Top 5 list of places we’ve stayed in four+ years of fulltime RVing.

The day we arrived in Flagstaff, our three older boys flew in for Spring Break. Eric drove to Phoenix to pick up Darius (20), Javen (17), and Silas (14).
➡ Read about our last visit: Spontaneous Stopover in Flagstaff, AZ

Note: This article includes an affiliate link. If you get excited about any of the products featured here, we’d love it if you’d shop via our links. This will encourage us to continue investing time in creating useful content!

Things to Do in Flagstaff

Last time we were here, we didn’t have a Jeep Rubicon. Our newfound ability to go off-roading on some of the most amazing trails in the country has totally amplified our appreciation for Flagstaff.

Located between Flagstaff and Sedona, Schnebly Hill Road is the only Jeep Badge of Honor Trail in the whole state of Arizona. If you’re not familiar with the Badge of Honor program, Eric has written all about it on Jeepsies, his Jeep blog.

I didn’t get to do Schnebly Hill because our three older boys were visiting for Spring Break and there weren’t enough seat belts. But the photos I saw afterwards showed beautiful views of Arizona. You can drive the 12-mile trail in either direction. Eric recommends east to west, into Sedona. That way, the scenic climax happens at the end, not the beginning.

Broken Arrow Trail in Sedona is the ultimate experience for off-roaders. We were fortunate to have an experienced guide in our friend Jerry, who lives in the area. Jerry is co-founder of The Jeep Mafia, a national Jeep club, as well as a volunteer for the U.S. Forest Service.

Without question, Broken Arrow is my favorite Jeep trail I’ve ever done; my favorite activity in the Flagstaff area; and one of the most beautiful places I’ve ever seen in my life. That’s a lot of superlatives, but I mean every one of them.

One afternoon, Eric started to drive around Cinder Hill OHV Area, just outside Flagstaff. But when he realized how much I’d like it, he stopped so we could go back together. (He took Forest Roads 545 and 546 around Sunset Crater, which ended up being quite technical.)

Cinder Hills is all volcanic ash. It’s what I imagine it would be like to drive on Mars. For the most part, the whole area is fair game and you can drive just about anywhere you want.

We ended up going to the top of some hills, where we had incredible views of the area. We even stumbled on a giant crater.

We went back to Sunset Crater Volcano National Monument, so we could take the kids on the one-mile Lava Flow Trail. You can read all about it in our previous Flagstaff article. We didn’t go back to Wupatki National Monument this time, but we have a review and photos in that article, as well.

Towards the end of our first week in Flagstaff, our daughter Arianna (19) drove in from California with her boyfriend, Javi. Arianna is a college freshman and has a job, so she couldn’t come for the whole week. But we were grateful to have all our kids together, even for a little while. Moms, you might relate to that feeling of having all your chicks safe in the nest. <3

We wanted to do something memorable with our short time all together. Javi had never seen the Grand Canyon, and it had been a decade since the rest of us were there, so we took a half-day trip to the South Rim.

We arrived around lunch time, and went straight for the South Rim Visitor’s Center and the obligatory photo at Mather’s Point. I didn’t let any of the kids look at the Grand Canyon until we got to Mather’s Point because it’s an unforgettable first viewpoint.

Once we had enough photos of Caspian’s hangry face, we walked a short way down the Rim Trail until we found an open bench. Then we broke out our picnic lunch of sandwiches, watermelon, and chips. The native squirrels were quite bold!

After taking the stroller and our extra bags back to the Jeep, we caught the orange shuttle to South Kaibab Trail. Caspian in my Lillebaby carrier, we hiked 0.8 miles into the Grand Canyon to Ooh Aah Point.

The initial descent below the rim is composed of nine switchbacks. Don’t forget you have to climb back up! Actually, the second half can be more taxing because it’s typically in direct sunlight. Just pace yourself; make sure you have enough water; and remember to appreciate your surroundings.

Ooh Aah Point is aptly named, a breathtaking spot to sit and reflect for a while. The South Kaibab Trail does continue down, if you’re looking for a longer hike.

By the time we were back at the rim, my teenagers were asking whether they could nap in the Jeep. ? After taking the shuttle back to the visitor’s center, we drove the 23 miles to Desert View and the watchtower there. We didn’t know the stairway to the top of the watchtower closed at 5:30 p.m. Fortunately, we made it just in time, with a few minutes to soak in one last look at the Grand Canyon.

I heard really good things about Tusayan Ruins and Museum, which is close to Desert View. But there wasn’t quite enough energy to go around, so we left it for next time. We drove back to Flagstaff for a quick dinner, before getting home to put baby in bed.

Even though we were only there for a half day, I’m glad we went to the Grand Canyon. We didn’t stress about stuffing things in, and just enjoyed where we were at.

Things to Eat in Flagstaff Mama Burger was our big find, and I’m embarrassed to admit how many times we went there in two weeks. But I found possibly my favorite burger ever. It’s called the Kahuna, and it has pineapple, teriyaki sauce, bell pepper, mayo, and cheese (menu says Swiss, but substitute cheddar). This is a twist on the traditional Hawaiian burger. I’m telling you, that bell pepper is pure magic. The tater tots are also a must. I hear good things about the shakes, and they have all kinds of creative flavors.

If we hadn’t found El Tapatio just a couple days before leaving Flagstaff, I’d probably have to be embarrassed about how many times we went there, too. Solid house margarita and amazing molcajete with pork, chicken, and shrimp. Like his momma, Caspian is all about bell pepper. So we were both happy.

Eric likes hot wings and endorses Lumberyard Brewing Co. The wings here have a dry rub and are served crispy. You get your choice of dipping sauce, and can choose a traditional Buffalo sauce. Eric liked the regular Buffalo sauce more than the hot.
5 S. San Francisco St. – Website

Macy’s was my jam, one of the places that made me love Flagstaff a little bit more. The Cafe Bohemian was my favorite drink, a cappuccino topped with chocolate and cinnamon. I also tried the Cafe Viennese, with cinnamon, clove, and allspice.

In addition to a full menu, Macy’s has a packed pastry case. I tried the cream cheese coffee cake and an orange chocolate chip muffin, but my favorite item was the chocolate croissant.

We went back to Toasted Owl Cafe, Steep Leaf, and Ewa’s Thai Cuisine. Ewa’s stopped serving a lunch buffet around New Year’s, but you can still order the cream cheese wontons. ?

Our RV Campground in Flagstaff

Because we were going to be having 3-5 extra teenagers/young adults with us, I really felt like we needed full hookups. I wanted to stay at Greer’s Pine Shadows RV Park, but they’re on some kind of old septic system and have all kinds of restrictions because of it.

With trepidation, we booked again at Luke Air Force Base’s Famcamp, Fort Tuthill. I was apprehensive for three reasons:

No water. No sewer. Eight people.

(In all fairness, Arianna and Javi got a hotel room, so they weren’t staying with us fulltime. But that takes away from the drama of this story.)

People, I am so proud to tell you that we made it eight days before having to move the RV. I still can’t believe it. When we did move, it wasn’t even because we had to dump. Our black and grey tanks still weren’t full. It was because we ran out of water. We could’ve gone even longer by purchasing bottled water, which I didn’t do because I didn’t think we would make it more than a few days before having to dump.

I am learning so much about our dry camping capabilities on this 2018 trip, and I’m super excited about the results and what they mean for our travel future. But I’ll save all that for another article.

Bottom line: I love Fort Tuthill. We stayed in site #40 again, avoiding the dangerous drive through the pine trees that we did last time. Caspian has been walking for a little more than a month, and this was the first campground where the weather was nice enough for him to toddle around outside. When I look back on his babyhood, I think I’ll have snapshot memories of him under the pine trees in Flagstaff, playing with his bulldozer and little red truck.

The night before we checked into Fort Tuthill, we dry camped off Route 66 at the beginning of Forest Road 791. Big thank you to our friends at @lifewithdyna for posting pics on Campendium. While I wouldn’t stay here for two weeks, it was perfect for one night. (Having said that, I am partial to train noise and maybe you’re not.)

Eric even ventured up the forest road for some night-wheeling.

We absolutely loved the teaching and congregation at Mountain View Church, where we went on Easter Sunday and the week after. Randy’s Downtown Garage took really good care of our Jeep, getting some important maintenance completed.

And then there were the sweet friends who took the time to see us on their way through town. We had Brooke and Buddy Baum (@trailingaway) over for a grill-out and wine time. And we got to see Jon and Nadia Bajuelo (Roaming Remodelers) for the third time in a month. We love our tribe.

We left Flagstaff a day early, so we could wild camp at Lake Powell. RV life is so good.