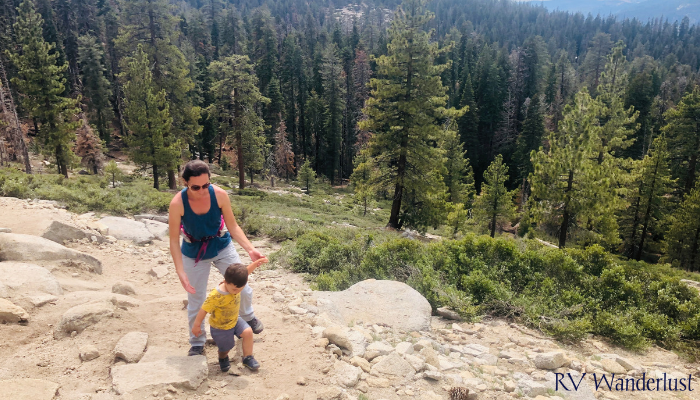 We recently spent a week wild camping a few miles outside the border of Yosemite National Park in California. We spent one full Sunday in the park, then visited two other times for more hiking.

Within five days, toddler Caspian hiked six miles unaided. Each of these three two-mile hikes were memorable, with varying scenery and levels of difficulty.

I love the two-mile chunk, when it comes to hiking. Yes, it’s something Caspian can manage on his own now. But it’s also a distance we can usually fit in after work, or during a packed Saturday of sight-seeing.

If two miles sounds good to you, too, then read on. Here’s are the three unforgettable two-mile hikes we did at Yosemite National Park.

Our hike to Vernal Fall Footbridge fell in the middle of a spectacular full day in Yosemite National Park. After visiting Glacier Point and Tunnel View, and being soaked at the foot of Bridalveil Fall, we parked at Yosemite Village and caught the shuttle.

Stop #16 is Mist Trail, which YosemiteHikes.com names, “Yosemite’s signature hike.” The trail takes you to Vernal Fall and on to Nevada Fall (7 mi. roundtrip). But with our two-year-old on foot, the Vernal Fall footbridge was as far as we were going to go (2 mi. roundtrip).

We enjoyed our first hike in Yosemite. As the early summer heat hit in the afternoon, we were relieved that the trail was heavily shaded. Below us, the Merced River rushed with audible snow melt.

And then there was the elevation gain. While the trail is flat and paved, the route to the footbridge is largely uphill. Steep hills. That was the only downside to this hike: the elevation gain wasn’t subtle at all.

If you have bad knees like Eric, definitely take your trekking poles for the downhill route back.

Type: Out and back
Length: 2.1 mi.
Difficulty: Easy to moderate
Elevation gain: 456 ft.
Shade: Most not shaded

I’ll never forget our hike to Sentinel Dome, which is located off the road to Glacier Point. The sandy dirt trail was mostly easy, with a patch of rocks we had to pick our way through. Though we were hiking uphill, the elevation gain wasn’t nearly as noticeable as it was on the Vernal Fall footbridge trail.

This hike was recommended by one of our Instagram followers, but I didn’t know what to expect. As we came around the back side of Sentinel Dome, through a grove of trees, the world opened up. Suddenly, we were on a precipice with a tremendous view of Yosemite National Park, including the plunging Yosemite Falls.

There was snow on the dome, so Caspian threw a few snowballs and Eric made a tiny snowman. When he asked Caspian what the snowman’s name was, Caspian said it was Neil.

I didn’t want to leave. The panorama was one of the most beautiful things I’ve ever seen.

From where we camped in Sierra National Forest on the south end of the park, Mariposa Grove of the Sequoias was only 20 minutes from us. I loved visiting Sequoia National Park in 2016, so I didn’t want to miss an opportunity to see these magnificent trees in a different setting.

This was our easiest hike of the three. Though the Internet claims the elevation gain is 351-feet, I never would’ve guessed that. For the most part (other than a few easy switchbacks at the end of the loop), the trail seemed fairly flat.

Since we weren’t looking at our feet, we could leisurely marvel at the giant sequoias surrounding us. It’s amazing how they dwarf the other tree species around them.

Caspian loved the “tunnel trees” and insisted on going into each one. As he rounded out mile six of six in one week, my momma heart was bursting. I’m so proud of him.