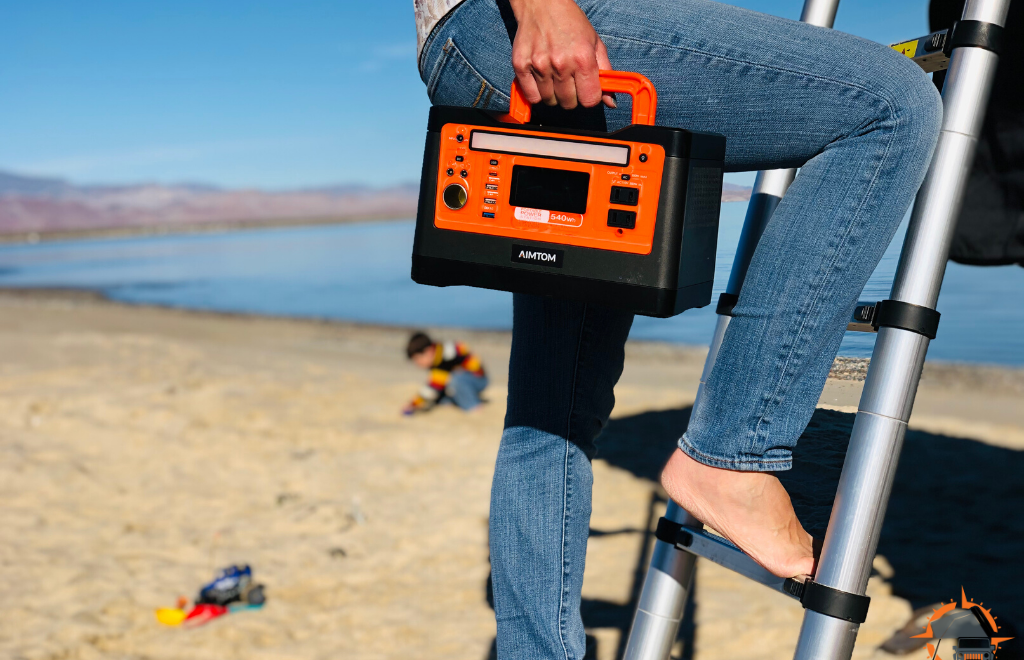 A portable power station had been on my wish list for our overlanding adventures, and I’d been leaning toward the Goal Zero Yeti 400 Lithium. As a matter of fact, it was on my 2019 Christmas wish list.

But last fall, just before the holiday shopping season, a representative from AimTom reached out to us via social media. He offered to send us an AimTom 540Wh Portable Power Station, also known as the PowerPal Raptor, in exchange for a transparent review.

Here’s where the story gets interesting. Initially I told him, “Thank you, but no.” Like any good rep, he didn’t take my first no. Instead, he asked me, “Why not?”

I explained I’d done a significant amount of research and had already decided on Goal Zero’s Yeti 400 Lithium. Without hesitating, he said, “What if I told you our unit is lighter, has more power, and more ports?”

Obviously, those claims caught my attention.

Interested, but still skeptical, I made it clear that–if I accepted the unit–I wouldn’t be writing my review until I’d used the unit for at least six months in the field. Also, when I did write my review, it would be transparent and I wouldn’t sugarcoat exactly what I thought.

He said he wouldn’t expect anything less, and asked for our shipping address.

Note: This article includes affiliate links. If you get excited about any the product featured here, I’d love it if you’d shop via my links. This encourages me to continue investing time in creating useful reviews and content.

The first thing we noticed when the unit arrived was, on the surface, the AimTom 540Wh Portable Power Station was exactly what our contact at AimTom had described. It was significantly lighter than any true competitor I’d physically lifted and had noticeably more power port options.

The AimTom Portable Power Station boasts the ability to power up to nine devices at the same time.

Included in the port options are:

In addition to the unit’s light weight and numerous ports, the AimTom 540Wh Portable Power Station had a nicely sized LCD information panel, LED light bar on the unit itself, tuck-away carrying handle, and rubber pads on the bottom of the unit to keep it from moving around when put down.

All in all, the AimTom 540Wh Portable Power Station looked like a dream machine. But the question remained, how would it perform in the field overlanding with us for six months straight?

After over six months of full-time travel in our Jeep throughout the U.S. and Mexico, we’re pleased to report the AimTom 540Wh Portable Power Station has performed flawlessly.

(Sidenote: there are several adjustments to the unit we wish AimTom would make, but these are not performance-related. I’ll cover them in the next section.)

Simply put, the AimTom 540Wh Portable Power Station has been a game changer for us. We charge our devices constantly and have NEVER been able to bring the unit down to a zero charge. We’ve gone three full days without charging the unit and had enough juice left to run our devices for a couple more days, at least.

Charging the AimTom 540Wh Portable Power Station itself is simple. Since we drive to a new location almost daily, I simply plug it into a 12V outlet in our Jeep whenever we’re on the move to charge it back up. But you have other options. You can charge it via an AC plug or even via solar. AimTom made this unit incredibly user-friendly.

Another nice feature is that the unit is quiet enough during daytime operation to allow us to enjoy our outdoor surroundings without any significant humming noise.

And compared to its competitors, the AimTom is so lightweight we’ve taken it with us on short walks to beautiful vistas to work from. We’ve even taken it to large events where we’re speaking and allowed others to charge their devices on it. Simply put, the AimTom 540Wh Portable Power Station just doesn’t quit.

Alright, so now you know we love this little unit. But there are a few things we don’t like and think AimTom should address in future iterations.

There are a few things we don’t like about the AimTom 540Wh Portable Power Station. This wouldn’t be a transparent review if we didn’t share those things with you. But let me preface this section by saying we love our unit and are glad we got it over the competing options.

Though the AimTom 540Wh Portable Power Station has nine ports to choose from, fitting these ports on such a small box has its challenges. While I’m no engineer, I can tell you the spacing between the AC ports leaves something to be desired for the end user.

In my experience, the ports are too close together to have two devices plugged in at the same time. We could carry a surge protector and plug that into the unit, but that’s one more thing to carry.

This is my chief complaint with this portable power station. Having said that, we do carry a surge protector, so it isn’t that big of an issue for us personally. But I’d like to see AimTom space out these ports so both plugs can be utilized at the same time.

The rubber pads at the bottom of the unit are a nice addition to keep the unit from shifting or sliding. But after just a few weeks of use, one of them fell off. The heat from being kept in our vehicle loosened the grip of the adhesive glue. This could be easily altered by adding an indented screw to keep the pads in place. Luckily, I found the pad and was able to make a quick fix with superglue.

The way the AimTom 540Wh Portable Power Station allows the user to select which bank of power they use is really nice. For example, you can turn on the AC outlets and leave all the others off.

However, every time you press a button, the unit beeps. Which is a nice thing to have during daytime operation, so you audibly know you’ve engaged the right feature. However, when you’re in a roof top tent with a sleeping wife and three-year-old, and you turn on or off one of the ports, the beep seems really loud (especially when you’re miles from anywhere and enjoying the sound of silence)

Unfortunately, there is no option to mute this feature. It would be really nice if there were. So says my wife.

Overall, we’re really happy we took a chance on AimTom. Its portable power station is exactly as described, and has performed flawlessly through hours of use and abuse over a period of six months of full-time travel.

Though there are a few things we’d love to see AimTom change in the future, nothing is a deal breaker.

We recommend this unit to any overlander or camper looking for a portable power solution. If you’re interested in purchasing the AimTom 540Wh Portable Power Station, you can do so through our Amazon link here.

AimTom has a portable solar panel that can be used to charge the AimTom 540Wh Portable Power Station. If it perfoms as well as this unit has, then it would definitely be something we’d recommend purchasing for off-grid travel. AimTom said they were going to send us one of these solar panel units to test out. When they decide to send it, we’ll let you know what our thoughts are on that unit, too.

We hope you’ve enjoyed this independent review of the AimTom 540Wh Portable Power Station. Look for other overlanding gear reviews from us in the future. And if you have any questions about this unit, then feel free to shoot us a contact form, or drop a comment below.