For a long time, Eric disregarded what was best for his health. Considering his grandfather died from diabetes and his mother has lived with it for decades, his diagnosis came as a shock without being much of a surprise.

When Eric posted the news on Facebook last summer, a long-time acquaintance from our Austin online marketing circle happened to see it. This person, Mark Lyne, was diabetic and had been considering sharing his journey through a Facebook group.

This fledgling Facebook group–and Mark’s knowledge shared through it–was the impetus for Eric’s major lifestyle change. If not for Mark, it’s possible Eric would’ve spent the rest of his life following the conventional “wisdom” regarding diabetes care, on a rollercoaster with his disease.

➡️ Keep reading: “Coping With a Medical Diagnosis on the Road”

Instead of that scenario, Eric turned up the self-discipline and ate himself out of Type II diabetes in four months.

Challenging Everything We Thought About Food

Mark Lyne is an advocate for the ketogenic diet. In short, keto is consumption of high fat, moderate protein, and very low carbohydrates. Fat, protein, and carbs are the three macronutrients we all consume.

Many of us know carbs are bad for us, at least when it comes to sugar and potato chips. But how can it be healthy to eat 65-70% fat every day? How can that be good for our cholesterol, weight, and overall health?

These are the questions we asked ourselves (and the Internet) as we formulated our response to Eric’s diabetes diagnosis. Every objection we raised, Mark could answer. It only took a couple of days for Eric to decide to give it a try. We hoped keto would lower his blood sugar level. We didn’t see how it could possibly be good for his weight, but we pushed our skepticism to the side for the time being.

The next couple of weeks were challenging. The hardest part was not knowing what Eric should eat and what he shouldn’t. Things we thought were healthy–like most fruit, whole grain crackers, and vegetables like corn–were suddenly given the red light. It was a learning process.

Downloading the MyFitnessPal app and paying for premium was a breakthrough. With it, Eric could enter any food to find its fat, protein, and carb content. There’s a barcode scanner for grocery items and a huge library of dishes at restaurants throughout the country.

When he setup the app, Eric entered a daily goal of 70% fat, 20% protein, and 10% carbs. MyFitnessPal’s pie chart of his food intake shows where he’s at throughout the day, relative to his daily goal.

A Look at the Numbers 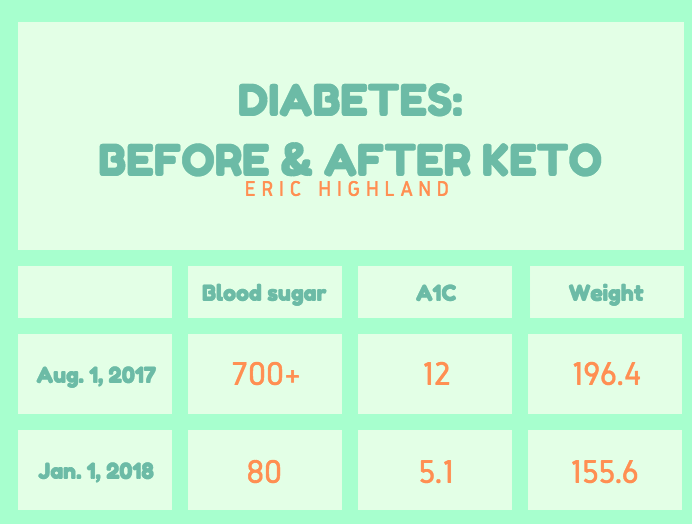 When Eric went into the emergency room on July 31, 2017, and got his diagnosis, he maxed out the blood sugar meter. We think his blood sugar was at least 700 (80-130 is considered normal, though 80-90 is ideal). His A1C measured around 12, and his weight was 196.4 pounds. He immediately started taking Metformin twice daily.

As of Jan. 1, 2018, after five months of faithfully following the keto diet, the numbers tell the story. Eric’s blood sugar is in the 70-90 range. If anything, we struggle with it being too low, rather than too high. His A1C is around 5.1, and he’s lost over 40 pounds. He no longer has to take any medication for diabetes.

Per his doctor, Eric is no longer actively diabetic. He isn’t even pre-diabetic. He literally ate himself out of Type II diabetes by radically changing his diet.

Eric’s self-discipline is through the roof. He didn’t cheat on his keto lifestyle a single time from August through November. On Dec. 3, Caspian’s first birthday, he had one bite of a cupcake.

Though Eric has eaten diabetes into remission, he is choosing to continue with the keto lifestyle indefinitely. Every once in a while, he has a traditional bun with his hamburger, instead of a lettuce wrap. But that’s about the extent of his indulgence.

Our overdue next step is to purchase a ketone meter online. Using a simple finger prick, this meter ensures Eric’s ketone level is in the safe range. Ketoacidosis, where the body produces too many ketones, is a danger we want to avoid.

We are keto ambassadors, 100% sold. We love sharing the lifestyle with friends, especially those who have been struggling with diabetes.

If you’re diabetic or curious about the keto lifestyle, here are a few resources to look into:

Important: DO NOT begin keto without consulting your doctor. We can’t stress this enough. While we and many people we know have experienced amazing results and are more healthy than we’ve ever been, everyone’s body is different.

Please don’t hesitate to leave a comment with questions. As always, we promise to be transparent. This is a topic I’m passionate about, so I might just turn your question into a full article.