Live like a local. Many travelers set this goal, but what is the best way of actually achieving it?

Our experience in San Luis Potosí has been transformed by meeting Lilia, her teenage son Ivan, and their wider circle of friends and 4×4 community. They’ve given us insight into where and where not to go, explained cultural nuances, and taken us to places we never would’ve found on our own.

I would argue that living like a local is far more than finding the right mercados and tiendas (markets and shops), or staying in the right neighborhood. One aspect we’ve struggled with during our past five years of full-time travel is finding places to volunteer–when we’re only in one place for two weeks at most.

Lilia and her Nauhales Off Road 4×4 Club enriched our lives today by inviting us into their community service–that more important aspect of living like a local.

We left the city of San Luis Potosí this morning and drove an hour to La Joya Honda. After going through the small village of Purisima, we arrived at the crater. This was the sight-seeing portion of our day together. Low-lying clouds whispered over the crater as the wind whipped our hair. Ivan practiced parkour on the abandoned cement columns, while the rest of us wondered how three small cars made it up a road we’d consider 4×4 only. (I called them the dog ladies, as they had at least 8 dogs between them.)

“Godi,” the owner of the third Jeep in our party and past-president of Nauhales, told Eric and me about the mystery surrounding the crater. He pointed out native plants–some that are smashed to make rope, and others that bloom brilliantly in March and April. Despite the cold, I was grateful for this remote place and its beauty. Meeting the People of Purisima Village in La Joya

But I have to admit I was eager to get back to the purpose of our day–delivering donated toys, blankets, and food to a community that could use them. We retraced our steps to Purisima. It was deserted, except for two small boys playing on a cement basketball court at (what seemed to be) the center of the village.

“Soldados!” the three-year-old exclaimed as he took a few steps back. He was worried we were soldiers in our big Jeeps. I think everyone was less concerned about our intentions when two-year-old Caspian burst from the constraints of his car seat, unabashedly asking to ride the boys’ wheeled toys.

It didn’t take long for word of our arrival to spread. The children appeared from every direction, along with their mothers and grandmothers. One father approached, and I ended up conversing with him most because his English was far better than my Spanish. 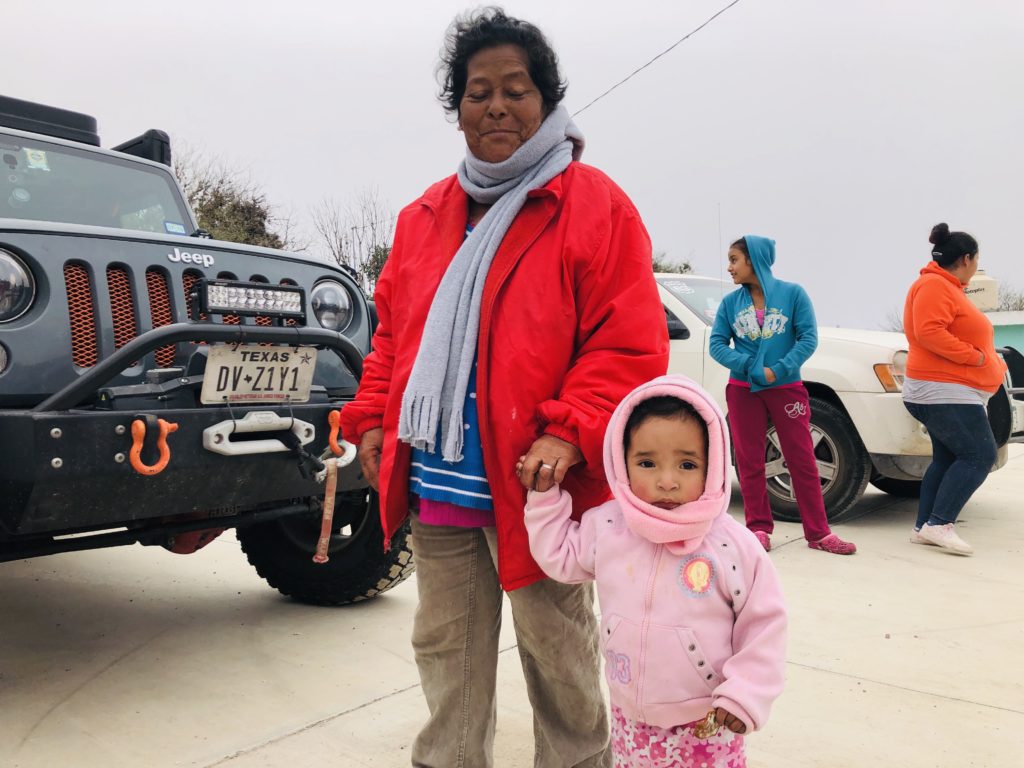 Our time on the basketball court blurred and hummed with happiness. The garbage bags filled with goodies came down from the roof of Godi’s Jeep. It felt like Christmas again, with so many stuffed animals, action figures, and candy being spread around. Eric handed out two-dollar bills, which we had purposely requested from our bank stateside.

There were two stand-out toys that had to be distributed fairly: a pink scooter and a pogo stick. I devised a simple game by laying three hula hoops on the ground. The competing children (girls for the scooter, boys for the pogo) had to run figure-8s around the hula hoops, return the same way, and tag Eric first to win.

The races were adorable. I’m not sure the boys knew exactly what to do with the pogo stick (Ivan tried to demonstrate), but I sure loved watching that little girl in the purple jacket ride her scooter.

Meanwhile, Caspian had completely absconded with the tricycle. And the tricycle owner’s dog, a long-haired Chihuahua named Tyson, was content to ride in the back of the tricycle–to Caspian’s utter delight. Every time Tyson jumped out, Caspian would chase him and (try to) carry him back to the tricycle. I think most of the town took turns pushing Caspian on that tricycle.

We received far beyond what we gave. The people of the village were so genuine and kind. The father I mentioned–his name was unusual to me so I regret I can’t remember it–kindly told me that his home is our home whenever we return. His mother brought out a bag heaping with the most delicious tamales, along with drinks, cups, and napkins. Another woman told us to come the next week, and she’d make gorditas for us.

It’s hard to believe our time in the state of San Luis Potosí is more than half over (I will write more about our time here). I’m not ready to leave, and already know this is a place we’ll return to.