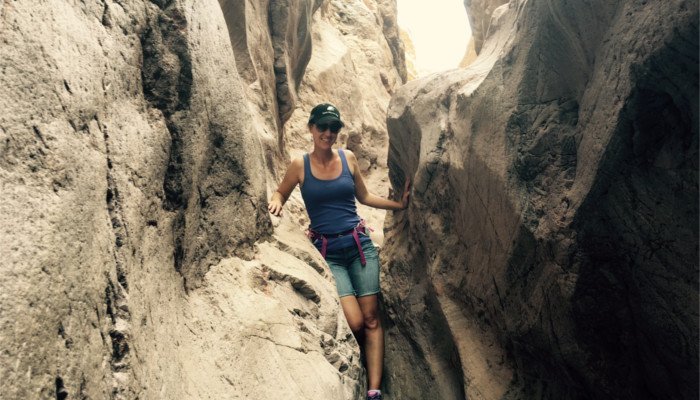 Lake Havasu City didn’t become a legal entity until 1963, and it wasn’t incorporated until 1978. I wasn’t alive yet, so I can’t be blamed. But I’m surprised no one else had the foresight to capitalize on this beautiful setting.

After a drive through Arizona desert, the sparkling blue waters of Lake Havasu appear in the valley below. From 7,000 feet of elevation in Flagstaff, we’ve descended to a mere 735 feet. Across the Colorado River, which flows into and past Lake Havasu, lies the state of California. The state line is right down the middle.

With mounds of hard sand slashed by deep four-wheeling trails, and the barren mountains in the background, this lakeside city feels like a real oasis. Locals and tourists flock to the water for every kind of marine recreational activity. We were warned about visiting during Spring Break, but we only noticed extra crowds on the Sunday of our arrival, when we wandered under the London Bridge and down Shoreline Trail.

We didn’t mind. After our obligatory London Bridge photos (the real thing), we meandered along the beautiful inlet and laughed at college kid antics. We also capitalized on the vendors giving out freebies (Monster energy drinks and Jack Link’s jerky sound like lunch to me).

We took it easy during the week. We stumbled on the Lake Havasu Sunday Swap Meet, which runs from 7:30 a.m. to 2:30 p.m. We were able to get Eric a United States Coast Guard Retired cap, and we also took advantage of the fruit and vegetable stand. We stocked up on asparagus, green onions, bell pepper, cucumbers and jicama for only $8. Everything was good quality and tasty.

On Monday night, we checked out Scoops with Mike and Kathie of Life Rebooted. All the ice cream is homemade and very creamy. Both Eric and I ordered Maple Walnut because it’s one of our favorites, and we don’t usually see it in the southern United States. We even convinced Kathie to try it for the first time!

Squeezing in Between Mountains

Our big activity for the week was hiking Crack in the Mountain Trail at Sara Park. AllTrails calls it Sara Canyon Trail. It’s about five miles in and out, but there are offshoots you can take if you want to do more exploring, or get a view from a higher elevation.

We took the Yellow trail, which ended at the cold and refreshing Colorado River. It was awesome to take off our shoes and soak our feet for a while. But what makes this trail exceptional is the reason for its name, Crack in the Mountain. You literally scramble and shimmy through the crack between two mountains of rock. At one point, you even have to slide down a large boulder to follow the trail (they’ve added a rock and makeshift ladder to help).

We took the Green/Blue trail on our return, which feeds back into the Yellow trail at mile marker 1.8. We found the convention and visitor’s bureau web page on this trail to be very helpful.

Since it is Spring Break time, and this is a popular area any time of the year, we had a difficult time finding an RV spot. Lake Havasu State Park, which is closer to the city, was full. We were able to get six nights at Cattail Cove State Park (about 20 minutes south of city center) by reserving about two months out.

But once we arrived at Cattail Cove, we were delighted with our choice. This state park is absolutely beautiful. The RV site area ends at a clean, large, sandy beach. Access for swimming, kayaking or boating is right there, with covered picnic tables available. There are also regular ranger programs, including morning nature walks and evening programs at the amphitheater. Our neighbors have been really nice, too. One couple gave us a tour of their Allegro Open Road approximately three minutes after we met them for the first time!

Stop at the Shop

On our last day in town, we took Meriwether into Challenger Automotive Marine & RV (781 N. Lake Havasu Ave. #3) to get the generator looked at. More on that in an upcoming article.

I couldn’t believe a place this beautiful existed, and I immediately planned to visit by working it into our itinerary.

There’s only one problem. This isn’t Lake Havasu. This is Havasu Falls. It wasn’t until months after I originally found this pin that I figured out the difference, realized this photo had been captioned wrong, and discovered how many people confuse the two.

Havasu Falls, also known as Havusupai Falls, is located near the Grand Canyon. It can only be reached by a 10-mile hike, one way. Because of it’s seclusion, an overnight stay is pretty much mandatory. There’s even a lodge near the falls, if you don’t want to tent camp.

All this is great, but I was incredibly disappointing when I found out. I didn’t even want to go to Lake Havasu City anymore because it wasn’t what I had pictured in my mind (or seen on Pinterest).

Not sure what the lesson learned is, other than “don’t believe everything you see on the Internet.” Lake Havasu City, you’ve been good to this Pinteresting gal. Havasu Falls, I’ll see you yet.