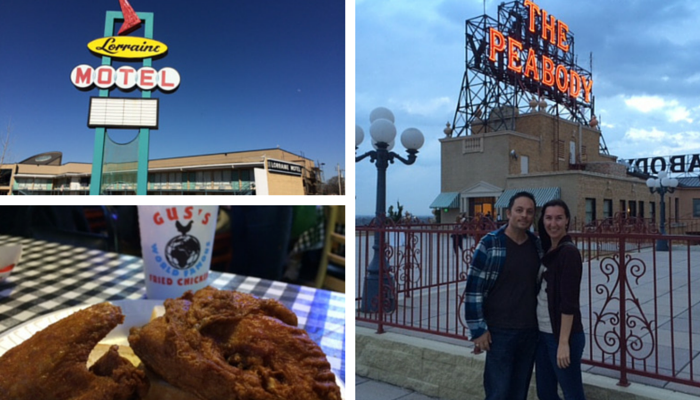 We had a week-long stopover in Memphis, TN from March 28-April 3rd as we made our way northeast to Kentucky. I had only ever driven through Memphis and it never left a good taste in my mouth. I remember being appalled when I first found out how much it costs to visit Graceland. I decided to visit in my imagination instead.

But our week stay this spring erased the bad taste in my mouth, replacing it with craft cocktails and amazing fried chicken. Apart from the foodie pleasures, the historical worth of the city of Memphis is heavy. I’m glad we had a chance to appreciate it.

Without further adieu (and because I’m almost two months behind), behold! 8 of our best memories of Memphis, TN.

If it’s time for Sunday brunch in Memphis, I highly recommended South of Beale. Online reviews convinced us to try it, and we weren’t disappointed.

We found free street parking and stepped inside the modern, clean interior. As soon as we were seated, a bowl of housemade kettle corn came out to us. What a memorable treat!

For our meals, I had a phenomenal grilled salmon salad that was seriously one of the best salads I’ve ever had. Eric had a burger he enjoyed (I think he wished he had ordered the salad!). I also had a craft cocktail – there were many creative and affordable choices.

We were within walking distance of our next stop, the National Civil Rights Museum, which is open from 12-5 PM on Sundays.

The National Civil Rights Museum is co-located with the Lorraine Motel, where Martin Luther King Jr. was assassinated in 1968. From the towering sculpture in the atrium to the last moments in front of MLK’s hotel room, the museum is incredibly well done. A $27.5 million renovation was just last year, making this the most modern museum I’ve visited recently. Multimedia displays such as wall-sized touch screens and dozens of audio interviews bring the civil rights topics alive and plant places, faces and names in visitors’ memories.

We spent three hours at the museum and could’ve been there longer. Without a doubt, this stop belongs on any Memphis itinerary. No trip to Memphis would be complete without a stroll down Beale Street. We walked by at least four venues playing live music and stopped to browse at a record store. I can’t say it quite compared to the extent and/or vibe of New Orleans or Austin. To me, it felt overly commercialized/touristy. But maybe I missed the back alley spot where all the locals go!

#4 The Terrace at River Inn

I have this thing for the Mississippi River. It sings to me a refrain of the American spirit, of natural strength, of discovery and trade, of Mark Twain stories, and of the way my high school English teacher would always say that places and geographical elements could be characters in a story. Every time I cross it, I sing “Old Man River” at the top of my lungs.

So when I found out about a rooftop bar in Memphis that offered the best view of the Mississippi in the whole city, I was so there. Located in charming Harbortown on the top of River Inn, The Terrace was everything I hoped for.

The sun flooded the open air patio while the river sparkled its finest before the fall of dusk. I ordered the Juniper Fusion (Hendricks, homemade citrus agave blend, dash of orange Bitters, muddled cucumbers and strawberries) off the extensive cocktail menu and enjoyed my husband’s company.

As we stepped out of the elevator downstairs, piano music flooded the room. We sat and listed to Laura, an 80s-something musician whose fingers were never so alive. She was precious and played that “Old Man River” for me, following it up with a brilliant version of Joplin’s “The Entertainer.”

Laura also plays at the Peabody – I believe she said Monday and Saturday evenings.

This is why I travel – to meet amazing people like Laura. Her rendition of “Old Man River” brought me to tears. Here she is playing “The Entertainer.”

Now found all over the country, Gus’s World Famous Fried Chicken began in a modest, one-room building in downtown Memphis. We skipped the sides and saved all our room for that delicious chicken. We recommend the breast pieces with the fabulous sweet tea. Pecan pie a la mode was recommended, but disappointingly they were out of ice cream when we visited.

I would be lying if I said I hadn’t thought of Gus’s many times since we were in Memphis!

Among the many hyped and recommended spots in Memphis that we tried, Charlie Vergos’ Rendezvous was the biggest disappointment. We tried the ribs and they were good, but we’ve had better for the price. I was tremendously bummed by the pulled pork nachos, after having crazy fabulous, fantasy-worthy pulled pork nachos at The Raleigh Times. Charlie Vergos’ nachos were composed of (what seemed like) grocery store bought round corn tortilla chips and Velveeta. Eesh!

I guess we’re just spoiled by Texas BBQ. But people love this place, so you may not want to take our word for it. Try for yourself!

We had to make our way to the iconic Peabody Hotel. We relaxed at a table right next to the duck fountain and I tried a cocktail I would order again and a dessert that I wouldn’t. We were a little late for the ducks (they go home at 5 PM), so we made our way upstairs to the Skyway. The rooftop offered a beautiful view of the city (there’s a rooftop bar as well), and we peeked around the corner to see the Duck Palace.

Duck inside a high-end hotel in the middle of a city…so much fun.

One of Eric’s Memphis must-tastes was Dyer’s on Beale. This place has been around since 1912. With diner decor and simple burgers that comfort the palate,  the only downer was the sudden cold front that brought the Arctic tundra in every time someone opened the door. (Winter stayed around an awfully long time this year, yes?)

Eric had the triple and wants me to add that it was the “bomb diggity.” From a guy who loves burgers, that’s quite a generous review.

What say you? What are your favorite stops in Memphis and your most cherished memories of time spent there? I’d love to know. It’s never too early to plan the next trip!