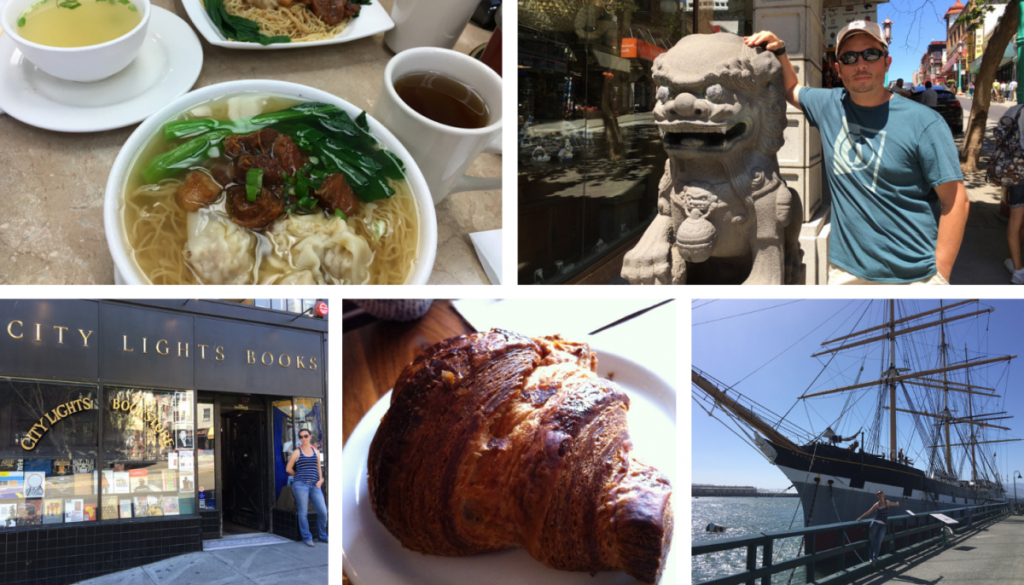 I had never been to San Francisco, save for a swing through during a family vacation in high school, which involved a foggy drive across the Golden Gate Bridge and a late-night ride on a trolley car. Not quite the full experience. Eric had spent some time in the city a number of years ago, but his expertise was mostly the nightlife scene (as sailors go). Again, not quite the full experience.

So once we were set up at the military campground at TRACEN Petaluma (highly recommended, for those of you with access), we decided to spend the next day in San Francisco. One day there, and we’d both rank it among our favorite big cities.

Pro tip: We didn’t do it purposefully, but our Sunday visit ended up being awesome for the pocketbook. Street parking is free on Sundays, with the exception of particular neighborhoods. The only place we had to pay was Fisherman’s Wharf.

Things We Did in San Francisco

Golden Gate Park reminded us of Forest Park in St. Louis. It’s the third most-visited park in the United States, filled with water features, natural beauty, wildlife and opportunities for outdoor activity. Like Forest Park, it’s home to museums like the California Academy of Sciences with its Golden Gate Park Aquarium.

But we weren’t there to see any of that. Instead, we made a beeline for Golden Gate Bison Paddock. Would you believe that the very first bison male and female arrived at Golden Gate Park in 1890? While the current residents are descendants of 1984 arrivals, bison have been at this park since that first pair in 1890. With a fair amount of space to roam and graze, our national mammal seemed pretty happy.

On the southeast corner of Golden Gate Park, the Haight-Ashbury neighborhood still pays homage to flower power. We enjoyed strolling down Haight Street and absorbing the counter-cultural atmosphere. We found some really cool shops, from steampunk to used DVDs.

It was time to get to lunch in Chinatown, so we cut our stroll short, but next time we’ll get to Alamo Square to see the Painted Ladies.

On top of Nob Hill, Lombard Street is known as the World’s Crookedest Street. If you haven’t been there, I’d rather leave it to your imagination than ruin the surprise. Though you can walk it with the help of stairs (and I suppose the people-watching would be fun), I personally think you get the best experience by driving down.

The address below will take you to the top of this one-way street.

No trip to San Francisco is complete without a visit to Fisherman’s Wharf. Beyond strolling around and taking in the atmosphere, the highlight for us was San Francisco Maritime National Historical Park, part of the National Park Service.

The small and free museum is extremely well-done, but make sure you don’t miss the ships across the street. For $10/adult (ages 15 and under are free), you’ll get a seven-day pass to three different vessels.

As we were wrapping up our time in Chinatown, we realized we were only a block away from Jack Kerouac Alley and City Lights Bookstore, an area frequented by the Beat Generation in the ’50s. The whole upstairs room is dedicated to poetry and an exceptional selection of Beat authors, but the bookstore as a whole is everything I love about independent bookstores. Stools and chairs are left around the store to encourage people to stop and read for a while.

Things We Ate in San Francisco

We prefer low-key, casual, hole-in-the-wall restaurants, so that’s what we looked for on Yelp. Yin Du Wonton Noodle looked like our kind of spot.

The place was full at lunchtime on a Sunday, and the server was matching newcomers with empty chairs at tables where people were already sitting. We had experienced this type of communal seating at our favorite restaurant in Toronto’s Chinatown, King Noodle. At Yin Du, we ended up sitting with two friendly couples who helped us navigate the menu and made suggestions for us.

For my part, I loved my meal. I had wonton soup with noodles and brisket, and thought everything was delicious. Eric ordered the same thing, but not in soup form (he did get broth on the side and ended up making his own soup). I’m gonna put this out there and say that Eric is super picky about food, and gets totally turned off by little things. I tried to explain that fat on meat doesn’t have to be a bad thing, but he wasn’t having any of that.

As we strolled down Grant Avenue to see the famous Dragon’s Gate at Bush Street, we stopped for boba tea at Sweetheart Cafe. Since it’s the only one we tried, I can’t compare it to other places in the area. But I thought it was comparable to other boba teas I’ve had, and it was cool to see some of the unique desserts on the menu.

What’s a visit to San Francisco without sourdough bread? There was a line out the door at Tartine Bakery in the Mission District, and one glance at the dessert case offers the explanation. Definitely check out this fabulous article that has gorgeous foodie photos and recommends some of the best things to order (but how will you choose??).

I wanted to come back over and over again until I had tried everything. But for this visit, I took a regular croissant, pain au chocolat and huge loaf of sourdough bread to go. I really wanted to try the frangipane croissant, but it was towards the end of the day and they had sold out.

We headed to the more missiony part of the Mission District for dinner. I thought I was hungry, but little did I know I didn’t have enough room for the super burrito at Taqueria el Farolito.

The carne asada super burrito seems to get the highest praise in online reviews, so Eric and I both ordered one. Two stuffed tummies later, with half a burrito left over, we concluded we could have easily shared one. Lesson learned.

Now, people, this is a dive. A cash-only, can-I-get-some-napkins-to-wipe-off-this-table dive. But it also provided me with the best burrito I’ve ever put in my mouth. So you can take it, or leave it. When was the last time you saw a Yelp page with over 3,800 reviews?

Down the Road in Petaluma, CA

As I mentioned, we were actually camping in Petaluma, about an hour away from San Francisco. The highlights were:

While we were staying in Petaluma, we took a drive to the fishing village of Bodega Bay, about half an hour away. It was on the chilly side during our visit because the wind really whips in from the water, but I imagine this would be an awesome place to hang out during the zenith of summer.

We highly recommend Fishetarian for your meal. While the cod fish and chips weren’t the best (because they were made with cod), the clam chowder was fantastic and I was exceptionally happy with my fresh salad and house dressing. The menu is extensive, and the seafood is fresh.

We’re continuing to make our way north to Seattle, staying in Redding right now. Though we’ve left the Bay Area, we know we want to go back. So please share any recommendations for next time.