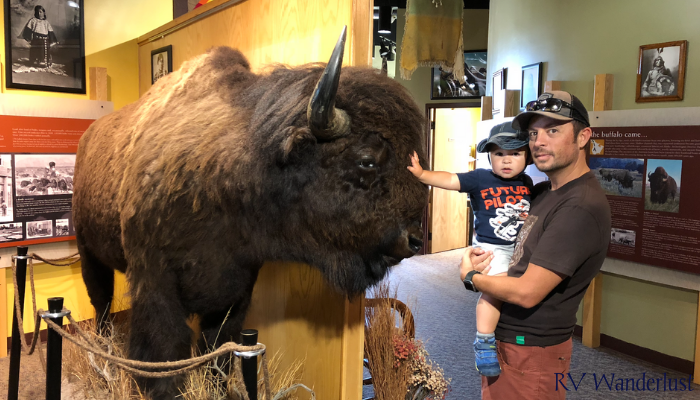 South Dakota’s Black Hills have magic in them. This wonderland of nature is at once mysterious and easy to access. The old, towering trees will give you strength. The wildlife will charm you.

Quite unlike our norm of arriving in a new place and parking there for two weeks, we bounced around the Rapid City area for nearly a month, camping at a total of five spots.

If I were to structure this travel log like I normally do–campground, activities, food–then I might as well publish it as a book. This time, I’m going to try a shorter form that traces our movements in each area. If you have a question about a specific place, don’t hesitate to leave a comment and I can elaborate for you.

Out of Our Way for Unpredictable National Forest Spot

It was such a long driving day from Medora, ND. I asked Eric to push even farther because I had found a dry camping spot on Campendium that looked gorgeous and peaceful. When we arrived at Long Draw Road in Black Hills National Forest, which required driving through Deadwood and Lead, it was occupied.

If we were a van or maybe a small Class C, we could’ve shared the small loop. But we’re 40-feet.

We were tired, hungry, and grumpy. There was no other parking option anywhere near us. Thankfully, the couple there said we could block them in for the night. The kindness of strangers.

Eric really disliked this spot because it required crossing a culvert of some sort, with a shallow drop on either side. Shallow or no, it would’ve been a disaster if 30,000-pound Meriwether had fallen in.

Though I didn’t think it was too big of a risk, Eric was really stressed as he navigated us into and out of the site. Sorry, love.

On the up side, it was an incredibly gorgeous and secluded spot.

Illegally Parked at the Visitor’s Center

A local business owner I met at Lotus Up Espresso said quite confidently that we could stay overnight at the Lead visitor’s center for up to three nights.

When we arrived at the visitor’s center, we asked in person and they confirmed it was okay with them if we stayed overnight. For the record: don’t stay overnight at Lead visitor’s center. As we were leaving after two nights, a police officer stopped us and said there was no overnight parking. I felt bad, but we had done our due diligence.

Over that weekend when we were blissfully unaware of our guilt, we explored Deadwood’s main street (less than 10 minutes away). It wasn’t quite my scene. Not as kitschy as Tombstone, but still too much for my taste. I did enjoy my flight of local wine at Deadwood Winery.

Before we left Deadwood, we had delicious chocolate at a local confectionary called Chubby Chipmunk.

That Saturday was dedicated to Badlands National Park. I wasn’t sure what to expect, and was curious whether it would be basically the same as Theodore Roosevelt National Park. I knew there were rock formations, but wondered how they could compare to the beautiful parks in Utah we’d seen earlier in the year.

But then we got there, and I was reminded that each national park is preserved for a reason. They’re all different, with their own ecosystems, species, and treasured history. Badlands has one of my favorite visitor center films. The cinematography is gorgeous, and I loved the stories of the animal populations that have been restored.

We took a spontaneous detour to Minuteman Missile National Historic Site. It’s only about eight miles north of the Badlands loop. We went there, then came back to finish the drive around the national park.

Though we arrived at Minuteman too late in the day to see the silo, the visitor’s center museum was interesting and impactful. I reflected on how different Minuteman is from other National Park Service sites. It isn’t all about something that took place a long time ago. Rather, it centers around a heavy topic–nuclear proliferation–that continues to be relevant today.

We had to visit Wall Drug Store while we were in the area. I got my 5-cent coffee (it was a little bit more because of the to-go cup). If you’re not familiar with this place, it’s a destination in itself.

Settling in at Ellsworth Air Force Base

After a one-night stay at Walmart in Rapid City, we were able to get a spot at Ellsworth Air Force Base for almost two weeks. The general public can visit South Dakota Air and Space Museum. It’s just outside the base and Caspian absolutely loved it. Admission is free. Gizzi’s Coffee is a local spot right around the corner.

We spent quite a bit of time in central Rapid City. There’s Pure Bean coffee, St. Joe Antiques Mall (we found Caspian a Fisher-Price school bus from 1962), and Roam’n Around outdoor supply store where we picked up some overlanding gear.

Just wandering around and looking at the president statues is a lot of fun. We liked seeing how quickly we could identify all of them.

We hosted an RV Wanderlust meetup at Que Pasa, my favorite local restaurant. The grilled brisket enchilada is awesome and margaritas are half-price from 3-6 p.m. Monday through Friday. The Gyro Hub is another yummy restaurant.

I couldn’t believe how much there was to do in the area. We visited Mount Rushmore twice (don’t miss the fudge!). I’m so glad we made a point of seeing the evening lighting ceremony.

Everyone described it to us as a “lighting,” so I was picturing a light show of some kind. Instead, there was an inspiring talk about liberty from a ranger, a genuinely patriotic film depicting the values our country is supposed to stand for, singing of the national anthem, and an invitation for all the veterans in the audience to come to the stage and be recognized.

It seemed nearly half the crowd walked down the aisles, including Eric, as the rest of us applauded. Six volunteers retired the flag, as all the veterans on stage rendered a salute. A World War II veteran was there to participate.

I’m embarrassed to admit I didn’t know Wind Cave National Park was right outside Rapid City, until we got to the area. I knew the name, but never processed what part of the country it was in!

The highlights were the cave system and the prairie lands. We’ve been so many places with bison this year, but this was our best viewing experience. The herd walked all around us, with bison of all ages and gender. The bulls were making sounds like we’ve never heard. It’s amazing how visitors to Yellowstone can stop traffic to see one bison in the distance, but a lesser known park like this can offer such an incredible experience up close.

We hiked to Mount Roosevelt one sublimely beautiful afternoon. (This is back in the Deadwood area.) It was 0.8-miles roundtrip for Caspian, and he hiked it all on his own. We’re still trying to get him to that one-mile mark before he turns two in December.

Tatanka is in the same area. This spot was recommended to us a couple of years ago by our friends at Always on Liberty. In an extremely touristy area, Tatanka isn’t about making money. It was founded by Kevin Kostner to honor the American Indian, the bison, and everything that has been lost. The focal point is this phenomenal sculpture.

After our outing to Mount Roosevelt and Tatanka, we had an amazing dinner in Spearfish at Steerfish Steak & Smoke. I think this was our best meal in the Black Hills area.

Our final camping spot was in Black Hills National Forest, about 25 minutes outside Custer, SD. We had no idea what to expect as we wound over miles of dirt roads to get to our friend’s house in the woods.

Suzann was still at work when we arrived. We actually considered leaving because we could get absolutely no cell coverage for work. Providence compelled us to wait until Suzann got home. Because of that, we enjoyed six days and nights of rest at this idyllic hideaway.

We were able to use Suzann’s high-speed Internet for our work. We could only access it in her house and on her patio…not in our RV, which was parked 25-feet or so from the house. While it took getting used to, the setup provided a work/life balance we don’t usually get. I became conscious of how many times a day I pick up my phone without good reason.

As far as activities in the area, we loved our drives through Custer State Park. The visitor center is gorgeous and don’t miss the incredible film narrated by Kevin Kostner. We drove the Wildlife Loop (18 mi.) and Needles Highway (14 mi.) on two separate days. We missed the annual buffalo roundup by less than three weeks, so that is still firmly on my bucket list.

Our final National Park Service site in the area was Jewel Cave National Monument. Like Wind Cave, I did the ticketed cave tour by myself. It was much more expansive than Wind Cave’s narrow system. The downside was I nearly froze to death–even with a jacket. (Note that cave tours are closed through mid-April 2019 for improvements.)

We went off-roading with Suzann and her local Jeep friends in Black Hills National Forest. Had I known we would be driving through cow pies, I wouldn’t have encouraged Eric to take the front doors off. Lesson learned. Level up.

There were some good eats in Custer, but we barely scratched the surface. I recommend Black Hills Burger & Bun (pictures above), The Custer Wolf, and Begging Burro for Mexican food. Burger & Bun is really popular. If you can, arrive a few minutes before opening so you can get a table. Also note that the hours are strange, and weren’t consistent during our stay. Make the extra effort; it’s worth it.

Suzann told us a lot of the restaurants and local businesses in Custer shut down for winter, so you’ll want to keep that in mind as you’re planning your travels. I wouldn’t recommend RVing through South Dakota during winter anyway.

We did take the drive to Hill City for Alpine Inn. We had a nice visit with our friends from @wherethehekawie, who we hadn’t seen since RV Entrepreneur Summit. You’ve got to do the meal at least once. But if I were to go back, I’d sit at the bar for a glass of wine and one of the INCREDIBLE desserts. Cash only.

Final Thoughts + Where We Are Now

I missed the Black Hills for weeks after we left. It’s an incredible part of our country and I look forward to returning. Please leave a comment with any suggestions for next time.

My next travel logs will be on Scottsbluff, NE and Denver, CO. We followed Colorado with Santa Fe and Amarillo, but we were sick for a long time and had a lot of work to do, so not too much to report from our stays in those areas.

If you didn’t see the news last week, we’re selling Meriwether! Read our article and watch our Facebook Live video for the whys and wherewithals.

Meanwhile, I wrote this from the passenger seat of our Jeep, as we drove to Overland Expo in Asheville, NC. You can read about this exciting event on Eric’s Jeep blog, Jeepsies. Overland Expo is all about vehicle-based adventure travel.

Don’t worry–we’re not letting the grass grow under our feet.