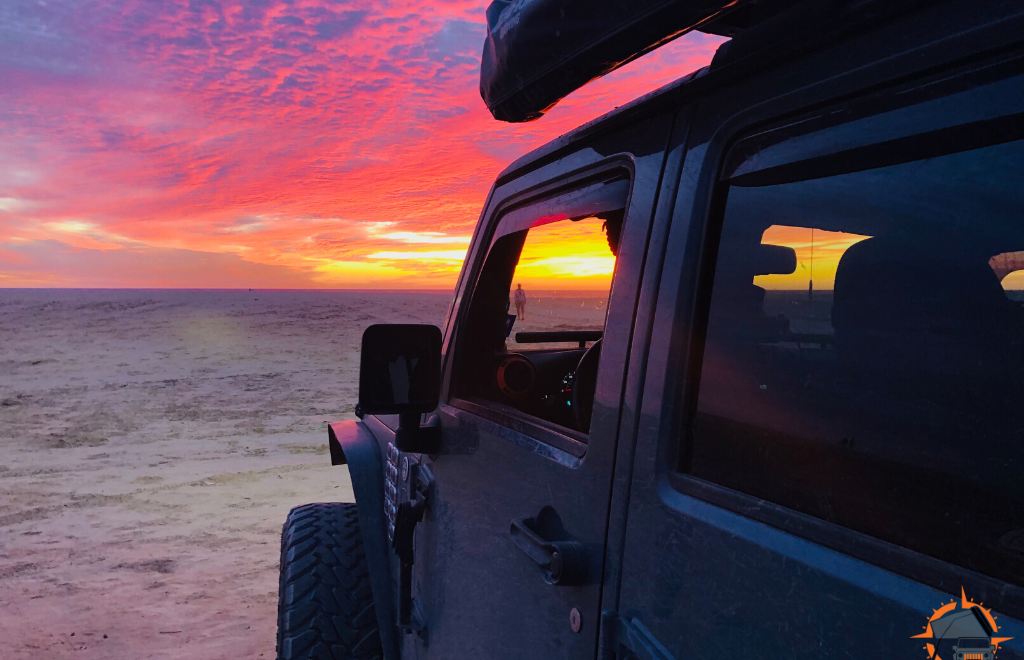 Look on any “Best of Baja” list, and Todos Santos is billed as the cultural mecca of the peninsula. It’s the small town on the ocean where artists thrive, while visitors happily browse shopfronts and relax on outdoor patios.

Or so the coffee table magazines would have you believe.

Not gonna lie: I love a little culture while I’m overlanding. Give me a cafe with ambiance any day, and I’ll happily return to my roof top tent and shovel toilet for the night.

So it goes without saying that I totally bought into the Todos Santos picture in my coffee table magazine (side note: I haven’t owned a coffee table in six years). Yes, I was looking forward to this town.

Watch video footage of Todos Santos on our Instagram Story.

DISCLOSURE: THIS POST MAY CONTAIN AFFILIATE LINKS, MEANING WE GET A COMMISSION IF YOU DECIDE TO MAKE A PURCHASE THROUGH OUR LINKS, AT NO COST TO YOU. PLEASE READ OUR DISCLOSURE FOR MORE INFO.

We spent two nights in Todos Santos, visiting from Monday to Wednesday. The town center is perfectly walkable, and we spent hours meandering from block to block. We stopped by art galleries, browsed colorful trinkets, found a local shop for tacos, and split up to enjoy a margarita (me) and ice cream (Eric and Caspian).

Outside of Baja’s major cities, I’d say Todos Santos is definitely the best-designed town for exploring by foot.

And “designed” may be the most appropriate term. While I pictured Todos Santos as an organic artists’ haven, reality is this town revolves around foreign tourism. While there are a few art galleries, there are more souvenir shops. One store surrounded by trinkets claimed to sell authentic Talavera pottery, when it clearly wasn’t.

And then there’s Hotel California.

I can’t tell you how many travel articles I read that said something like, “And stop by Hotel California, which may be the inspiration for the famous Eagles song!” Who wouldn’t be intrigued? Once in Todos Santos, the official town literature encourages the myth, billing Hotel California as “famous.” I sat on the sidewalk and watched tourists almost get run over as they stood on the street to take photos of the building.

Let me be clear: Hotel California in Todos Santos did not inspire the Eagles. The Eagles actually sued the hotel at one point, and the parties settled out of court in 2018. How this ruse goes on is really beyond me. Obviously Don Henley hasn’t been in Todos Santos recently.

I may sound like I’m coming down on Todos Santos, but I genuinely enjoyed being there for a couple of days. I loved the beautiful street art all over the walls of the town; I loved the little salon where Caspian sat on a giant cushion to get his hair cut; and I loved my magical moment on the beach.

We do our best to research as we travel, but it’s impossible to know everything before you arrive in a place. I first heard about the baby turtle release in Todos Santos the day we were going, from our friends @ourjourneyoverland. Once we were in town, we ran into other friends who were going to the release that evening and gave us the rest of the details.

And before we knew it, it was 5:30 p.m. and we were walking on the beach at Playa de Tortugas.

Here’s the story as I know it. Todos Santos is located in the northern region of the sea turtles’ habitat. As such, it’s colder and a local biologist noticed many of the baby turtles weren’t surviving. So she decided to start an organization that relocated the turtle nests to a greenhouse, monitored the eggs as they hatched, and helped release the baby turtles to the ocean.

The season begins in December and is coming to a close now (beginning of March).

Kids or adults can actually volunteer to be a “biologist for a day.” Their seven-hour shift involves checking the nests regularly to see whether any baby turtles are digging themselves out. The new babies are kept at the right temperature throughout the day, then released to the ocean at sunset.

We arrived shortly before the release. The two kids of the biologist who started the organization, ages about 12 and 15, arrived on an ATV. They expertly answered a host of questions about the turtles, took donations, sold t-shirts, and then coordinated the release.

When the time came, Caspian and I shared a baby turtle bucket with two other children. We lined up on the beach with the others and gently dumped out our bucket of baby turtles. We watched as the turtles righted themselves, then instinctively started their march toward the waves.

The waves were giant and the undertow massively powerful. The babies endured wave after wave, being pommeled and turned over on their backs. It was really something to watch.

The sun set brilliantly right in front of us. In the distance, we saw whales breach and release water from their blow holes. It was all absolutely magical.

Where We Camped in Todos Santos

The best part of our magical night was we returned to our Jeep, pulled out onto the beach a little farther (no where near where the turtles come to nest), and camped for the night.

And the sunset was the best we’ve had in Baja.

There were about half a dozen other vehicles camping, all vans or larger RVs. The downside is the lack of privacy, and there’s really no convenient place to use as a wild bathroom. But it was awesome for one night.

For our second night in Todos Santos, I wanted somewhere closer to town where I might have better cell coverage for work.

The campground in Todos Santos is called El Litro. But recent iOverlander reviews said it’s filled with fleas. Because I have a three-year-old whose MO is rolling around in the dirt, I don’t do fleas. El Litro was out.

There was another place on iOverlander called Casa de Brinco. The owner had left the only review, saying he has two tent spots, one small RV space, and one bed in the house. We decided to drive over and check it out.

The owner, Brinco, answered the phone when we called the number on iOverlander. He came right out to meet us and directed us on where to park. We pulled into a small dirt drive between his house and the neighbor’s.

We enjoyed our night there. Brinco and his wife, Tempest, are both from California. They’re building a life in Todos Santos with their almost three-year-old son.

Their property is a work in progress. It was in really bad shape when they bought it, so what you see is a marked improvement and something they’re rightfully proud of. The bathroom has a shawl for a door and a bucket-flush toilet. The shower has hot water, though we didn’t use it. There’s also an outdoor sink for washing hands and dishes.

Our number one request was that Brinco grade the driveway, so it would be more level. We used our GoTreads and still couldn’t level out.

But overall, it was really cool to witness a family making a life in Todos Santos–to get to know their story, dreams, and experiences in the community.

There is unsatisfactory cell coverage in Todos Santos (if I haven’t mentioned yet, I’m working off AT&T). I got very limited coverage on Playa de Tortugas and unusable “coverage” at Casa de Brinco–which is closer to the center of town.

So both mornings, we ended up going to local coffee shops to work. Both of them made for excellent work hubs and places to hang out, so they’re definitely worth mentioning.

Doce Cuarenta Cafe is a gorgeous property on the outskirts of Todos Santos. The square barista area is in the middle of the cavernous improved warehouse, with spacious booths and tables on one side. There’s an open kitchen in a corner, with shelves of delectable baked goods and wine bottles nearby. A brilliant mural covers a wall.

In other words, it’s a real treat for the senses after traveling the desert miles of Baja.

The Wi-Fi worked great for us. We were able to set up at a booth, enjoy coffee, hot chocolate, and cinnamon rolls, and work undisturbed for a couple of hours. I was super proud of Caspian, who managed to (semi)occupy himself during that time. Three-years-old is looking good on him.

We were disappointed that Doce Cuarenta is closed on Tuesdays. In an effort to find a substitute, I landed at Caffe Todos Santos. Cojoined with a charming restaurant called Tre Galline, the cafe is a small, colorful spot–also with good Wi-Fi for working.

Note: it doesn’t have as much seating as Doce Cuarenta, which could be a problem at busier times.

Food and Drink in Todos Santos

Neither Eric or I drink beer, but we know breweries usually have good food. So we checked out Todos Santos Brewery and it ended up having the best burgers we’ve had in Baja–and a lot of places in the U.S.

Yeah, we went back a second time for that one.

For a more hyperlocal, affordable meal, try lunch at Alma y Many’s. My favorite thing was the chicken tostada, but the tacos were pretty good, too.

Ah, Tequila Sunrise. Supposedly, the margarita here has won numerous national awards. I couldn’t hack it and ended up with a headache. It was probably the midday sun.

In better news, the sidewalk seating is great for people-watching. Remember the tourist taking photos of Hotel California?