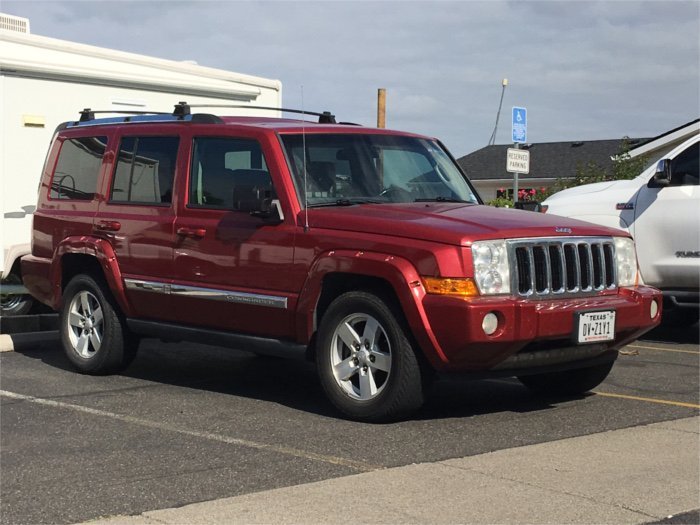 The unknown is exciting, but it can also be inconvenient. Case in point that every full-time RVer can relate to: taking two times longer at every grocery store because the layout is completely different than any grocery store you’ve ever been to. Which leads to awkward searches with grocery store employees who end up proving they know their own grocery store about as well as you do.

But there’s inconvenient, and then there’s borderline disastrous. And so begins the tale of that one time our tow vehicle gave out in the middle of an 11-month cross-country RV trip. Which may or may not have happened to us approximately seven weeks and five days ago.

Okay, so we don’t actually tow. But since I was going for conciseness, my article title stands. From this point forward, I will refer to said non-RV vehicle as “our Jeep” or, more affectionately, “Smaug.” Smaug, our faithful 2006 Jeep Commander with 150,000+ miles who had never given us a moment’s heartache. Sigh…RIP.

When You Ignore Strange Noises

Picture, if you will, a bright and breezy Saturday morning. The day is young and full of promise. You’re in the Pacific Northwest, and the weather is everything you hoped June would be after driving 2,500 miles north from the heart of Texas.

Eric and I were ready for a road trip. We had snacks, drinks, pillows and our favorite tunes. But when we turned Smaug on to warm up, we heard a strange noise. “Do you hear that?” as I turned down the music. It sounded like a goblin knocking on the underside of our hood.

Ever the ingenious trouble-shooters, we popped the hood to check the fluids. The oil was slightly low, but nothing to worry about. The coolant was empty, a recurring problem for the past few months. We filled the reservoir and started the engine. There was the knocking again.

Not in the mood to let anything get in the way of our perfect day, we decided to drive slowly around the RV park to see what would happen. The knocking continued for a while, and then it seemed to stop. “Alright!” Obviously we had fixed it and everything was okay, so off we went.

We had an amazing day. We stopped for a seafood lunch in Seaside, then continued up the Oregon coast to Lewis & Clark National Historic Site. We finished with a quick jog to Astoria and a walk up and down main street. The weather was sublime and we were enjoying our Saturday together. (You can read more about our day trip here.)

Meanwhile, Smaug was “mostly fine.” On the way to the park, he was jumping ever-so-slightly when I accelerated, but I decided to assuage my fears and focus on the scenery.

After getting gas in Astoria to begin the drive home, the real trouble started. All of a sudden, Smaug started vibrating whenever I accelerated. It was kind of like going over rumble strips, except the entire vehicle was shaking violently.

The two-hour drive was torture. I tried to find a speed that would make Smaug happy, but he was so sad. As we kept going, just trying to get home, the vibrating became worse and more frequent. We debated whether we should pull over and call AAA for a tow, but by this time it was almost 5 p.m. on a Saturday. We knew all the mechanic shops would be closed until Monday morning.

You know the urge to Google your symptoms when you have a weird pain? And how you always discover these terrifying illnesses you’ve never heard of before and start fearing the worse? We’ve obviously never done that for ourselves because that would be silly, but we definitely did it with Smaug.

Eric went on all these forums and websites and found many deadly, cost-prohibitive problems that Smaug probably had. We’re not even remotely mechanically-inclined, so we trust everything we read on the Internet when it comes to vehicles.

I was in denial. I didn’t want to accept that our only vehicle might be on the fritz. We were planning on getting a new one in March 2017, but that was a long way off and we hadn’t saved up the down payment and we weren’t ready to start making monthly payments on a loan.

We didn’t/couldn’t go anywhere on Sunday, so I had time to come to grips with Smaug’s demise. Eric said we should plan for the worst and hope for the best, and by the afternoon I was semi-ready to cooperate.

First, we made an appointment for Smaug the next day (Monday) at Everett Street Autoworks. Their Yelp reviews were impressive, and we hoped we could trust them to give an accurate diagnosis and fair repair cost. Even though it was Sunday and they were technically closed, someone approved our appointment time within an hour or two, and we made plans to be at their downtown shop first thing in the morning.

That done, we had to agree on how much we were willing to pay to repair Smaug. He was no spring chicken and had a ton of miles on him, so his Kelley Blue Book value wasn’t very impressive. We decided that if the repairs were going to be more than $1,500, we would need to say good bye and look for another vehicle.

Lastly, I created a document called “Smaug Crisis Aversion.” It was filled with notes about Smaug’s value, what our options were if we couldn’t repair him, and what our vehicle purchase options and budget were if we had to go that route. It was stressful.

At that point, we had done everything we could do until we knew what was wrong with Smaug. I put on Netflix and cried myself to sleep. (Not really, but both Eric and I were genuinely apprehensive.)

Is Bad News Better When You Expect It?

We had Smaug at Everett Street Autoworks by 7 a.m. on Monday morning. Since we normally start work at 7 a.m., we were eager to find a place to settle in while the mechanics did their thing. Owner Jake Hammer was behind the front counter, and he recommended we go around the corner to PINTS (coffee shop in the morning, brewery after noon). When we told PINTS who had sent us, we were pleasantly surprised to learn that Everett Street Autoworks always covered their customers’ coffee there. Super cool.

With high-speed Wi-Fi, all we could do was try to concentrate on our client work while we waited for the phone call.

And come, it did. After a few hours, Jake called to tell Eric that at least one of our cylinders was bad. Since Smaug had a V8 Hemi, that meant we would have to replace all four cylinders in that row. Worse, Jake thought there may be further issues, but he didn’t have the proprietary tools he needed to complete the diagnosis. And even if he did, he would have to take off the engine cover, which would require hours of labor costs.

With the cylinder repairs alone, we were over our $1,500 threshold. So that answered that.

We were in a sticky situation. We didn’t have reliable transportation, but we needed to shop for a new vehicle. More importantly, I had to be at the Portland airport in just a few hours to fly to Austin for a prenatal appointment. We went ahead and reserved a rental at Enterprise’s airport location, which was near our campground.

Packing up our laptops (thanks again to the PINTS staff who were super hospitable during our morning there), we walked back to the shop.

Little Encouragements to Keep Us Going

Everett Street Autoworks was absolutely fantastic. First, they bought us coffee. Then Jake charged us $0 because he wasn’t able to make a full diagnoses, even though his team had been working on Smaug all morning. Then he invested his time and expertise as we talked through our options together. Then he mentioned that, by the way, there was a Dollar Rent A Car around the corner that had a special price for Everett Street Autoworks customers: $25/day, unlimited mileage.

Seriously, we have never experienced service like this at a mechanic shop. Are you anywhere near Portland? Look them up.

After cancelling our Enterprise reservation, we walked into Dollar Rent A Car and picked up a new Subaru Legacy. For a fraction of what we were going to pay Enterprise for a compact car. Eric picked up Smaug and followed me gingerly, back to our campground.

We thanked God for the small encouragements to keep us going. The stress was still on full-force, as we questioned whether we would be able to find a new vehicle, how much we would have to pay for it, what we would do with Smaug, whether I would get to the airport on time that night, whether we would have a vehicle to pick up our kids in Seattle for our scheduled summer vacation together in five short days.

After a lightning-fast regroup and a quick lunch at home, we took my overnight bag for Austin and the rental car, and we set out to go vehicle shopping.

Next article: When Your Tow Vehicle Gives Out During a Cross-country RV Trip, Part II