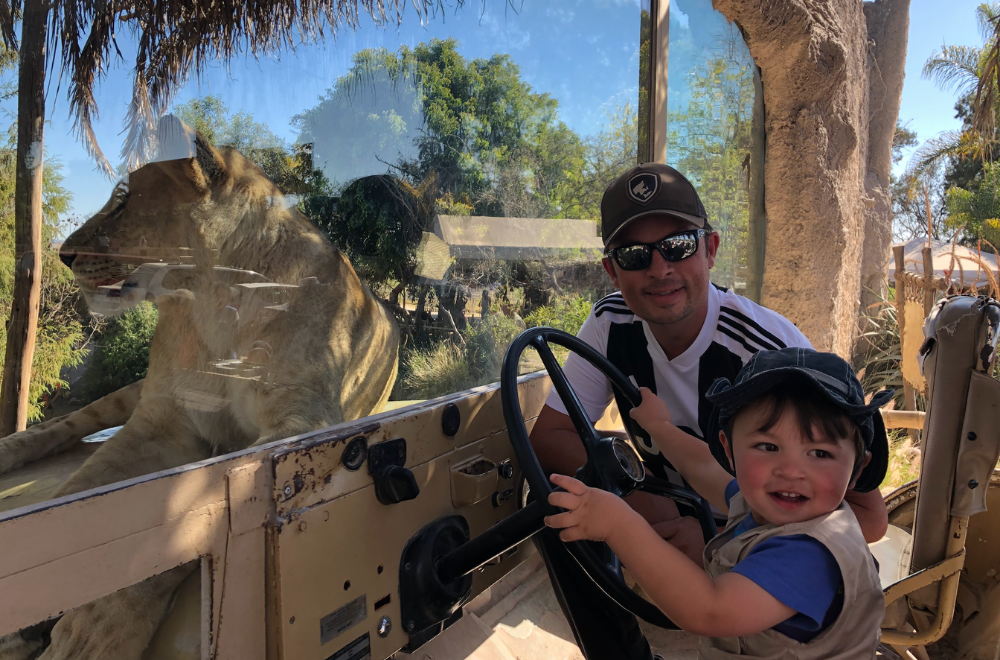 Eric spent part of his childhood in Puebla, where we’ve spent the past 19 days. In fact, it was here that he learned the Spanish language before he learned English.

One of his fond childhood memories is of a place called Africam. At Africam, just outside the city of Puebla, you can drive your vehicle through an African safari experience (or take a taxi or tour bus).

An African safari almost 800 hours miles south of the U.S./Mexico border. Why not?

The Layout of Africam

The vehicle route through Africam is a continuous loop marked with arrows. You’ll drive through open ranges for the animals, with areas separated by gates. Drive cautiously, as animals commonly cross the road or even sit in the middle of it.

Along the route, there are two parking lots where you can stop and get out. The first stop is nothing more than a gift shop, snack bars, and restrooms. Everything here is identical to what you’ll see later, so you aren’t missing anything if you keep driving.

You’ll definitely want to get out at the second parking lot, where there are zoo exhibits of lions, hippos, and chimpanzees. We’ve never been so close to lions, who seem to enjoy entertaining the faces on the other side of the glass.

The final and largest parking lot marks the end of your visit. We were surprised to discover how big “Zona de Aventuras” is. It holds two restaurants, botanical garden, amphitheater for shows, gift shops, and a sizable zoo. You can easily spend a couple of hours here.

We visited for the first time on a Friday afternoon, and there was hardly anyone there. It was awesome to be able to drive at our own pace and spend as much time as we wanted at the zoo exhibits.

The following Monday when we returned with my parents (who flew in from Texas to visit!), it was a mad house. Because people were off work for Constitution Day, a government holiday, most of the driving portion was bumper-to-bumper with frequent stops. On the plus side, all of the vendors were open and the zoo area felt more vibrant.

Which Animals You Should Expect to See at Africam

If you’ve ever taken a Kilimanjaro Safari at Disney’s Animal Kingdom, then you probably remember the graphic at the front of the bus, which names the animals you might see along the way.

Unfortunately, Africam has nothing of the sort. Consider it a test of your animal knowledge. We won’t judge if you make up a few names and facts along the way.

Here are a few of the safari animals we think we identified correctly:

When it comes to zoos and the like, I’m hypersensitive about living conditions for the animals. While it makes me sad to see small habitats for creatures accustomed to huge ranges in the wild, the animals at Africam appear to be well cared for.

What spoke most strongly to me was the number of babies I saw, including a six-month-old elephant alongside two elephant two-year-olds. There was a young zebra, as well, still with its brown stripes. If animals aren’t thriving, then they won’t bear healthy young.

A Little History of Africam

And now for some interesting history behind Africam, taken from the official website, as well as Eric’s family members who have grown up in this area. Africam was founded by Carlos Camacho in 1972, who originally had a private collection of exotic animals at his residence. The “cam” in Africam comes from his last name.

In 1976, a Bengal tiger attacked a family that had gotten out of their vehicle. Camacho stepped in to help and was clawed by the tiger. He ended up dying when his wounds became infected.

Control of Africam passed to Camacho’s wife, and then to the couple’s eight children. The park has expanded widely and successively in the 30-odd years since Eric visited as a child. Back then, vehicles drove through an open area with the lions, and there was an official death toll that used to be reported on the news.

Nowadays, only the Siberian tiger gets an open pen.