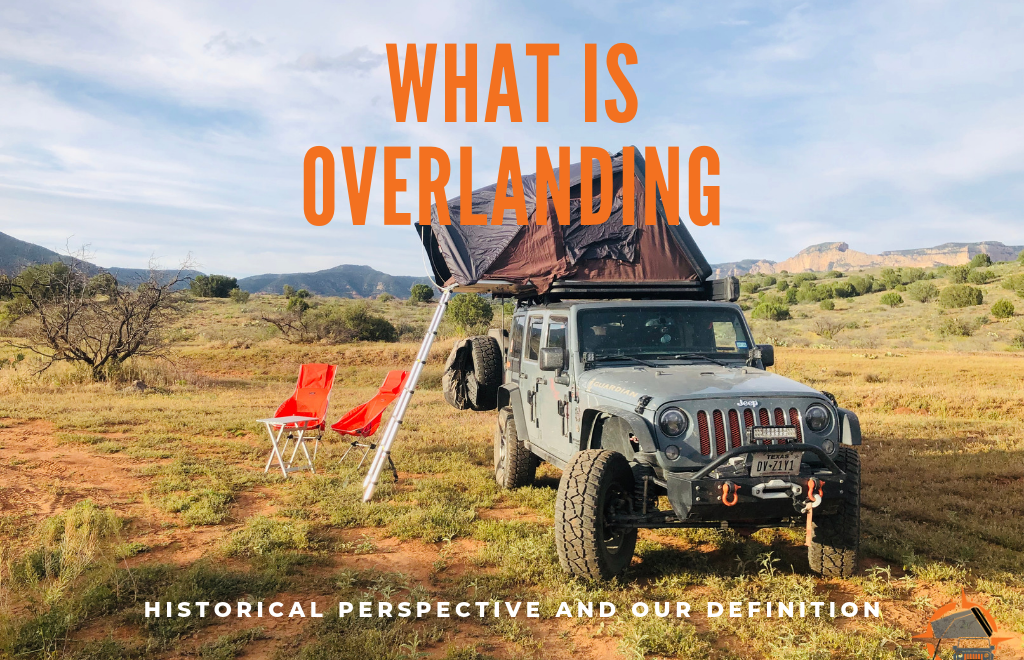 Defining overlanding is not an easy task. In this article, I’ll attempt to define overlanding to the best of my ability.

It should be noted that many modern day “overlanders” like to poke fun at anyone attempting to define the term. Everyone seems to have their own take on what overlanding is.

Sadly, some folks can be downright snarky while poking fun at others for their attempts to find a definition. The off-road and overlanding forums out there are replete with comments like, “That’s not overlanding! That’s car camping!” or “Oh, so now you have a roof top tent and you think you’re an overlander? LOL!” And these are some of the “nicer” comments.

I’m sure there are some reading this with a grimace on their faces, salivating at an opportunity to rip my article to shreds. That’s okay. Though, if you fall in this camp, I hope you’ll still give the article a chance. At the end, if you still feel the need to correct me, then lay it on me.

I’m definitely not above correction. The more I learn about this overlanding obsession of mine, the more equipped I am to help others join me in this fascinating journey.

The truth is I’m not only an overlander, but I revel in the opportunity to learn something new. So a bit of research went into this article. If you are truly interested in what I believe overlanding is, then read on. I’d love to have you comment on the article and let me know what you think.

The Origins of Overlanding

The origin of the term overlanding comes from the Outback in Australia and the droving of livestock across long distances to market.

Droving, for those not familiar with the word, is moving livestock over long distances. Droving was typically done by horseback or on foot, and with the aid of dogs, by walking the livestock “on the hoof.”

The first significant recorded event of this nature was in 1836 when Joseph Hawdon moved 300 cattle from the area of the Murrembidgee River in New South Wales to Melbourne, Australia in 26 days, covering a distance of around 300 miles.

In the early 1900s, “regular” routes for droving began to develop. Consider these among the first commonly recognized overlanding trails.

In the 1940s and ’50s, a surveyor named Len Beadell began constructing roads into the Australian Outback and naming these roads:

These roads are still in use today by Australian overlanders.

What we learn from the historical origins of the term overlanding is–at its roots–overlanding has the connotation of traveling over long distances and various terrains on a multiple-day journey, where the traveler is forced to be self-reliant.

Here in the United States, we have our own overlanding pioneers. Lewis and Clark, and all those who traveled west in search of fortune and a future, meet this definition. After all, those trailblazers traveled over long distances and various terrains on a multiple-day journey, and were certainly forced to be self-reliant.

From 1920 to 1950, there were many who began to do this type of travel around the globe via wheeled and motorized vehicles, including bicycles, sailboats, motorcycles, and eventually 4×4 vehicles.

I learned much regarding these pioneers in my research, but I won’t bore those who have no interest in those details. If you’re like me, you’ll probably look them up for yourself by Googling these terms:

All of the above stories are inspiring. These folks literally blazed the modern overlanding path that the rest of us follow today.

So we need a more modern definition of overlanding. It isn’t about work any longer; we aren’t droving cattle. It is about the experience and adventure, and the enjoyment of the journey. It also involves motorized vehicles.

Nowadays, thousands upon thousands of people, including my family, have taken to the modern overlanding movement these people pioneered.

The Definition of Overlanding

So what then is the true definition of overlanding?

I’m going to give several and this isn’t a cop out. At the end of this article, I’ll define what overlanding means to me.

For now, I hope we can all agree with the following:

Overlanding: Self-reliant travel over an extended period of time, during which the traveler experiences differing terrains.

Modern Day Overlanding: Vehicle-based, self-reliant travel over an extended period of time, during which the traveler experiences differing terrains and the experience, adventure, and enjoyment of the journey itself are the goals of the traveler.

So there you have it. For now, this is how I answer the question, “What is overlanding?” This definition may change over time if I feel there is significant cause for it.

But this is something I’d add to a dictionary. What I hope will be more insightful is how I personally define overlanding, and what it means to me.

What Overlanding Means to Me

Our journey has brought us here. For those who don’t know, we’re currently on our sixth year of full-time travel, as of this writing in mid-2019.

Some might describe us as “location independent.” I don’t really like that term, but it’s an accurate descriptor of what we’ve been doing for quite some time. We own no real home or property. We love to travel and–more importantly–to make memories and experience the adventure that comes along with this lifestyle.

Our location independent journey began on Feb. 21, 2014. At that point, we called ourselves full-time RVers. That portion of our lives has been faithfully documented on RVWanderlust.com.

Through our RV travel, we’ve done incredible things and met amazing people. But what we really appreciated about the lifestyle were the micro-cultures found within our very own nation. You miss this when you fly from one place to the next. Vehicle travel is slow and intentional.

Even though the full-time RV chapter of our journey was extremely satisfying, at some point it became our regular day-to-day. After all, we’d been doing it for five years. It had somehow lost its sparkle.

In June of 2016, we purchased a Jeep Wrangler Rubicon Unlimited. It was a stock Jeep at the time and had never been taken off pavement. The reason we purchased it was to take our adventures to the next level and push the limits of what we could do.

I created this blog, Jeepsies, at the time. Over the next two years, we modified the Jeep extensively for off-roading and took it on some pretty epic trails all over the nation. This started to bring back the sparkle, but there was something still missing.

May 2018 was life-changing for us. We were in Jackson Hole, WY, just outside Grand Teton National Park. Brittany had been listening to a podcast about a family known online as the Overlanding Family. Unbeknownst to me, it consumed her thoughts.

One day as we were driving into Jackson Hole, Brittany urgently shouted at me to pull over. I thought something was wrong with the Jeep or there was an emergency. No…it was just an overlanding truck for sale in a parking lot. Brittany jumped out of the Jeep, nearly kissed the beastly vehicle, and said, “This is what I want to do!”

I know my beautiful and introverted wife well enough to know that if she’s going to exclaim something this life-changing, in this fashion, then she’s put some thought into it before telling me. I also knew it was just a matter of time before we’d be traveling around the world.

We began to devour as much as we could about overlanding, pretty much exhausting YouTube in our search for what the lifestyle could look like for us. Full-time travel wasn’t new to us at all. But overlanding was something different.

We began to evolve our Jeep build from a rock-crawling build to an overlanding build, and eventually planned and executed our first international overlanding trip deep into the interior of Mexico. It was epic!

The sparkle was back.

My personal reflections on our journey, from the start of our full-time travel life to now, the amazing people we’ve met along the way, and the experiences we’ve had over the past five years have led me to define overlanding in my own way.

You ready for it? My definition of overlanding: A lifestyle of self-reliant, vehicle-based travel over an extended period of time, during which the traveler experiences differing terrains, micro-cultures, and people groups, and where the journey, experience, adventure, and memories made are the primary focus.

So there it is, folks. I genuinely hope you enjoyed this article and would love to hear your thoughts in the comments below.