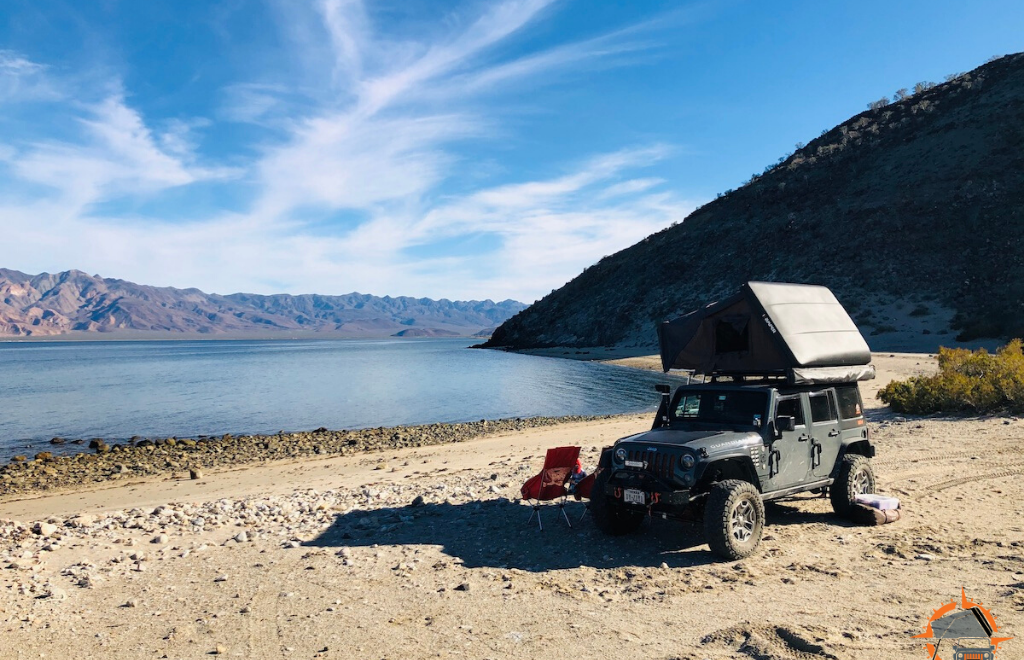 After our near escape from the tidal forces of Gonzaga Bay, we headed to Bahía de Los Ángeles, 110 miles to the south on the Baja Peninsula.

In preparation for leaving the beach at Punta Final, Eric aired the tires down to 18 psi. So our Jeep Wrangler, Guardian, handled his exit over the dunes even more masterfully than the day before.

It took us 27 minutes on the sandy one-track to get back to Mex 5. Once there, we backtracked six miles to the Pemex gas station by Alfonsina’s. We knew we wouldn’t find (legal) fuel until we reached Bahía de Los Ángeles. (There was some black market gasoline along the way).

After fueling and using the baño at the Pemex, we didn’t stop until we reached “Bay of L.A.” (That’s what you call it if you’re in the know.) The road quality was superb. On many stretches, however, there is zero shoulder. One moment of distraction could lead to a flipped vehicle, so we exercised extreme caution.

First thing in Bahía de Los Ángeles, we had an open-air lunch at Restaurant Los Hamacas. Eric had garlic shrimp; I had enchiladas verdes; and Caspian had pancakes with delicious melon.

My Saturday margarita was made from fresh limes and served in a huge goblet. I couldn’t decide which was better: this one or the one at Alfonsina’s the day before.

As a sidenote, I’ve been loving iOverlander for food recommendations. Since it works without an Internet connection, it always offers a way to learn from fellow overlanders’ experience and find the best food in town.

Though it was only 2 o’clock in the afternoon or so, we were ready to make camp and relax. We’d been packing up and moving every day since entering Baja, and it does get tiring.

We thought we’d need to leave Bahia de Los Angeles and make it to Guerrero Negro by the start of the work week—so we could have Internet coverage. But the Church & Church camping book (affiliate link) indicated a few of the local campgrounds had Wi-Fi.

RV friends of ours recently stayed at Campo Achelon, so we decided to scope it out for Sunday night. It turned out to be a beautiful oasis on the water with a coffee shop, semi-enclosed palapas, a beautiful bathroom and shower building…and Wi-Fi. I broke out my computer to test the Wi-Fi, and it definitely seemed like it would work.

Eric was ready to start our stay because he was exhausted from his tide vigil the night before. But I narrowly convinced him to stick to the original plan, which was to wild camp on one of the beaches south of town.

So we headed out of town, unsure of where we were going. In fact, we did three U-turns before figuring out which way to go. Two U-turns were my fault, and one was Eric’s. ?

As you head south, you leave the pavement for sandy gravel. It looks like you’re just winding through neighborhoods and not actually going anywhere. But we followed what looked like the main road south on Google Maps. As the buildings ended, we saw a small sign for “playa.” We took the track and it led down to an empty beach. Home for the night.

In comparison to our night on Gonzaga Bay, the beachcombing wasn’t as good. The terrain was rockier, which meant it was easier to navigate with our vehicle, but not as fun for little bare feet.

Caspian and I did love the bird life in front of us: gulls, pelicans, snowy egrets, and a couple of species I haven’t identified yet.

After a basic setup, Eric headed upstairs to the roof top tent to sleep for an hour or so. I was entertained by Caspian and eventually started a simple dinner of bacon, avocado, tomato, and cheese wraps.

Later when Eric was awake, I mentioned I’d love to have a fire, but wasn’t sure we could gather enough fuel. There were clumps of scrubby bushes around, but we weren’t about to cut live plant life for a fire. I started looking more closely, and I was able to find dead branches that had broken off, and even a couple of large branches someone had thrown on top of the bushes.

Little Caspian helped Eric make a beautiful fire ring out of rocks on the beach while I finished scavenging. Our team effort paid off, and we had a short but beautiful fire. As the full moon reflected on the bay right in front of us, we counted our blessings and took in the surreal scene. Our first beach fire in Baja, Mexico.

Based on our Saturday scout, we were convinced Campo Archelon, the campground just north of town, would be a good place to start our work week. After picking up a few groceries at Mercado Xitlali and Mercado Isla (the latter had a better selection, though nothing like the Calimax in San Felipe), we pulled into Campo Archelon and chose an empty palapa named Estrella.

Pricing at Campo Archelon is currently $6 USD per person for camping without a palapa (basically just parking on the beach, with the ability to use all the campground amenities) or $8 USD per person for a site with a palapa. $8 USD equates to 140 pesos.

The palapas are really nice. Ours was huge and about two thirds enclosed–only the beach side was open. We strung up our hammock and had a long folding table to set out our things. There were also two plastic chairs.

Sunday was fun. @overlandbunch, a family we’d communicated with on Instagram before our trip, serendipitously pulled into the palapa next to us. Caspian is two months younger than their eldest son, and the two became fast friends.

Monday morning, I awoke at my regular 5 a.m. and knocked out most of my work with the camp Wi-Fi. But by the time Eric was ready to work around 7 a.m., the Wi-Fi was unusable. Whether it was the number of campers trying to use the network or the storm rolling in, we don’t know. But after trying for probably an hour, Eric turned to me and said, “We’re packing up and leaving.”

There was some conflict as I tried to remind him how much he’d wanted to stay in one place for more than a night. Maybe the Internet would come back later in the day and he’d be able to complete our client commitments then?

It wasn’t an easy decision, but we decided to stay and hope for the best.

On the bright side, the Internet did return and Eric was able to do what he needed to do. On the more challenging side, a storm rolled in and it was a rainy/windy rest of the day. Everything in our palapa had a layer of sand on it and I felt like I was excavating an archaeological site.

Campo Archelon is a lovely campground. The coffee shop is a gem for those who crave a caffeinated taste of home. And it seems to attract a wonderful assortment of travelers who are wonderful to talk to.

For us, a series of events led to discouragement and a desire to move down the road in search of clearer skies. After the Internet debacle, there was hot water woes in the shower house and the Westfalia full of Germans who pulled up next to us after dark and regaled everyone within earshot with unintelligible stories until 1 a.m.

(In all fairness to them, they were inside their vehicle and I don’t think they knew how much their voices were carrying. I used the opportunity to practice listening to the rise and fall of the waves, over their voices.)

When Tuesday morning broke, we woke early to work and packed up as quickly as we could. The wind was still whipping and we were ready for respite.

We found it on an off-road track to an old mission, but that’s a story for another day.