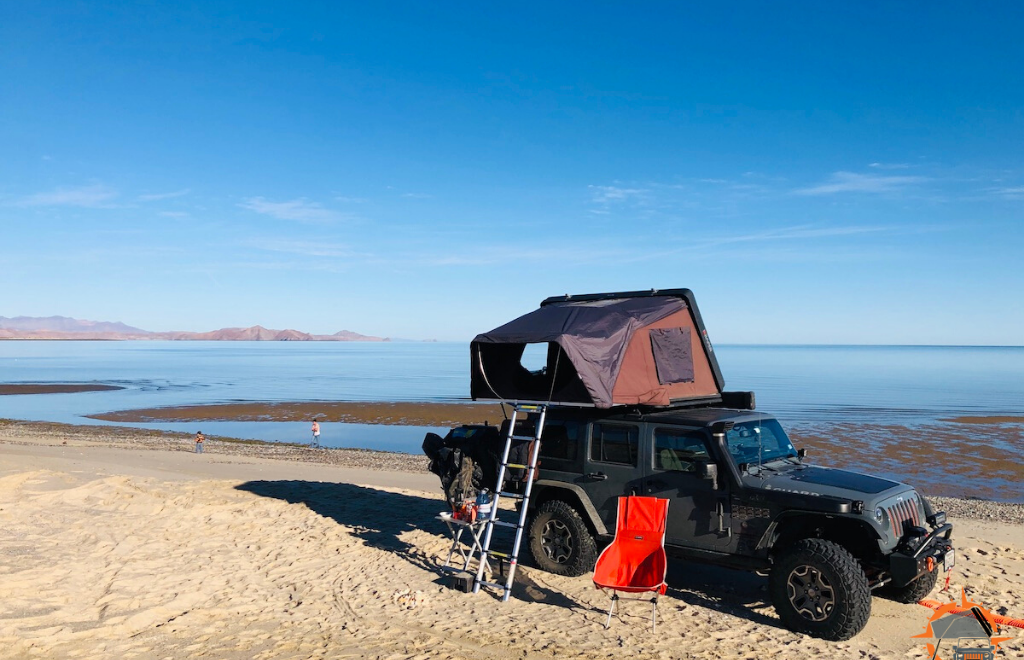 Gonzaga Bay. I’d heard about its beauty for so long, and now I was going to see it for myself.

I enjoyed our stay in San Felipe and could’ve stayed a few more days. But with Friday upon us, we had one goal: overland the more desolate southern region of Baja California over the weekend, when we didn’t have to worry about work commitments and could enjoy being off-grid.

So after making a quick lunch at La Palapa campground, we stopped for gasoline and groceries, and headed out of town. Our destination for the night, Gonzaga Bay, has a small population and limited services, so we took everything we might need.

The Route From San Felipe to Gonzaga Bay

Going south on Mex 5, we skipped the town of Puertecitos this time. Located about an hour from San Felipe, Puertecitos is known for its hot springs and had been recommended to us by friends. With sand falling through the weekend’s hourglass, we had our sights set on more desolate landscapes.

The drive down Mex 5 was a breeze. Road construction has been completed since the publication of Church & Church’s 2017 edition. We did detour for work on three or four bridges, but I expect this is short-term. The longest detour was two kilometers (1.2 miles).

As we continued south, the flora changed. We began to see more cardón cacti, as well as a new plant called the cirio cactus. It’s hard to explain, but some have compared the cirio to a large, green, upside-down carrot. To me, most of them look like extremely tall, extremely skinny evergreen trees.

Drinking With Friends at Hotel Alfonsinas

After less than three hours (100 mi/160 km), we spotted the Pemex gas station at the turn-off for Hotel Alfonsinas on shimmering Gonzaga Bay. We gave all kinds of information to the security guard before he handed us a temporary tag and opened the gate. There was no charge to visit the hotel, but we’d have to pay if we wanted to camp—the guard informed us.

Alfonsinas was a surprise. At the far end of a long strip of houses, right beside the bay, it’s a beautiful building with clean lines, regional floor tiling, and tasteful décor. It looks like they’re finishing work on a large addition.

As you enter, you immediately notice the open air patio with a full view of the water. I had to sit and enjoy a drink, while soaking in the moment.

My huge margarita, made fresh, was 90 pesos ($5 USD with tip). We made friends with two expats who had been in Baja for 20+ years, as well as a couple visiting from Colorado.

As a note for working overlanders, Alfonsinas does have Wi-Fi available for an additional charge. We didn’t test its reliability or ask about the price, but this could be an option for those of you who want more than a weekend stay at Gonzaga Bay.

Since we did have only one night, we wanted to find camp. Our friend @outboundbaja had recommended Punta Final, which is at the southern end of Gonzaga Bay. Looking at iOverlander, we started towards a camp site in that area. However, the coordinates eventually led to a closed gate with an admission charge. (This seems to be a Baja trend: beach access being gated off for a charge.)

So we made a hard left at the gate and looked for a track that would lead us down to the water. We then took the first right.

We hadn’t aired down our tires, so the climb up and over the dune was tricky. Eric kept his acceleration constant, and wiggled the steering wheel back and forth to maintain traction. Once we were on top of the dune, the sand wasn’t as deep. On the other side, we had to pick our lines carefully to avoid the deepest of the sand.

All that said: don’t be surprised if you get stuck on the beach by Punta Final. Have the right recovery gear. Enjoy your stay.

We had a dinner of arrachera tacos with guacamole, chopped onions, and cilantro. We turned in early, which we find ourselves doing when the sun goes down because it starts to get chilly.

Us Vs. the Tide

Just before 10:30 p.m., Eric woke up and looked out the window of the roof top tent. The tide was rising, and getting a lot closer to our Jeep than we’d anticipated. After watching out the window for a while, he got dressed and began a three-hour vigil.

His watch involved marking Ts in the sand and pacing out the distance to the water, to determine how quickly the tide was rising. He determined the water was coming up a foot every five minutes.

He then marked a “go” line. If the water rose that far, we would have approximately 50 minutes to pack up and leave. We would only need 20 minutes or less to pack…unless we got stuck. Thus the half an hour grace period.

I was enormously thankful he made this sacrifice in the cold. Though I didn’t really sleep while he was out there, I was very warm in our sleeping bag. I knew in my bones the tide was going to turn at any moment, and my prayers were answered when Eric came back to bed at 2 a.m.

This misadventure gave way to a beautiful morning on Gonzaga Bay. We had breakfast, were warm enough to wear t-shirts, and packed to leave at a relaxed pace.

Caspian had a blast on this beach, as there were beautiful whelks and other shells to collect, as well as rocks of different hues. We set him loose with his bucket and toy truck, and it was an idyllic picture of boyhood.

Previous article: All the Baja Feels Overlanding Through San Felipe