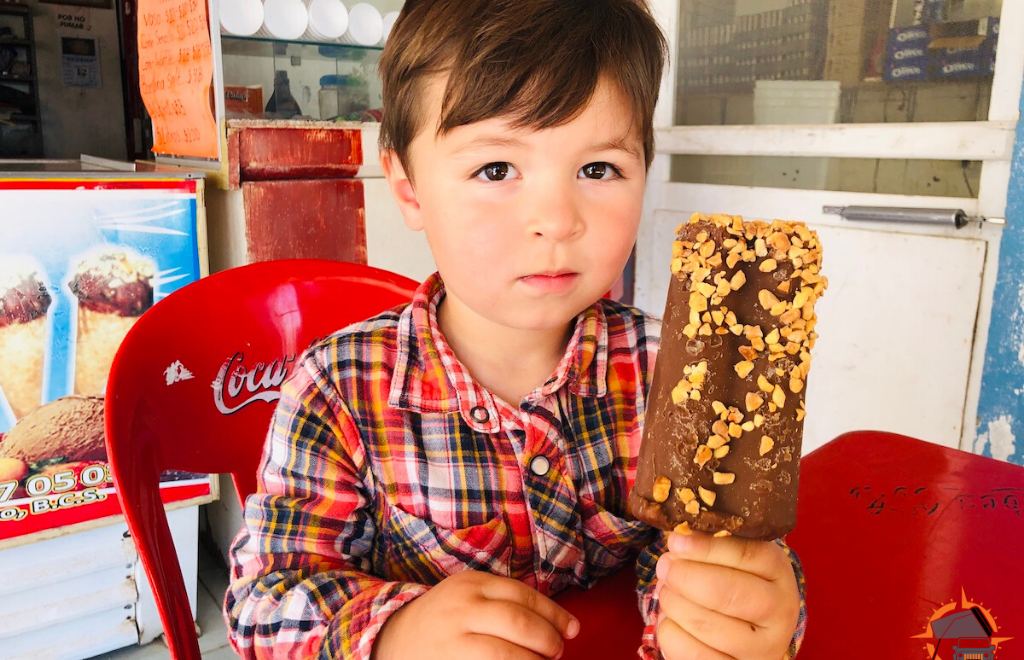 Guerrero Negro tends to be an exciting milestone for most overlanders, since it’s just south of the state line in Baja California Sur. It’s a great place to get fuel and groceries, do laundry, and get ready for the beach camping and small towns up next.

In my opinion, it isn’t the prettiest place. It’s a company town, built around salt mining operations. And it actually has a bit of an Old West mining town feel to it. Most of the streets aren’t paved, just sandy dirt. And it seems haphazard in its design–more utilitarian than anything else.

But it certainly gets the job done. And there are reasons to visit Guerrero Negro other than restocking. Most famously, there are many whale-watching operations in the area. And even touring the salt mines is a fun activity for many.

We weren’t sure how long we’d stay, but it ended up being another one-nighter (Tuesday night to Wednesday). For overlanders in need of a shower, clean clothes, and fresh produce, we recommend the following local spots.

Watch video footage of our off-roading trip to Misión San Borja on our Instagram Story.

We’re grateful to our friends at @vibesofpanama, who told us about their stay at Las Cazuelas. Las Cazuelas is a restaurant that will sometimes allow overlanders to stay the night if they patronize the restaurant.

We had a delicious breakfast, plus two other stop-ins for afternoon coffee and late night wine (they’re open until 10 p.m.).

In return, we got to park our Jeep behind a locked gate for the night. On one side, the door into the restaurant. On the other side of the lot, a small concrete structure with a shower room and a bathroom. Excellent hospitality!

They even let Eric use the hose to get some of the mud off our Jeep that we collected on the road to Misión San Borja.

The largest mercado in town is Super Mercado Sonora. We were surprised by how large it was! Definitely the largest place for groceries since Calimax in San Felipe.

We got excited when we found a big container of mixed nuts, which is Eric’s go-to snack. There wasn’t a price listed. When the cashier rung it up, the cost equated to about $25 USD. No gracias!

We were hoping for a lavandería that could wash our clothes in about two hours, so we could get back on the road. Lavandería Leon was recommended, but it was going to be a few hours.

So we went around the corner to a tiny place where the señora took excellent care of us. In about two hours, she had our load of laundry washed, dried, and folder for 120 pesos ($6.50 USD).

I’ve been trying to find the name, since it wasn’t on our receipt. I believe it’s on Avenida Domingo Carballo Felix, northeast of Lavandería Leon. It’s a small blue building with white bubbles painted on it.

Other than Siete Filos at Campo Archelon, Caprichos is the most charming coffee shop I’ve been to in Baja. My chai latte was killer good. The Wi-Fi, on the other hand, was painfully slow.

We’ve learned Wi-Fi is the most temperamental thing in a region filled with reliable happiness. Some days the Internet works, and others it inexplicably doesn’t.

We also stopped at the local panaderia (bakery) and neveria (ice cream shop). Regretfully, we were enjoying ourselves too much to note the name of the panaderia. The neveria is called Yoly Paleteria and Neveria.

The good news is you can ask around to find either type of treat in Guerrero Negro! Eric told me today that he only comes to Mexico for the panaderias (tongue in cheek). Finding one is always fun for us.

What Did We Miss in Guerrero Negro?

Surely there are some who will read this and think, “That’s all you did in Guerrero Negro?” Here’s the thing. We’ve been traveling full-time for six years. Sometimes we have the energy, money, and interest to play tourist. Other days, we just want to go grocery shopping.

It’s impossible to sustain a lifestyle of being a tourist everywhere we go. Next time we visit Guerrero Negro, it may be a different story! Let us know what we should do next time–maybe on our trip back north?