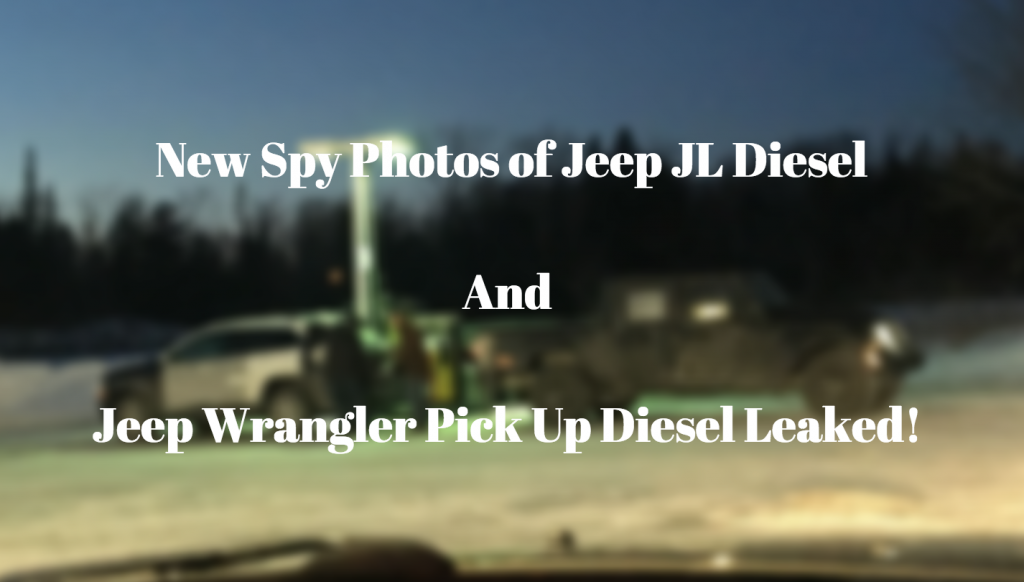 This article belongs to us and was originally published on our blog, Jeepsies.

Imagine our excitement when a Jeeper friend in Michigan spotted the Jeep team at a fuel stop filling up a Jeep JL Diesel and Jeep Wrangler Pick Up with, well, DIESEL.

And she sent us photos!

The long awaited Jeep JL Diesel and Jeep Wrangler Pick Up truck are on their way. Jeepers everywhere have been waiting not-so-patiently on these two vehicles for what feels like forever.

After all, it was back in 2006 when the CEO of Fiat Chrysler Sergio Marchionne told the world, via The Detroit News, that the Jeep Wrangler Pick Up was coming.

And it wasn’t until 2017, when the Jeep JL Diesel was officially announced.

We’ve all been waiting, many of us with pink slips in hand, ready to trade in on a diesel option.

Even those that don’t want to admit it are thinking about it… trust me.

By now we’ve all seen the photos of the gas version of the JL, many of us have been lucky enough to have seen them in person, some folks have them, even fewer folks have had a chance to ride in one on the trails.

But the gas versions are out there. Believe it or not, it is already old news. I personally saw a Jeep JL gasser this last weekend rock crawling out here in Texas.

What is NOT out there, at least not available to the general public, is this little guy, the Jeep JL Diesel.

Announced at the 2017 LA Auto show, the Jeep JL Diesel was promised to have a 3.0 Liter V6 EcoDiesel with an 8 speed automatic transmission. This set up claims to provide 260 horsepower and 442 lb-ft of torque.

Yes, you read that right, 442 lb-ft of torque! This is an insane number for a Jeep Wrangler. Any Jeeper will tell you that horsepower in a Jeep is secondary to torque and this is a game changer.

This little bad boy, the Jeep JL Diesel, was spotted in its natural habitat (a gas station) filling up the tanks.

There are also still rumors out there, believe it or not, about a plug-in hybrid Jeep JL option that supposedly will be available in 2020.

We’ll see about that one… no clue yet, so don’t ask us.

Now the Jeep Wrangler Pick Up is something that EVERYONE has been waiting for!

Rumor has it that Jeep will be reviving the name “Scrambler” for this bad boy, though that is not confirmed to our knowledge. The Jeep Wrangler Pick Up is supposed to be in production sometime late in 2019.

We only got one photo of the diesel Jeep Wrangler Pick Up from our friend, but it is a great shot.

There are too many rumors out there on the Jeep Wrangler Pick Up.

Everything from a 2.0 liter 4-cylinder, direct fuel-injection aluminum, block engine with a twin scroll turbocharger putting out 300 horsepower to a 4 cylinder 368 horsepower version, to even a Hellcat 707 horsepower engine.

But don’t hold your breath on any of this.

Jeep is pretty tight-lipped as of now on anything related to the Jeep Wrangler Pick Up.

The truth is that only the folks who know, really know. Unless one of our readers has seen something we haven’t, officially from Jeep that is. If you do, hit us with a contact form.

Where was the Jeep JL Diesel and the Jeep Wrangler Pick Up Spotted?

Our friends, Rebecca and Justin Schmidt, were out in St. Ignace, Michigan at a Shell station at around 6pm on Tuesday January 16, 2018 when they spotted both the Jeep JL Diesel and the Jeep Wrangler Pick Up filling up with diesel.

Justin was a bit too excited to take photos, but Rebecca was quick with her phone. Thanks y’all, for your permission to post your photos first here on staging2.hourlesslife.com!

Our friends told us that there were also 7-8 other Dodge vehicles there including a 5500 Ram Truck and a number of SUVs.

There is supposedly a testing facility somewhere between St. Ignace and Brimley, Michigan where Rebecca and Justin believe the Jeep team may have been heading to.

We can’t wait for the Jeep JL Diesel and the Jeep Wrangler Pick Up to be released to the public and also to find out all of the juicy and specific details on both.

Personally we at staging2.hourlesslife.com love our 2014 Jeep JKU Rubicon “GUARDIAN,” and don’t have any plans to trade him in… but that diesel though… wow.

That just may be temptation enough.

Comment with your thoughts, let us know what you think of the upcoming Jeep diesel releases.