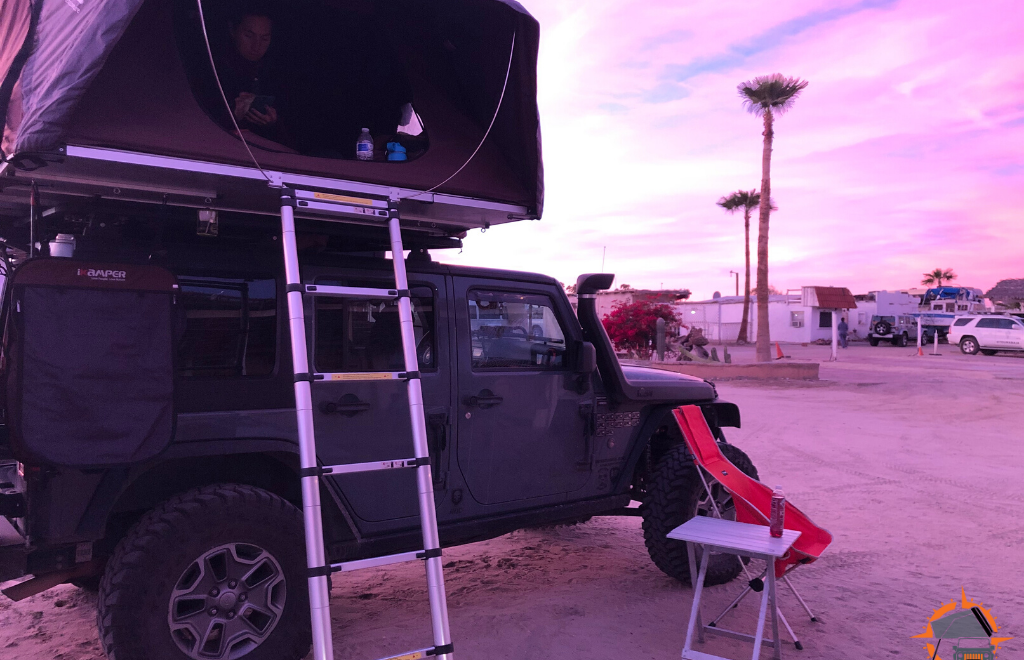 Wednesday morning, we pulled into San Felipe after driving across the Baja Peninsula on Mex 3. Between the colorful Sea of Cortez, wide beaches, and beach bars every arm’s length, I had reached the Baja of my imagination.

We finally slowed down and spent a couple of days in this small town, filled with expats and tourists from all over the world–but especially the United States. It’s reminded me a bit of San Miguel de Allende in Mexico’s interior, where you seem to hear just as much English as Spanish.

While I’m hardly an expert, I want to share our experiences in San Felipe. Just over two hours from the Mexicali border crossing, it’s an accessible and manageable first look at Baja, for those of you who are new to Mexico and/or overlanding.

Where We Stayed in San Felipe

We found out about Victor’s through Xscapers, a membership organization we’re part of. Xscapers provides resources and networking opportunities for working-age RVers, and we were fortunate to attend the very first event back in 2015.

We drove straight to Victor’s when we arrived in San Felipe, and met the hospitable Lili. She put us in the back corner of the sizable campground, next to a roofed patio with a hammock.

Our spot had a peek at the ocean, and we were right there if we rounded the lot next to us.

Pros: the margarita at the bar was incredible. Unlike the one I had on the malecón, it was fresh–not from a mix (bleh). Breakfast was served in the morning right there at the campground, though we didn’t try it. The bathrooms were admirably clean. Our hosts were friendly and gracious.

Cons: our dry camping spot was a little pricy at 400 pesos ($20 USD). Having said that, we were basically right on the waterfront within walking distance of town. The Wi-Fi was not usable, even early in the morning. But that may have been because of the large group of working RVers there!

What’s not to love about La Palapa? Located on the north side of town (Victor’s is on the south side), it’s an intimate campground with only a few spots and very friendly people.

Victor, the caretaker, has been wonderful. He parked us right by the bathrooms/hot showers. We have a huge ramada, which is basically a two-story patio. If there’s a glamping version of overlanding, then I feel like this is it.

This spot is a little less expensive than Victor’s, at 300 pesos ($15 USD). We are at the entrance to the park, which is farthest from the water. But we don’t mind. The wind coming off the Sea of Cortez has been really cold, and it doesn’t reach us here. Plus, we have a nice view of the water from the second story of our ramada.

No cons come to mind. The Wi-Fi here is solid–probably the best we’ve found in town (though Mariscos La Morena may rival it–see below).

Where We Ate in San Felipe

We’ve had two meals out in San Felipe. Our first day’s dinner was at Taco Factory. This is where the aforementioned mix-margarita happened. But in better news, we enjoyed the pastor and carne arrachera tacos, and the queso fundido con camarones (melted cheese with shrimp) was good.

For the equivalent of $26 USD, we probably wouldn’t return. But it’s definitely a popular spot right on the malecón.

Our second meal was lunch at Mariscos La Morena. This place has the most Google ratings of any place in town, over 500. We really enjoyed our meal here. I had chilaquiles–some of the best I’ve ever had. Eric had bacon-wrapped shrimp, and Caspian had scrambled eggs with a generous portion of ham.

Again, not cheap at the equivalent of $30 USD. But there was free Wi-Fi and it was pretty fast. We used the opportunity to update our phone apps. ?

What to Do Around San Felipe

If you’re an overlander with a 4×4 vehicle, you can’t come to the San Felipe area without visiting Valle de Los Gigantes. I’ve been wanting to go for a while, but I didn’t know just how much we’d enjoy it.

Entry is 200 pesos ($10 USD) per vehicle. Non-4×4 can only drive up the road a bit, before getting out to walk around the giant cardón cacti. But for us fortunate ones, the valley is our playground. We had a blast taking random, unmarked trails through the sand, and finding out where they led. We even got to do some rock crawling up a hill, that led to a beautiful vista of the valley.

And can you camp overnight? Maybe. The caretaker said we could camp as a solo vehicle, but we’d have to get permission to camp as a group. The answer is no unless you ask!

Sidenote: I happen to be obsessed with saguaro, which has many similarities to cardón, due to our time in the Sonoran Desert around Tucson. For everything you never wanted to know about saguaro, read this article I wrote on one of our other blogs: 6 Reasons to Be Amazed by the Sonoran Desert’s Saguaro Cactus.

Other Helpful Notes for Overlanders

I mentioned our Internet woes at Victor’s RV Park. We ended up packing up camp by 8 a.m. and relocating to a local coffee shop called La Taza. Though the Internet there wasn’t fast, it was slightly better than usable and we were able to get our work done. Totally a lifesaver.

The biggest grocery store in town is a Calimax, which should have virtually anything you need. There’s a meat counter, produce section, and bakery.

We had an excellent experience getting our laundry done at Lavenderia Express. We paid a mere 80 pesos ($4.30 USD) for a big load to be washed, dried, and folder in two hours. In the interior of Mexico, we could barely get laundry done that fast if it was self-service (which most Mexican lavanderías are not).

We’re so grateful to our Mexico City friend Chepo (see our Sierra Gorda adventure last year) for connecting us with Alejandro and Anna of @vibesofpanama. This beautiful couple is traveling from their home of Panama all the way to Alaska. They came to visit us at La Palapa, and we spent a wonderful evening together!

Join us as we head south this weekend! We may have some radio silence, since we expect to be off-grid. But you know you’ll hear from us on the flip side.