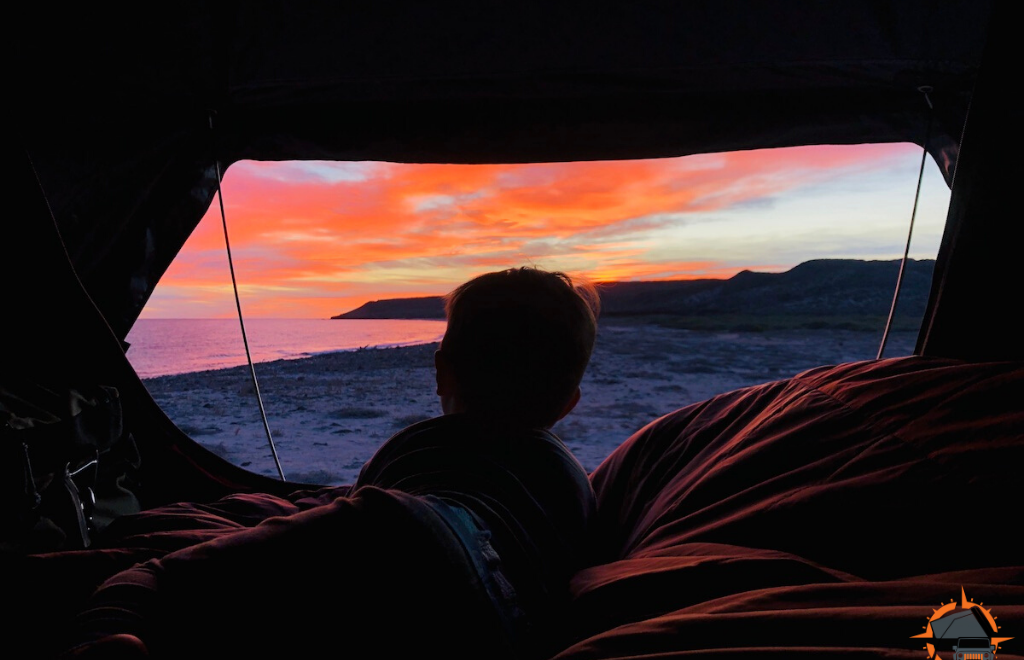 “Beware of flowers in the desert.”

Another weekend, another marvelous wild camping spot on the Baja Peninsula. After being tempted by the Punta Chivato camping spot on iOverlander, we decided another nearby location called Puffer Fish Beach would probably be more remote. It was, and we basically had it all to ourselves with two other rigs in the distance at the opposite end of our small bay.

There was no cell service there, so we were blissfully off-line from Friday afternoon to Sunday morning.

On our way from San Ignacio to Puffer Fish Beach, we had a quick stop-over in Santa Rosalía. We didn’t do it any justice, since I didn’t feel like walking around yet.

We quickly visited the famous panaderia, El Boleo, then walked around the corner to El Muelle where Eric ordered a pizza. I did a quick grocery shop on the way out of town. We know we missed pretty much everything, but we’ll have to cover it when we come north again.

Sidenote: The military checkpoint in Santa Rosalía was the second strictest we’ve encountered in Baja. Our Red Oxx duffle bag in the backseat had a dog tag-style tag on it, which is part of the Red Oxx branding. The soldier at the checkpoint kept asking Eric whether he was part of the Army. After some explanation, we were let through.

The “road” to Puffer Fish Beach was not what we expected from iOverlander reviews. There was no need for 4×4 or high clearance, though there’s one rock descent (arriving) and ascent (departing) that a low clearance vehicle would have to take carefully.

One iOverlander review mentioned 4×4 was needed because “the shells can be slippery.” I have no clue what this could refer to, as the whole road in is packed sand and you don’t need to drive anywhere near the driftwood/rocks on the beach to find a good camping spot. Airing down would have made for a more comfortable ride, but we didn’t bother.

We decided to park close to the northern rock peak, though that area lost sun earliest in the day. We hypothesized the cliff would provide some relief from the cold wind blowing off the water.

However, there was something we didn’t bargain on: visitors from the flowers growing at the bottom of the rock hill (insert horror movie soundtrack).

Our Weekend at Puffer Fish Beach

We arrived late afternoon on Friday. While I rested in the roof top tent, still feeling sick, Caspian helped Eric make a beautiful fire pit. They collected driftwood from the beach, and I came down for a camp fire. We called it a fairly early night, so we could all rest.

Saturday morning, we experienced a stunning sunrise from our tent. Sometimes we feel like we’re living in a magazine or novel, and this was one of those times.

And what did we do all weekend? Other than normal life tasks like cooking, cleaning, and tending to my little guy, I did some reading for the first time since we arrived in Baja.

Eric worked on camp improvements and organized our supplies. We put up our Rhino Rack Batwing awning and Eric experimented with making a wall from our tarp. We’re seriously considering saying adios to our iKamper annex, which we don’t seem to use enough to justify the footprint and weight. Perhaps we’ll invest in Rhino Rack’s zip-on walls for the awning. Any thoughts?

Caspian had the time of his life. A large rock became his house, with a “garden” all around it. A slingshot-shaped stick was a “Cantelouper,” which evidently is a gardening tool. He reveled in hiking over the large rocks by the beach. He even stood on a rocky crag normally occupied by gulls, spread his arms, and shouted to the ocean, “I’m Caspian!”

He *loved* beach-combing, building the fire pit with Daddy, decorating it with shells, and collecting wood. He was just thoroughly in his element.

Beware of Flowers in the Desert

We did experience a beepocalypse. On Saturday when I was enjoying a cup of coffee (in a Yeti with a lid), Eric and I noticed a couple of bees. Before too long, we had a swarm of bees at our camp–and we had no idea why.

As I tried to clean up our dish station, which seemed to be attracting them, I told Eric I thought they were thirsty. Sure enough, the bees were being attracted to every drop of fresh water in or around our camp.

After rushing to clean up, we escaped camp, hoping the bees would disperse while we were gone. We did some beach-combing and it was a thrill. I grew up in a beach city (Corpus Christi) and could never understand the concept. Evidently, you should pick a beach with things worth combing through.

I have no good camp cooking to report. I ate nothing on Friday other than a muffin, and kept it simple for the rest of the weekend. Both Caspian and I gradually started to feel better, though.

On Sunday morning as we packed up, we had higher wind than we’d had all weekend–but nothing like Bahia de Los Angeles. We had good protection behind the Jeep. It would’ve been even better if we’d parked with our tent shell directly against the water/wind, but we wouldn’t have been able to see the sunrise that way!

Let us know if you have any questions about Puffer Fish Beach. And stay tuned for our adventures in Mulege, Loreto, and beyond! (I’m working hard to catch up.)