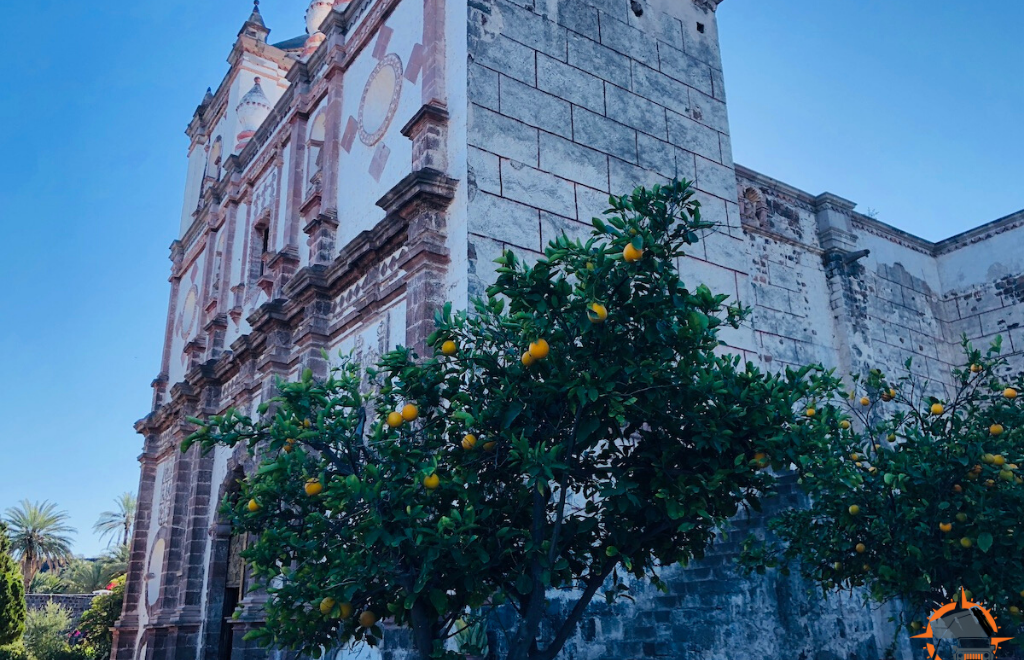 Now south of Guerrero Negro, we’re officially in Baja California Sur–the southern state on the Baja Peninsula. While we’ve enjoyed most of our stops so far, this part of Baja seems to be taking on more exotic charm. And nowhere have we felt we’re really in Mexico more than the small town of San Ignacio.

Leaving Guerrero Negro and heading towards San Ignacio, we were unmistakably burnt out. We’d slept in eight places in nine days, in six different towns. All while juggling work commitments, bad Internet, less than perfect weather, and an active toddler.

So I did it. I booked our first Airbnb in Baja.

Now, this is not something I’m ashamed of. My opinion of hotels and rentals while overlanding has changed in the past year. But I’ll get into that more in a minute. For now, I’ll start at the beginning: we had to spend a night at a San Ignacio campground, before we could get into the Airbnb.

Watch video footage of our time in San Ignacio on our Instagram Story.

We checked out Rice and Beans on our way into town, since it seems to be a favorite of overlanders and racers. But the Wi-Fi wasn’t going to cut it during the work week, so we moved on to La Casa de Ciclista.

From the name alone, you’d think only cyclists are welcome at La Casa de Ciclista. But this isn’t the case at all! Though there isn’t a lot of room for parking overland vehicles, we were the only ones there (a backpacker arrived after we did). So we had plenty of room to pull our Jeep into the small yard for 150 pesos/night ($8 USD).

We felt so welcome and comfortable here. Our patio was against the fence, so we had a sense of privacy (as much as one can when living out of a roof top tent). There was a clean bathroom with a shower around the corner. There was an outdoor sink for washing up, and even a washing machine with a clothes line.

We were so comfortable, in fact, that I was kicking myself for spending the money on an Airbnb. We would’ve happily stayed at La Casa de Ciclista another night…

Our hostess drove us into town because she was going out anyway. She dropped us off at the zocalo (town square), where we soaked in the surroundings.

Since spending so much time in interior Mexico a year ago, we’ve been missing that Mexico we remember. Though Baja has its charms, it hasn’t satisfied our nostalgia. That is, until we arrived in San Ignacio.

Small shops and restaurants surrounded the square. Stunning Misión San Ignacio dominated one side, drawing all eyes to itself. After walking around the perimeter of the square, we ended up at the mission. We walked the grounds and wandered inside. It truly is beautiful in its architecture.

There were two policemen nearby, so Eric asked their recommendation for dinner. They said Rancho Grande on the square is good, and the place tourists visit most often. But La Huerta off the square is also very good, they claimed, and not as many people know about it.

So we picked La Huerta.

Located adjacent to Hotel La Huerta, this restaurant was a big surprise in such a tiny town. The modern dining room was immaculate, with table clothes on each table. After two weeks in Baja, the bathrooms seemed so clean we would’ve slept on the floors. ?

But the food is what really impressed us. Everything was so good, from Eric’s steak plate to my grilled fish. I was surprised the margarita wasn’t up to my (snobbishly high) standards, given how good the food was. But I guess you can’t win ’em all!

The cost for our huge dinner, including two adult beverages and tip, was 645 pesos, or $35 USD.

The next day, after we checked out of La Casa de Ciclista, we had lunch at Rancho Grande. The outdoor tables are charming because they overlook the pretty square and towering mission. And the food was good. Eric had a seafood cocktail, Caspian had quesadillas, and I snacked on some guacamole.

This margarita was even more disappointing. I’m pretty sure it had some kind of lemon/lime soda in it–definitely something carbonated.

Anyway, the atmosphere is what we were after, and we weren’t disappointed. We even met a wonderful couple with a house at Gonzaga Bay, on the way out to Alfonsinas. They kindly said we could visit any time!

After our late lunch at Rancho Grande, it was time to check into our Airbnb. I really can’t say enough good things about the unit itself. It was the cleanest we’ve ever stayed at and the interior design was magazine-worthy.

There are several rooms available, and ours had an odd lay-out. Our two beds were in an open loft. A half bathroom was down the spiral staircase, with a living room and kitchen open to other guests between 7 a.m. and 9 p.m. Fortunately, there weren’t any guests to share with during our stay.

The back patio was a paradise for siesta, reading, or–in my case–working. Beware the bugs, though. San Ignacio is the only place on the peninsula where we’ve battled mosquitos because of the water running through town.

Alright, so this is where things went awry. Minutes after I put Caspian down for bed on Thursday night, I heard coughing I didn’t like. He was sick…really sick.

We kept him up for a couple of hours, downstairs with us where we could monitor and help him as needed. Fortunately, his little body had rid itself of whatever originally made him sick, and he fell asleep on the sofa.

I wasn’t feeling too swell myself on Thursday evening, but I thought maybe it was sympathy or the fact I’ve always had a weak stomach. Unfortunately, Friday when I woke up, I knew Montezuma was taking revenge on me, as well.

I didn’t get sick like Caspian, but I did have an upset stomach for a couple of days. I also had intense fatigue and ended up going back to bed for a couple of hours on Friday morning.

Remember how I was regretting reserving the Airbnb? Someone was watching over us here. If we weren’t in a rental, then everything would’ve happened in our roof top tent, in our sleeping bags (the only bedding we have). And it would’ve happened at night, likely without hot showers available.

Instead, we had separate beds, excess bedding, a hot, clean shower, and generous hosts.

I am unspeakably grateful the ONE night we’ve had an Airbnb in Baja was the one night we needed it most.

Are You a Real Overlander If You Stay at Hotels?

And what if Caspian and I hadn’t gotten sick? In my opinion, it’s okay to spend a night in a hotel, hostel, or rental while overlanding–just because you want to.

There is an important piece to overlanding which is the ability to camp off-grid and be self-reliant. But there’s another piece that places the emphasis on the long-term journey. And sometimes, sustaining yourself over a long-term journey requires the comfort of four walls for a night.

What do you think? Would love to hear your perspective in a comment.

All in all, we didn’t get to see as much of San Ignacio as we would’ve liked. As of this writing, we’ve been in Baja for more than two weeks, and San Ignacio is a contender for my favorite town we’ve visited.

Hopefully, we’ll get to spend more time in the area on our northern journey.

Previous article: Refuel and Reset for Baja California Sur on the Border in Guerrero Negro