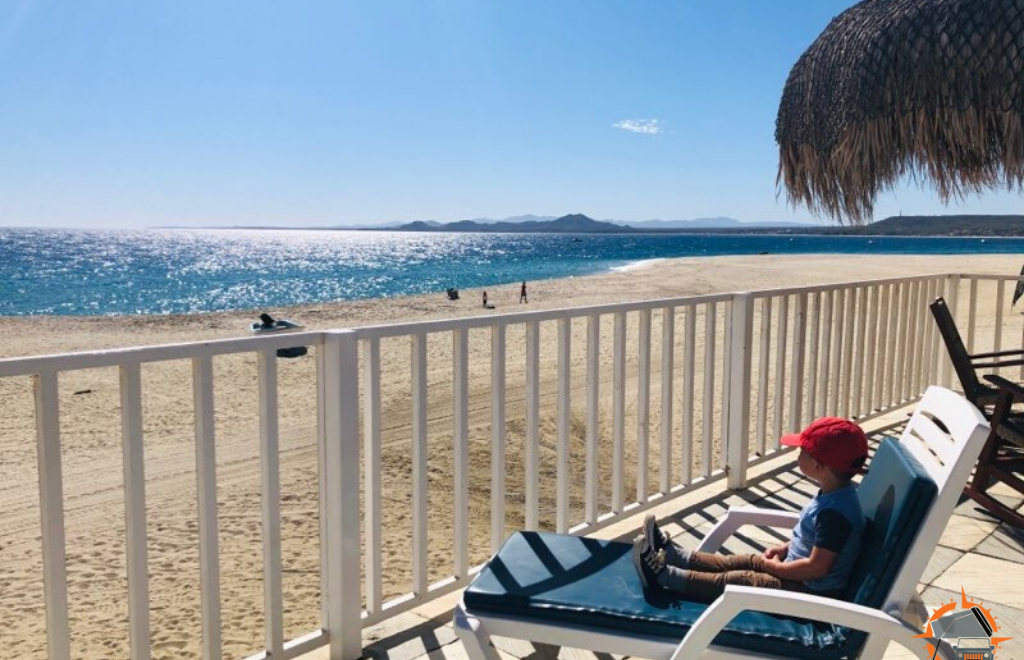 We crossed the Tropic of Cancer on our way from San Jose del Cabo to Los Barriles. In my mind this was an accomplishment. That is, until I was forced to acknowledge once again that the globe isn’t always what I picture in my head. I remembered back to our second night of a 2,000-mile trip through the interior of Mexico, which was south of the Tropic of Cancer. Geography, my bane.

I had little time to ruminate on matters of latitude. We pulled into Los Barriles and were instantly distracted by the good fortune of arriving in a new place. As you may remember from Cabo San Lucas or even Todos Santos, all that glitters isn’t gold. But some places have an indescribable quality–a depth that makes you want to stay a while.

Note: This article includes an affiliate link. If you get excited about any of the products featured on this blog, we’d love it if you’d shop via our links. This will encourage us to continue investing time in creating useful content!

Let’s put the spoiler up front. Eric and I decided Los Barriles is our favorite town on the Baja Peninsula–as of this point in our journey.

The locals are welcoming and kind. The expat community is large, friendly, and unusually helpful. The beach setting is gorgeous, a paradise for kite surfers, swimmers, and boaters. And the amenities are abundant, with enough good restaurants and margaritas to populate a long rotation.

Though the town is certainly oriented towards foreign tourism, it doesn’t have the manicured feel of Loreto or Todos Santos. Everyone just seems to be enjoying themselves.

Having said that, English is everywhere. Depending on where you are, you may try to speak Spanish to your restaurant server, and he may respond in English every time. For those trying to find authentic Mexican culture in Baja, there may simply be too many expats in Los Barriles for that.

See video footage from Los Barriles on our Instagram Story.

Where We Camped in Los Barriles

Our first time through Los Barriles, we had one night before the weekend and decided to work out of a campground called Martin Verdugo. We parked in the “tent camping” area for 340 pesos a night, or about $17 USD. There was actually only one other tent; the rest were vans.

We thought Hacienda de la Habana in Mulegé had a wonderful community sense, but Martin Verdugo may take the title. Here’s one example. I desperately needed to do laundry, but had to come all the way to the bottom of Baja to need U.S. quarters. I could only find three.

My neighbors came to the rescue. One guy had four quarters, and another couple chipped in the last quarter I needed. Before long, our clean clothes were hanging on the line…with no clothes pins because I didn’t have any. I turned around, and two different people were offering me clothes pins. It was touching, how selfless and kind everyone was.

Meanwhile, our next door neighbors had three little boys, and generously offered Caspian the run of their toys outside, even when they were away. Caspian goes without a lot when we overland, so new things to play with are always the most wonderful gift.

Our second time in Los Barriles, we walked to the sidewalk outside the campground to watch a parade. I have no idea what the occasion was, but it was a fun treat. Caspian came home with a blue balloon, Mardi Gras beads (which he used to tow his toy truck), and two pieces of candy. In other words, best night ever.

We also did some beach camping in Cabo Pulmo, which I’ll talk about more in a minute.

And speaking of beach camping, there are nice spots available right in Los Barriles. However, the wind can be strong along this stretch of the coast, which is why we opted for some cover at Martin Verdugo.

Where We Ate in Los Barriles

Los Barriles has a ton of high-rated eateries and we barely scratched the surface.

The place I recommend you skip is La Playa. It has a pretty setting right on the beach, but the food isn’t awesome and service was slow–at least on our visit. Having said that, maybe you do want a fruity beach cocktail. In which case, maybe this is a good place for you (not judging).

We’ve sometimes had a hard time finding places to refill drinking water containers in Baja. The place in Los Barriles is called Purificador El Dorado on Google Maps. We got one Rotopax and a gallon-sized jug refilled for 20 pesos ($1 USD).

The big grocery store is Super Mercado Chapitos. This was actually one of our favorite grocery stores in all of Baja, with several products we’ve missed from the United States (Planters mixed nuts!). Chapilitos Express is a smaller store on the main street, just down from Martin Verdugo. It’s not nearly as large, but it has a surprising selection of dairy and even meat.

I was really looking forward to seeing Cabo Pulmo National Park. Several people talked it up and I had quite the picture painted in my mind.

We left Los Barriles on Friday after work and started the trek to Cabo Pulmo. It’s about an hour’s drive to the north end of the park. The road gets a little rough when you lose pavement, if you haven’t aired down.

We drove to the central area of the park and I was surprised by what we saw. There was a small village with some restaurants and shops, and a half dozen or so outfitters and tour companies. Rather than a focus on the natural value of the area, the focus seemed to be commercialism.

I was disappointed. I guess I’m tremendously spoiled by the pristine condition of our national parks in the United States, though I’ve certainly seen my share of commercialism there.

The big draw at Cabo Pulmo is the reef. It’s said to be the oldest of only three coral reefs on the west coast of North America. I’ve really been wanting to snorkel in Baja, and this is where I wanted to do it.

But I didn’t. It was a windy weekend; I’m a novice; and I have a three-year-old. They’re all excuses and I do kick myself for not finding a way around them. The real Cabo Pulmo is still out there for me to find.

Having driven the main village, we still wanted to camp in the area. We scoped out what iOverlander calls Cabo Pulmo, where a number of RVs were camping (no amenities). We also drove south to Los Arbolitos, where you can camp in a gravel lot and rent snorkeling gear (basic toilets).

Though I was tempted by the possibility of snorkeling at Los Arbolitos, both locations were being pummeled by the wind. Neither were particularly scenic or private. So we kept looking and landed at Playa Miramar.

It’s a pretty beach, just inside the national park on the north side. Fishing isn’t permitted. You also can’t camp right on the beach because this is sea turtle habitat and there could be nests in the sand. We drove around a couple of times looking for a good spot.

We ended up pulling onto a dune to the north where there was a fire ring and vehicle tracks. We thought it was awesome until we took off our shoes and realized there were thorns growing all over the sand. This was a bummer because I love walking around with bare feet and letting Caspian do the same. But we made it work.

The highlight was the best fire we’ve had in Baja. We made friends with a couple from Colorado who gave us a bunch of firewood, as well as two lifelong friends, Wolf and Gary, who have incredible overland accomplishments between them.

See video footage from Cabo Pulmo on our Instagram Story.

We packed up on Saturday and decided to head back for Los Barriles. We hadn’t been on the road for long when we heard a familiar clicking and smelled something putrid.

It was our front drive shaft. Again.

You may remember we preemptively replaced our CV joint in La Paz. Here we were six days later, on the side of a dirt road with our drive shaft spilling its guts. The new CV joint had given out.

We decided to drop the drive shaft altogether. But when we opened up the tool roll, we were missing the hex bit we needed to remove the back bolts. A local ranch hand pulled off to talk, and he suggested we take the short road to La Ribera where we could find a mechanic.

So we did 30 mph to La Ribera. After driving lost around a few blocks, a construction worker offered to lead us to the mechanic. Once there, someone came out immediately, showed us where to park, and started working on the drive shaft.

It took an hour and a half, and some banging with a hammer (I’m guessing he didn’t have the hex bit either), but the front drive shaft came off. We zip-tied it to our front bumper.

Fortunately, this is #JeepLife. Even without our front drive shaft, we can use 2-wheel-drive, 4-low with our back tires, and our rear lockers. All of the off-roading we’ve done in Baja could be accomplished under those conditions–though some of the soft sand would definitely be better with 4-high.

And after a few days, we figured out a plan. A friend in the U.S. found a lightly used drive shaft for $50 from someone he knows. This friend is coming down in a week for our group overlanding trip, so he’ll bring the drive shaft then. Once we’re back in the U.S., we’ll upgrade to an aftermarket drive shaft.

See video footage of our drive shaft debacle on our Instagram Story.

Time to Start Retracing Our Tracks

After Cabo Pulmo, we spent two more nights in Los Barriles. And with that, it was time to complete Baja’s southern loop and start retracing our tracks northward.

Chances are, there will only be one more travel log from us in Baja: Santa Rosalía. After that, I’m excited to start sharing general articles on safety and security, overlanding with kids, and our top choices for Baja camping (and probably eating).

Don’t forget to chime in with your questions along the way!